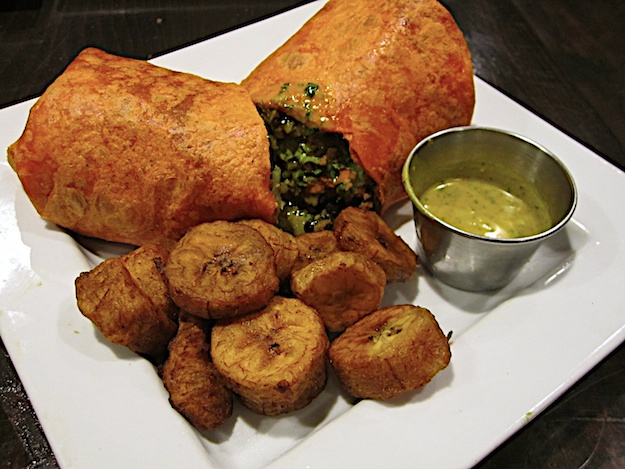 Welcome to Java Nooryani, vegan enthusiast in Brooklyn. Java moved to NYC from LA to study literature at NYU. After being a vegetarian for 10 years, she shifted to adopt veganism. She shops NYC farmers’ markets for the freshest local ingredients and celebrates the many veg-friendly offerings in her new borough. Like many Kosher Like Me followers, Java is on the lookout for veg based dishes wherever she goes.

Here’s Java’s take on The V-Spot in Park Slope, Brooklyn.

Park Slope is considered one of Brooklyn’s best residential neighborhoods to live in but it’s also just a great place to dine out. Its bustling 5th Ave block, just south of the Atlantic-Barclays Center and terminal, offers diners a large variety of eating options. Amidst this non-residential/business heavy block, I discovered The V-Spot—an all vegan Latin American restaurant. V-Spot provides healthy and animal-friendly alternatives to many dishes that traditionally contain meat and diary.

My roommate K and I went into V-Spot Thursday night for an early dinner. The vibe inside was friendly and relaxed; the staff was accommodating and attentive and the ambience was casual and cozy. K has a few food allergies and was happy to be in a restaurant with helpful servers and gluten-free options. Scanning the menu, we were excited to find so many items that catered not only to our respective diets but also our individual tastes.

Having grown up in Los Angeles, I have a taste for fresh Latin food—specifically vegetarian burritos—so I was eager to see if V-Spot’s burrito would meet my veggie Angeleno standards.

Short answer: it did. 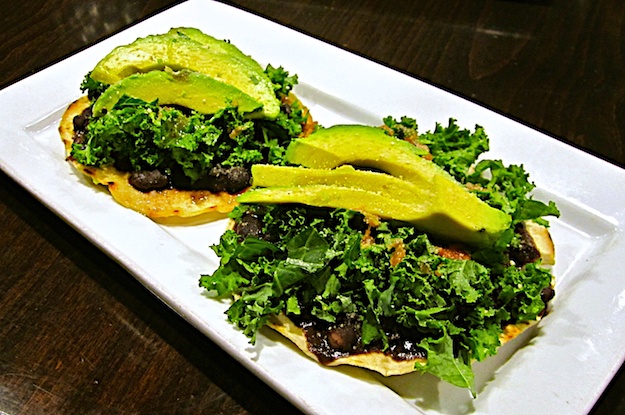 Before totally devouring my burrito, I also enjoyed some of the kale tostadas and tofu scramble empanadas. The tostadas were light and crunchy, with fresh kale, ripe avocados, black beans, and just a touch of salsa and vegan parmesan (Daiya brand cheese).

The empanadas were a heartier affair, filled with scrambled tofu, assorted veggies, tempeh bacon, and Daiya cheddar cheese. Everything inside the empanadas were seasoned well and evenly cooked but the best part of the dish was the flour pastry itself. Golden brown and striking a flaky-soft balance, V-Spot’s empanadas are deliciously filling without being too heavy or greasy.

But the V-Spot burrito was definitely my favorite dish of the night. I love a basic burrito and V-Spot offered that and a little bit more. The burrito was filled with black beans, brown rice, fresh guacamole & salsa, vegan sour cream, and something I had never eaten before: vegan carne molida.

Although I’m not a huge fan of mock meat, I decided to try V-Spot’s homemade seiten ground beef. I was happy that I didn’t take the option to substitute it out; it was a softly-chewy and salty surprise! The burrito was reminiscent of the non-vegan burritos of my Southern California childhood but without the heaviness.

My favorite ingredients in the burrito were the brown rice and black beans, which K also ordered as a side. It may sound simple, but good rice and beans goes a long way with Latin food lovers like me. With a savory aroma of spices and herbs, V-Spot’s version of the Latin staple is sure to win you over too. 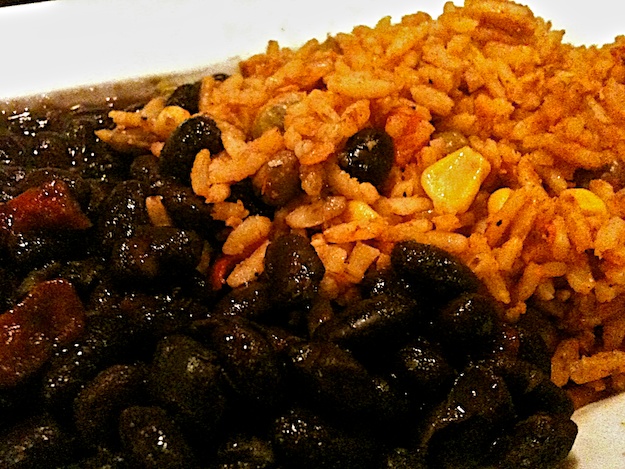 In one pot, combine tomato paste, cumin, paprika, corn, carrots, and peas with 4 cups of water and boil at low to medium heat
In large saucepan on medium heat, sauté peppers, garlic, and onions in canola oil, with salt and pepper until onions are soft.
Add the rice and sofrito to the sauted vegetables and stir for about 5 minutes
Combine everything in one pot, add cilantro, and cook till all water is absorbed
Turn stove off and keep lid on pot for about 15 minutes to let everything meld together before serving