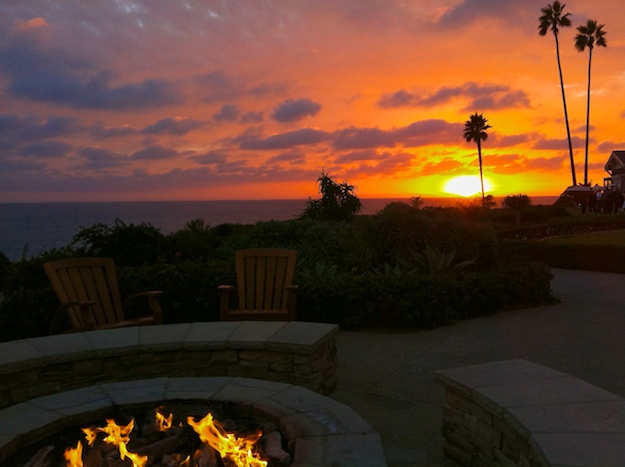 Dining after Sunset in Orange County, CA. (plus next day Vegan Quiche)

Sunset along Orange County’s coastline is an event worth celebrating. After the sun dips below the horizon, casting its glorious technicolored drama on the crashing waves of the Pacific Ocean, you’ll start looking for places to eat dinner.  Check out some of these veg  friendly spots for your evening meal between Laguna Beach and Newport Beach, CA.

Highlights for your apres- sunset meal range from vegan to veg friendly. I avoided the fish themed places, as I was already teetering on the brink of OD’ing on my daily dose of fish tacos.

The fast food (horror!) cafe in Fashion Island Mall (gasp) called Native Foods kept coming up every time I shmoozed with locals who looked like they cared about what they eat (read: farmers’ markets, more on that later). So, with a double dose of skepticism we drove to the gigundo and utterly pleasant (shocker) Fashion Island Mall to check out the vegan eats. Now I am simply green with envy that Native Foods has five locations in CA. and a smattering of others but none further east than Chicago.

“Scuse me!  What about us in the Northeast?!

While Native Foods is nothing much to look at, there are tables in the open air, beautifully landscaped, wide passages that lead to and fro in this mostly outdoor, high end mall.  I couldn’t turn down the “bacon cheeseburger” with sweet potato fries.  So, if bacon is not real, and neither is the cheese or the burger, ahem, what was I eating? 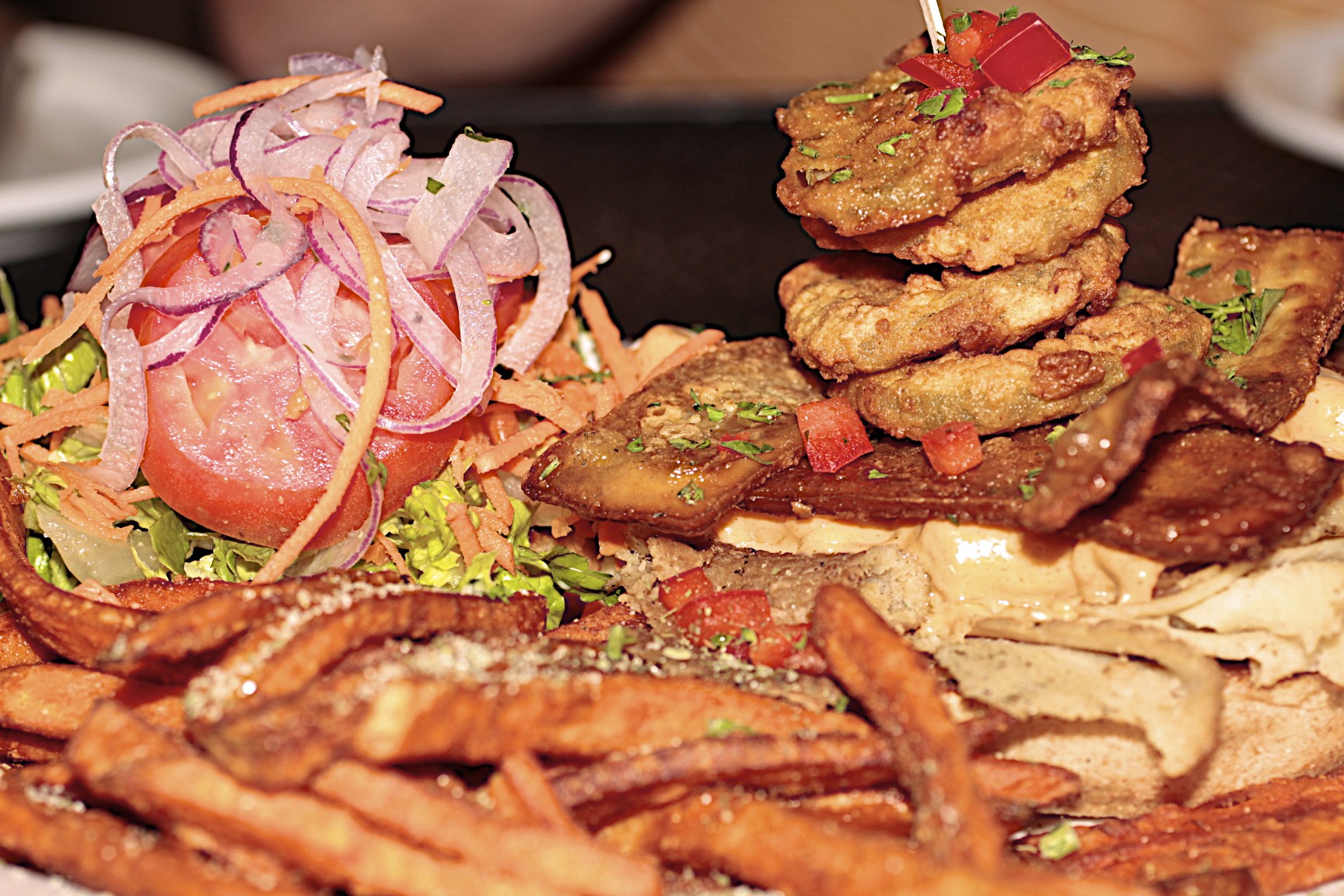 Seitan was thinly sliced and topped with melted “cheese”, a gooey and satisfying nut butter stand-in. Seitan is made from scratch daily here. It added the requisite bulk if not slightly rubbery texture. But slathered in BBQ sauce and non-dairy ranch dressing with caramelized onions and crispy shredded carrots, I was humming along happily before we slipped into the movie theatre. 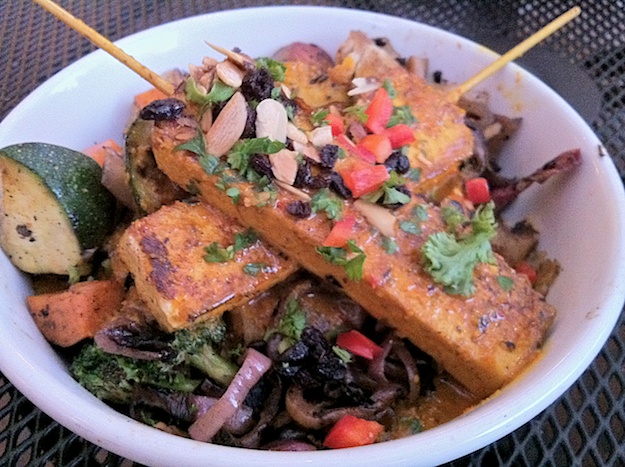 Groovy  names like Rockin’ Moroccan (Bowl) beckoned on another eve when the early fall temps fell to a chilly (yup, Californians complain about THIS) mid-60’s and even WE wanted something warming. So I opted for seared tofu “steak” on a pile of steamed greens over brown rice bathed in lemongrass and ginger-infused coconut milk curry. It was familiar and comforting (kinda like a juicy burger used to be…)

Freshly made-from-scratch drinks like watermelon fresca and lavender lemonade, garnished with fresh lemon or mint leaves and with free refills, are a good deal. We opted for different local and organic beer each time we visited, and enjoyed sipping the local brews. Each location highlights their own local small breweries and they even offer New Planet Off the Grid Pale Ale, a gluten-free ale.

At Nirvana Grille, Lyndsey Smith Rosales and her husband are the owner/chefs where vegan and vegetarian options account for about 50% of the menu. Small plates of wild mushroom ravioli and roasted poblano chiles relied too heavily on cream and cheese for flavor, but kudos to the chef for sourcing local and organic ingredients whenever possible.

Blackened seitan “Napoleon” was a stacked calorie laden dish with parmesan risotto, goat cheese, pesto and juicy portobellos with slightly bitter but not unpleasant rainbow chard. Again, less cheese would have been my preference.

I did appreciate the many veg choices, though, and had it been a weekend, I would have  grabbed a seat in their rooftop dining area and bar. Unfortunately, it was closed mid-week during this off-season. 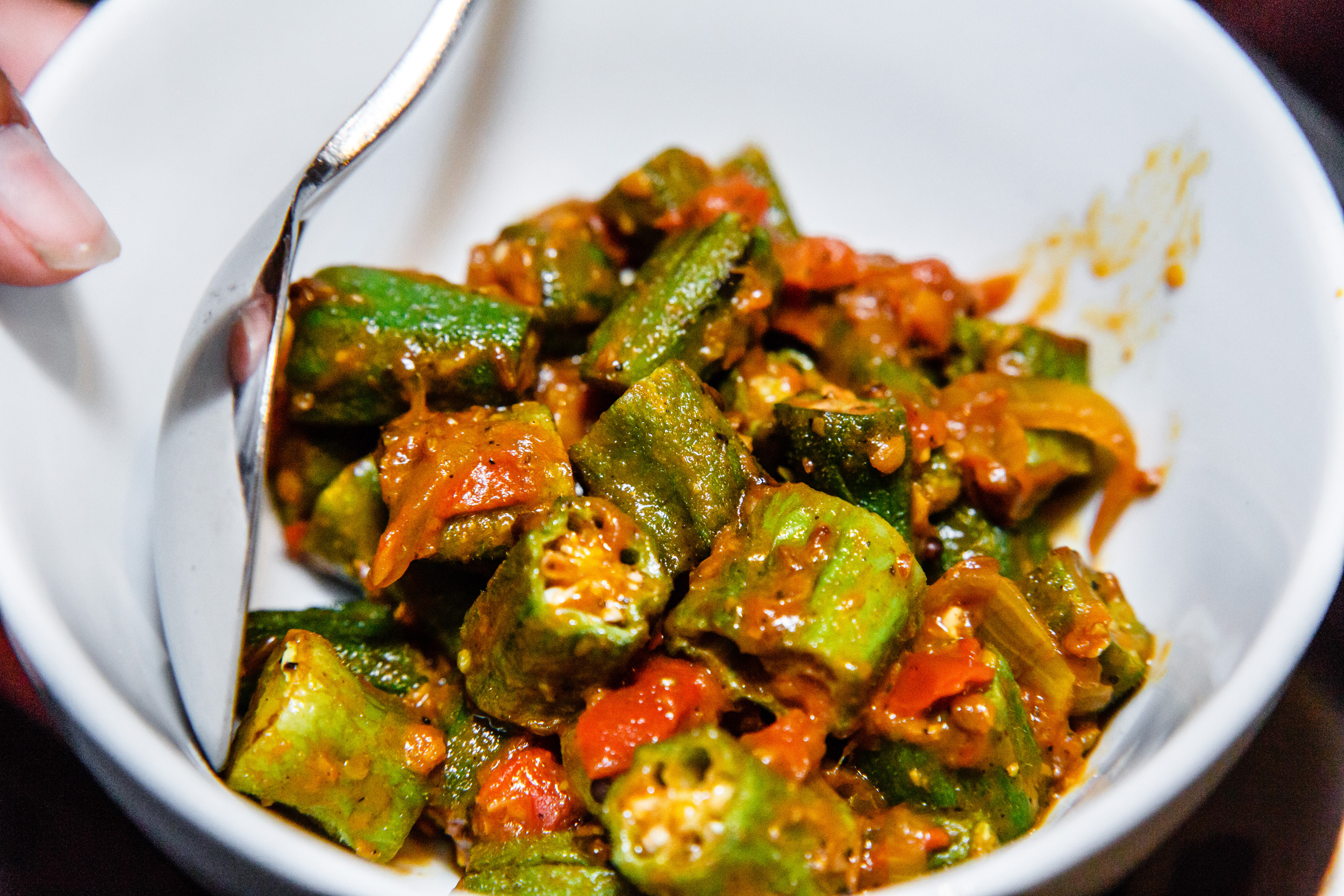 Tamarind of London brought us back to a strip shopping center in Newport Beach. I had read that Chef Alfred Prasad was now splitting his time between this CA. location and his Michelin starred (12 years running!), original location in London (Mayfair).

I was invited into the open kitchen and peered into the tandoori oven as the chef plunged our marinated salmon skewers into the cylindrical deep. Generous chunks of salmon marinated with lime leaf, cilantro, green chili and cumin were perfectly moist and boldly flavored. 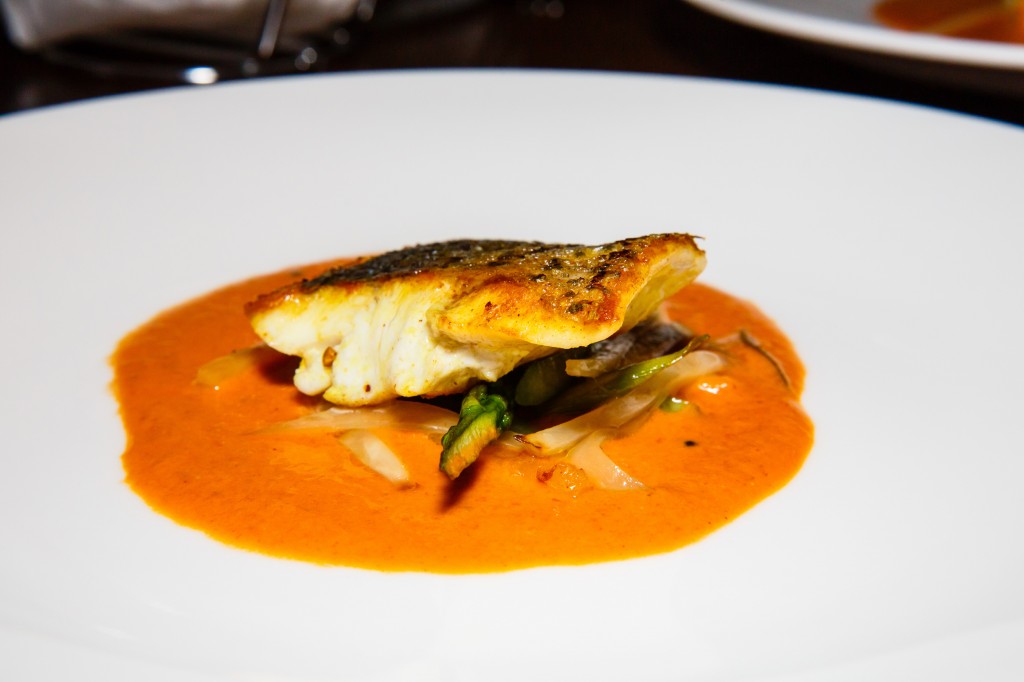 Like the sea bass, which was pan fried with curry leaves and coconut, both dishes awakened my palate and had me yearning for more of these complex flavor adventures. The chef didn’t disappoint.

Mango salad was pleasantly sweet and moistened with a honey pepper dressing, combining local rainbow carrots, toasted walnuts and coconut in this soothing contrast to some of the spicier dishes. 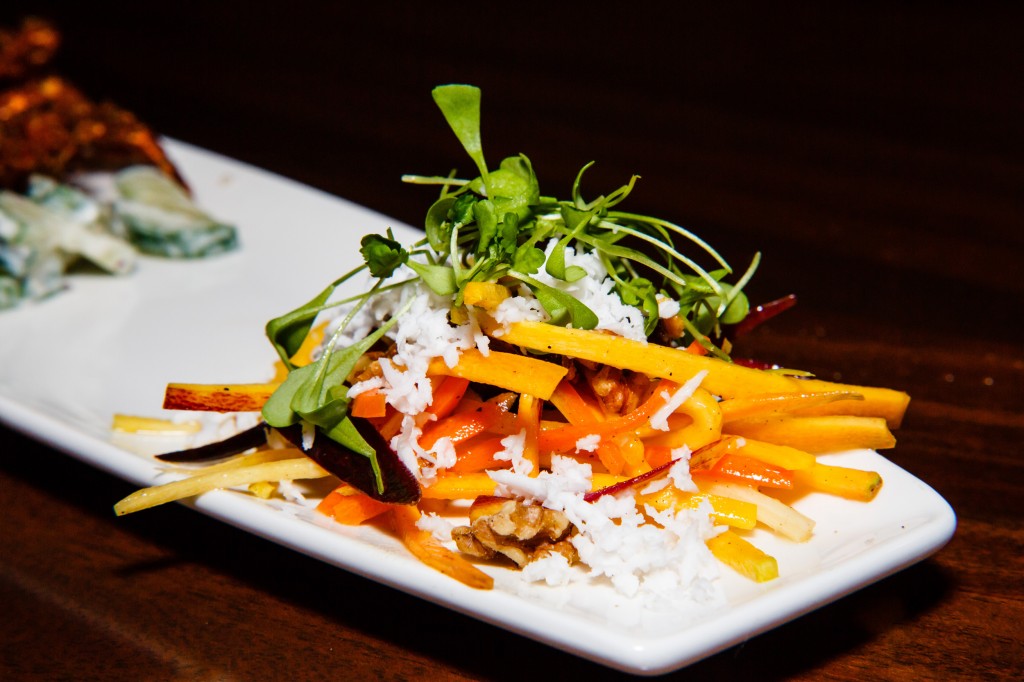 There are plenty of veg choices here, including a dense and crisp spinach potato cake which we ate with tamarind chutney and avocado raita. I prefer the tang of traditional raita to the too thick subtle nuttiness of this California version but all told, Tamarind was nearly a perfect meal, with attentive, kind service and fair prices. 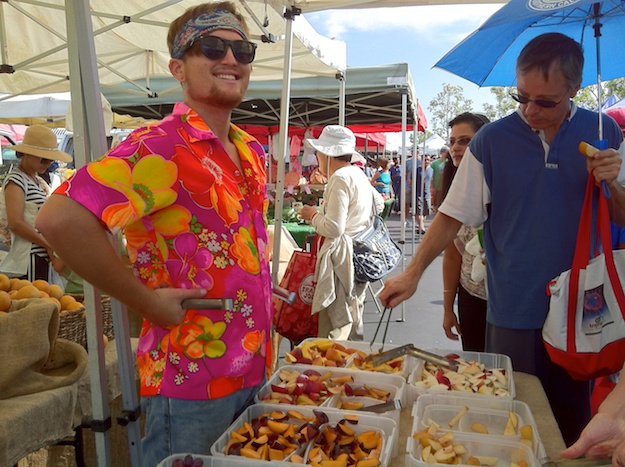 A quick mention about farmers’ markets: The Saturday market in the college town of Irvine was large and interesting with enough exotic, unfamiliar fruits to keep me asking questions. It is worth the short drive from the coast if you can pull yourself away from the beach.

Another but much smaller market in Laguna Beach had plenty of organic veggies and fruit (strawberries in October are thrilling for this Northeastern locavore), some crazy looking mushrooms and more locally prepared bread and salsas. 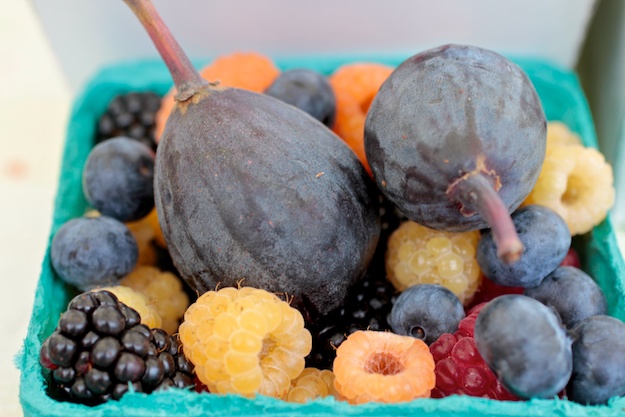 If you are heading to these parts and are kosher like me or veg,  you may want to check out these spots too.  Each of these  were mentioned to me numerous times, and although I didn’t get to them, you may want to. Be sure to let me know.

Three photos of dishes from Tamarind of London in Newport Beach are courtesy of Allen Taylor and Tamarind Restaurant.

Preheat oven to 350 F.
!Crust
lightly grease bottom of pie pan.
combine both flours and salt in a bowl, add oil and mix until combined.
slowly add water and mix.
Press into pie shell forming a crust and bake for 10-15 mins. until lightly browned. Let cool.
!Filling
Heat oil in large skillet over med-high heat. Saute onion and garlic until golden.
Stir in broccoli, cauliflower,and red peppers and saute until cooked.
In a blender, combine tofu, milk, mustard,salt,nutmeg,red peppers,black pepper,parsley and nutritional yeast.
Blend until smooth.
Combine tofu mixture with broccoli mixture in a large bowl and pour into pie crust.
Bake at 350 F for 35-40 minutes or until quiche is set. Allow to cool for 5 minutes before cutting.