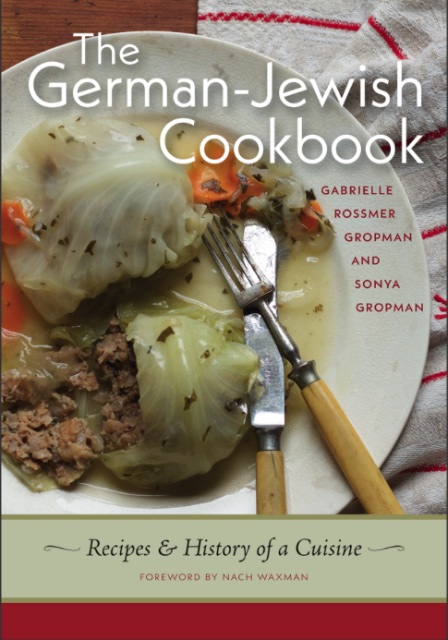 Enter to Win this Moving Cookbook/Memoir

It’s give-away time as we celebrate spring and share The German-Jewish Cookbook: Recipes and History of a Cuisine with one lucky winner. Who’s ready to learn something new?

We wrote about mother/daughter authors, Gabrielle Rossmer Gropman and Sonya Gropman, last week in our post about WHY this dive into a rich culinary history is such an inspiring resource. Simply put: by reading and cooking from this book, we’ve learned so much more about a nearly vanished community.

Check out our post here. It includes a luscious recipe for Gaby’s favorite childhood meal, Baked Rice Souffle with Cherries.

The charming and very personal stories, research and recipes illuminate a cuisine I never knew much about. This volume has prompted me to think more deeply about the Eastern European foods I grew up eating and loving.   I’ve learned that the foods of the Polish Jewish community were quite different from those of the German-Jewish community.

Why this particular cookbook would be a meaningful addition to your cookbook collection? If you have a special person in mind for this book, tell us why she/he would value the culinary history, stories and recipes here.

Please be patient if your comment doesn’t immediately appear at the end of this blogpost. We keep it safe and secure here by approving each and every comment so sometimes there’s a delay.

You may enter more than once by answering the questions we’ll pose on Instagram @kosherlikeme and on facebook.

We’ll notify the winner on April 23, 2018 and pop the cookbook in the mail ASAP.