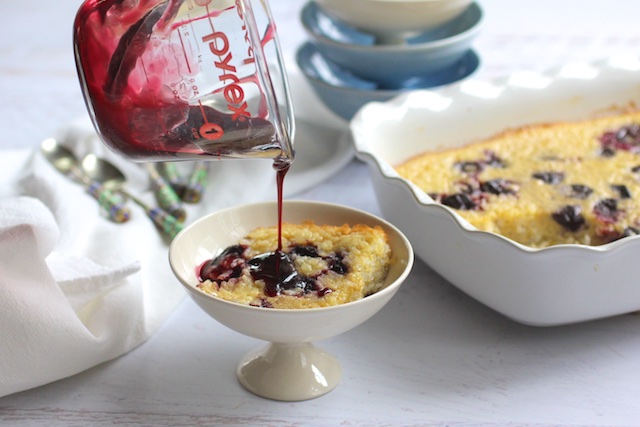 When I whipped up Gabrielle Rossmer Gropman’s favorite and “quintessential German-Jewish meatless meal” I became teary as the sweet fragrance of simmering whole milk and stewed fruit wafted through my kitchen. This simple baked rice souffle studded with cherries brought this treasure of a cookbook alive for me, with all of the loss and memories bubbling in one seemingly innocuous saucepan.

The header notes (see recipe below) explain that for Gaby, who co-authored The German-Jewish Cookbook: Recipes and History of a Cuisine, with her daughter, Sonya Gropman, this milky rice pudding was the ultimate comfort food for the kids in her family. It is old fashioned in its simplicity and would surely qualify as comfort food to kids and adults alike. Sure… who wouldn’t love dessert in the guise of a main dish?

Gabrielle and Sonya, mother-daughter co-authors, tell one story in two voices. Gabrielle, the mother, was born in Germany and came to the USA as a baby with her parents in 1939, after Kristallnacht and following her father’s six week imprisonment in Dachau concentration camp.

For a long time, she took German-Jewish food for granted, having grown up in Washington Heights, NYC. This area of northern Manhattan was “home to the largest surviving community of German Jews anywhere in the world.”

While Gaby brought the stories and recipes from a multigenerational perspective, her daughter Sonya brought her own vivid memories of her grandparents’ food, gatherings around the dining table and an unstoppable drive to research recipes and interview survivors. This riveting book is both personal memoir and documentation of a food culture that existed in all of its vibrancy for hundreds of years until the Nazi era sought to destroy the Jewish people and their rich history.

Interestingly, this mother-daugher team have an ongoing relationship with Germany. Through their travels, ranging from Gaby’s first visit to Bamberg in the 1960’s where they met former employees of their family’s business, to mounting art exhibits of her work, and more recently as Sonya participated in a magazine based photo project in Berlin, Germany is no longer just a memory.

They’ve made friends and have gained a familiarity with the people, culinary and cultural landscape there. In 2015, they revived traditional recipes as they co-taught cooking classes in Berlin about German-Jewish food.

As you read this today, they are in Berlin to participate in Holocaust Remembrance Day events.

This memoir/cookbook is organized into easy to use chapters beginning with weekday meals that include an unexpected treatment of fruit at the center of main dishes (even more so than vegetables). Familiar fruits like apples, rhubarb and berries, with an emphasis on stone fruits (plums, peaches, apricots and cherries) are often baked into meatless bread puddings and dumplings, cakes or compotes.

A chapter with 19 recipes for vegetables exemplifies the common practice of storing root veggies over the long winters. Beet and Celery Root Salad brings together wintered over ingredients brightened by early spring watercress.

The authors mention this Cucumber Salad as “ubiquitous at German-Jewish meals”. Note that sour cream can be switched out for oil for kosher keepers who would like to enjoy this with a meat meal.

Almost four pages are devoted to describing the history, technique and Gaby and Sonya’s outing to a formerly Jewish neighborhood in Oberlauringen, where they met a resident who recalls her Jewish neighbors.

Friedel Korten has lived in the house her grandfather purchased from a Jewish family in 1907. She is in her late 70’s and recalls the ceremonial bread her Jewish neighbors baked each week.

This kind of storytelling and culinary history is why I read The German-Jewish Cookbook hungrily from cover to cover:

“Over many years of baking this bread, Friedel has become a seasoned and expert Berches baker. In fact, a few years ago, during the thousand-year anniversary of this town, Friedel baked many loaves for the celebration. The Berches and how it represented the former Jewish community, became an important element of the festivities.” (page 92)

While savory dishes are plentiful in this volume, among my favorites being Sweet-Sour Red Cabbage seasoned with juniper berries and currant jelly, I’ll encourage you to purchase this volume for anyone who enjoys a deep dive into social and culinary history, or who simply wants to pay homage to German Jews and the rich culture being kept alive by surviving generations.

Holocaust Remembrance Day is an annual commemoration. This year it is observed beginning on the eve of April 11 and throughout April 12, 2018.

Watch for our give-away of The German-Jewish Cookbook, Recipes & History of a Cuisine by Gabrielle Rossmer Gropman and Sonya Gropman next week. Can’t wait to play in the give-away? Click here to buy it today.

All photos used with permission from the authors @Brandeis University Press 2017.

Disclosure: There are links on this site that can be defined as “affiliate links”. This means that I may receive a small commission (at no cost to you) if you purchase something through the links provided.

"To me, Reisauflauf, essentially a baked rice pudding, is the quintessential German-Jewish meatless meal for one simple reason—my grandmother made it regularly for dinner. It was so much a part of our family’s cooking and eating repertoire that it had its own designated baking dish—an oval Jena glass (the German equivalent of Pyrex) casserole dish that is cradled in a metal stand when it comes out of the oven. We still use this dish today. Even though we always had Reisauflauf made with cherries, this dish can be made with other fruits and indeed, the old cookbooks suggest apricots or apples as other possibilities. Personally, I see no reason to stop using cherries, especially when fresh ones are in season. Children find it thrilling to have something they think of as a dessert as the main meal. What could be better? When combined with soup or a salad, this will make a nice light meal."

3 1/2 tablespoons sugar, plus more as needed for cherry sauce

1. If you are using canned cherries, drain the cherries into a colander set over a bowl. Reserve the juice.

2. Bring the rice, milk, and salt to a near boil in a heavy-bottomed pot over high heat. Stir, lower the heat, cover, and simmer the rice for 15 minutes. There will be some liquid left in the pot. Remove from the heat and let cool.

3. While the rice is cooking, melt the butter slowly in a small pot, and then let it cool.

5. Beat the eggs in a bowl. Add the sugar, mixing well. Add the melted butter and continue beating for another minute to blend the ingredients. Add the egg mixture to the cooled rice. Add the cinnamon and lemon juice and gently fold in the cherries.

6. Empty the rice mixture into the prepared dish and bake for 20 to 30 minutes, or until the outside is light brown and a toothpick or tester inserted into the center comes out clean.

8. Pour the juice from the cherry can into a small pot. Add sugar to taste —depending on whether your canned cherries had light or heavy syrup, your sugar content will vary. Bring to a boil over high heat, lower the heat, and cook for 5 minutes to reduce the liquid.

from Liz: I used frozen sweet cherries, allowing them to thaw at room temperature over a colander.