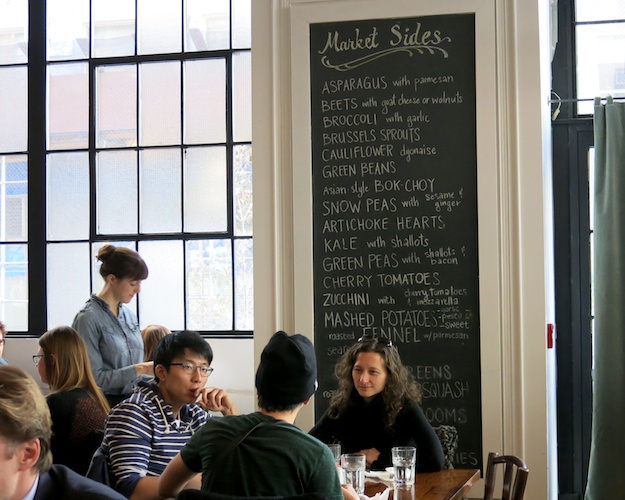 Vegetable Heaven for Omnivores, Too

I’ve fallen hard for the easy neighborhood vibe and colorful, vegetarian dishes at Westville in NYC. The reason is simple, which is a lot like their menu offerings.  Last time I dined at Westville there were 21 market vegetables offered on their daily board. Veggie sides like Curried Okra, Sauteed Kale with Shallots, and Artichoke Hearts with Parmesan are not afterthoughts here. They are front and center for those who chose, or seasonal sides for anyone wanting to add on to their generously sized entrees.

Westville has four locations, all downtown, in NYC. Owned and operated by four friends, their vision became reality with their first location on W. 10th Street in 2003. Fast forward to Autumn 2012 when they opened their fourth and largest resto on Hudson St.  The newest is the brightest with two walls of windows and outdoor seasonal seasoning. It’s also the only one that accepts dinner reservations (for parties of 4 or larger). Don’t let the lines deter you, though;  the original vision of using the freshest, quality ingredients to prepare uncomplicated and delicious dishes at fair prices still rings true and it’s worth the wait. 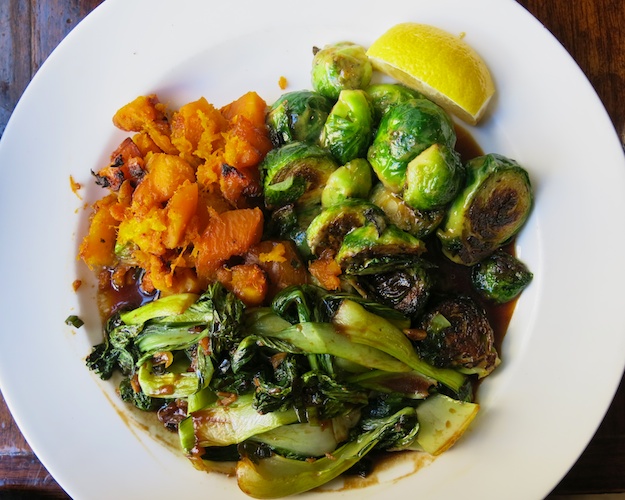 The menu invites diners to alert their server about allergies or dietary restrictions. As expected, some dishes can have ingredients held aside, but there are so many kosher friendly options that I ordered straight from the menu. At lunch recently, I worked backwards from the Market Vegetable offerings and started with Asian Style Bok Choy, Roasted Butternut Squash and Brussel Sprouts in honey Dijon. I appreciate being served a large plate of these mostly seasonal sides, all for $11. Chose one for $6.00 if you want a simple green like Broccoli Rabe with cherry tomatoes, or make a meal of these ample choices with four for $15.00. I understand the practicality of serving a selection of veggies on one plate but wish that all those flavors and sauces had not merged into a common pool. 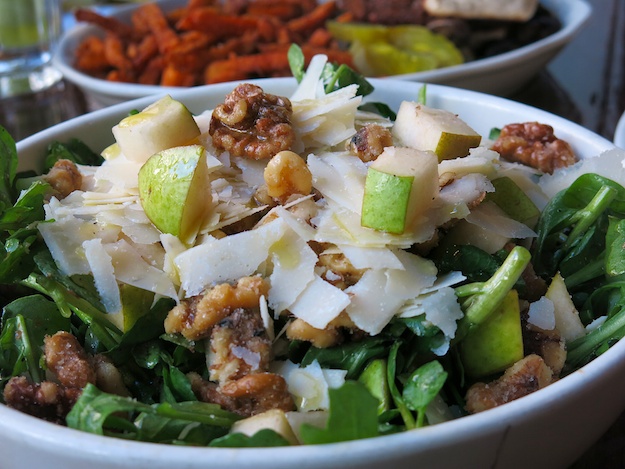 The Watercress and Arugula Salad with pears and roasted walnuts was topped with a generous (optional) layer of Parmigiano slices. A simple olive oil and lemon dressing allowed the crisp greens to shine.

There are at least seven other salads options including a great looking Greek, a popular choice, it seemed.  It was delivered with a grilled baguette with melted herbed goat cheese and looked familiarly Israeli. 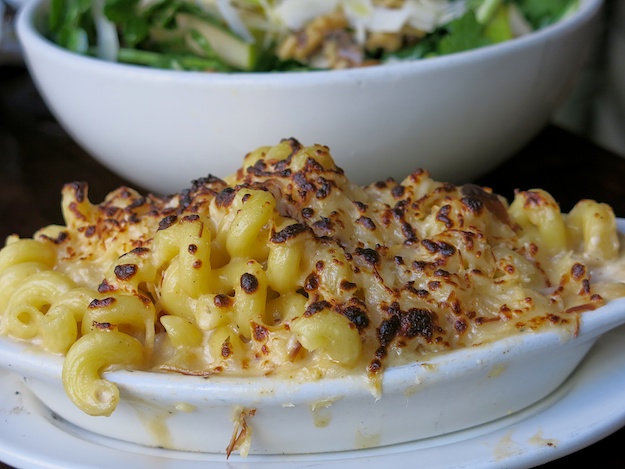 The Smoky Mac and Cheese is a decadent, creamy, gooey generous appetizer (really an entree size unless you’re a linebacker). The pasta was al dente and the top was torched and crunchy: worth the calories if you’re up for the splurge.

I had a tough time deciding between the Jamaican Jerk Salmon Burger served with sprouts, fennel slaw, fries or salad or the Veggie Burger. I opted for the Veggie Burger as I’m always on the hunt for one with great texture and flavors. 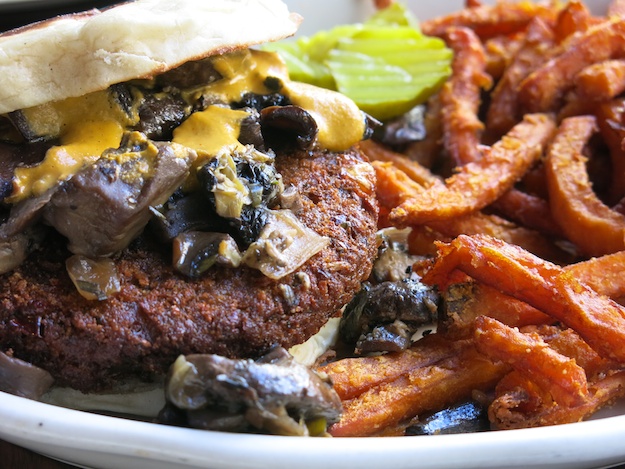 The crisp texture and crunch were a pleasant surprise. Visible bits of broccoli, cauliflower, carrots, corn and red peppers were bound with panko, resulting in an unusual and distinctive crunch. Shoestring sweet potato fries were well cooked and crisp.

Having had the Beer Battered Fish and Chips and Grilled Salmon plate  for dinner a few weeks ago ($15. and $18. including two market sides), I chose the Almond Crusted Trout this time around. 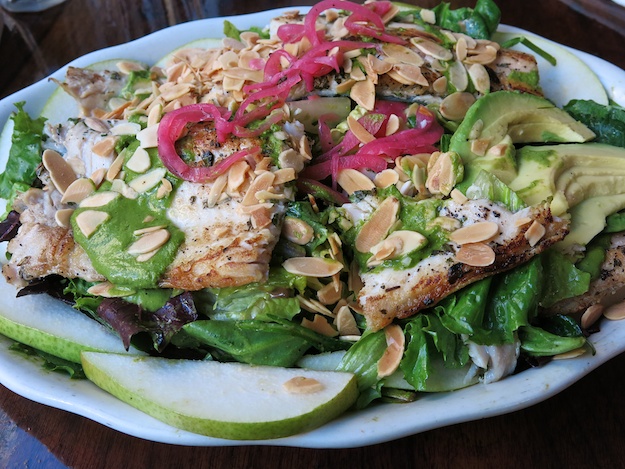 The trout was an ample portion of sauteed fish, served over mixed greens with pears, avocado and marinated red onion (the onions were so tangy and so memorable that I re-create them as a Thanksgiving side). I only wish the chef used a lighter hand with the almonds, which masked the fresh ingredients layered beneath the nutty layer.

Three of the four owners here are Israeli, as is Berty Richter, the chef. I searched for the Israeli influence in the dishes and found a typical, garlicky Fried Eggplant Salad, simmered and spicy chickpeas and grilled Haloumi cheese. I would love to see more of Richter’s Tel Aviv inspired influence (he told me he learned to roll grape leaves with his Turkish Mom when he was 10) on the menu.

All desserts are baked under the direction of one of the owner’s wives in their bakery under the Chelsea Westville location. Seasonal pies, cakes and cookies are available by special order, too, as are full size catering trays of their many options for buffet style gatherings at home or office.

For well priced, simply prepared, vegetarian and kosher friendly options, Westville can count me as one of their many fans and regulars.

Westville has four locations in NYC. For hours and more deets click here.