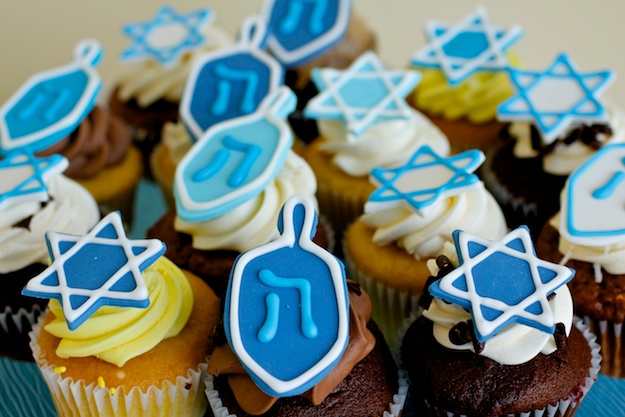 Eating Out and About During Chanukah

Chanukah has arrived!
And while there is nothing like the sizzling sounds and homey aromas of latkes on the first night of celebration, cooking fatigue may set in by night four or five. Depending on the ages of the little ones and where you live, you may feel inclined to take a break and check out these great choices for eats and treats in Connecticut and NYC.

Starting in CT. check out Cake Suite in Westport, where owner and baker Michelle Klem has prepared a riot of  sweets to bring to your party host or to enjoy with your own family.

She has made dreidl and star toppers for luscious cupcakes, sugar cookies bright with happy blue squigglies and  traditional symbols, and single bites of year round treats like ruggelach and date filled  mini mandel bread. 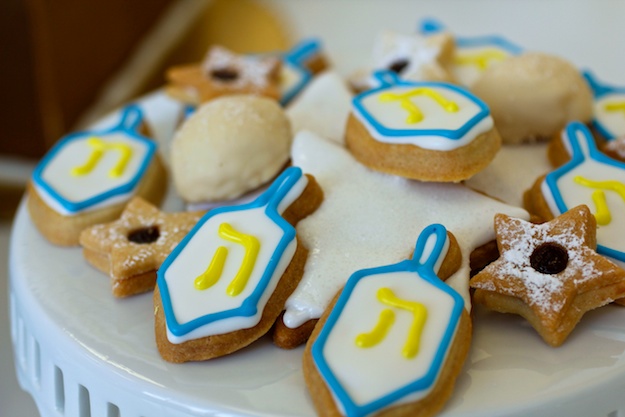 Drop by this fantastic bakery, call ahead to be sure or simply order one day in advance. Cupcakes flavors change daily but I’m hankering for tangy lemon or German chocolate cake.  Non-dairy treats are available by special order.

Also in CT. you may head  to Tabouli Grill in Stamford and Southport for an extensive take-out and catering menu.

For 16.99 per person, owner Judith Roll is offering an abundant Middle Eastern Chanukah Feast to go. It includes veg salads like hummus, eggplant and tomato salad, mujadara (rice and lentils), plus potato latkes with fixin’s for all, which means both applesauce and sour cream lovers will be satisfied cause both are provided.

If you are feeding a large crowd, trays of items like spinach and feta in phyllo, chopped salad, and baklava bites are available, too. Of course, latkes are available by the piece or dozen and are on the eat-in menu at both cafe locations.

In NYC here are some highlights: 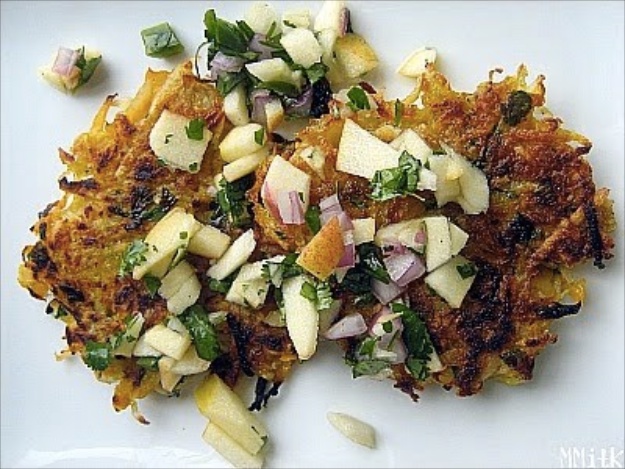 Abigael’s is kosher which means it’s a treat for those who are kosher like me. Their annual latke and beer pairings will have a few surprises but count on Chanukah specialties like smoked brisket (house smoked and drizzled in warming barbecue and chimichurri sauce), smoked salmon latkes on a bed of arugula and shaved fennel or apple/pear latkes with sweet relish and apple cider syrup. 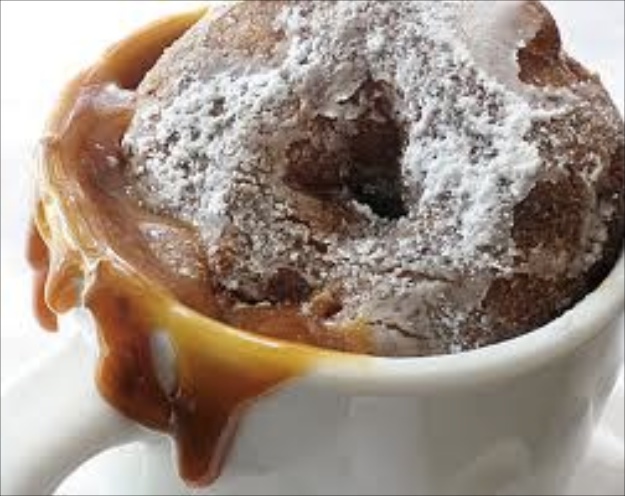 Prime Grill and Prime KO  will be serving up specialties, too, as you might expect from this Glatt kosher group in NYC.

Chef David Kolotkin has added a brisket sandwich on potato and scallion latkes to the menu. Dress that with horseradish aioli and it’s a great twist on plain ol’brisket.

At Prime KO,Chef Makoto Kameyama will be heading to the sweet side with green apple pancakes drizzled in apple cinnamon sauce, at the popular Japanese Steakhouse with a great lounge space. 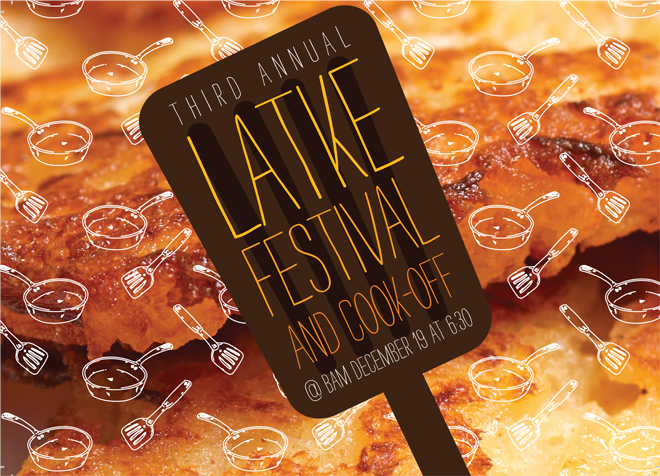 Crossing over the bridge will be well worth it for the Third Annual Latke Festival at BAM on December 19 at 6:30. It’s co-sponsored by Edible Brooklyn and $30. will buy you a world class latke throwdown with 15 NYC chefs and some brave amateurs competing for top latke.

Chefs from culinary backgrounds as broad as South American to French Bistro to Basque, will offer up their most creative version fettered with garnishes and dipping sauces that leave apple sauce in the rotting post-Autumnal orchard.

Hankering for some South of the Border flavors to wake up your taste buds? Chef Julian Medina of Toloache and Yerba Buena will once again be offering a complete Mexican Chanukah menu between December 20-28.

Readers who are kosher like me can do very well here by sticking with the veg options. Warm up with a Mexican chocolate infused Margarita, followed by guacamole de pescado ahumado, Medina’s version of guac combined with house smoked whitefish. 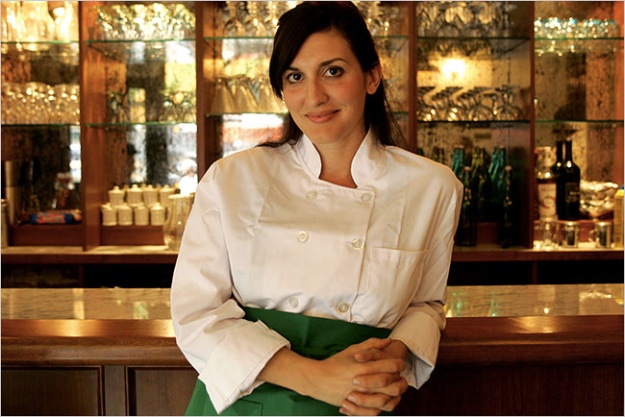 And while we are on Chanukah dishes from warmer climes, consider Eolo, where chef/owner Melissa Muller Daka has created a menu that pays homage to the former Jewish inhabitants of Sicily.  She is working on her first book about Sicilian food and wine which will include lots of fascinating details about the strong Jewish presence there, from Roman times until the Inquisition.

She has created an imagined Sicilian Chanukah menu derived from her research and deep knowledge of the region, and through culinary history she has discovered.

A complete Chanukah menu includes specialties like caponata of eggplant, carrots and olives over panelle (chick pea fritters). Cauliflower croquettes will be sizzling in requisite Chanukah oil or take a break from latkes of any kind and enjoy a richly flavored plate of fettucine with ricotta, cinnamon, golden raisins and pine nuts. Ricotta doughnuts with berry compote punctuate the meal. 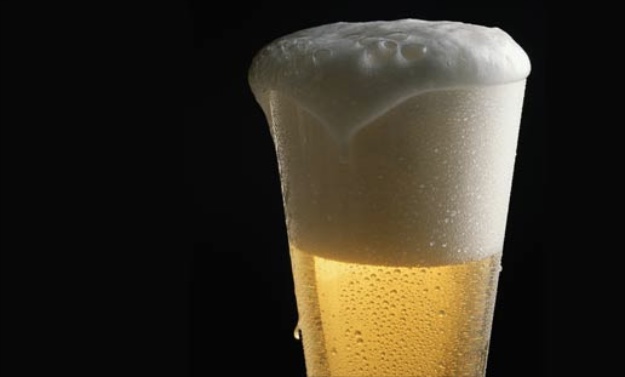 Finally, I hope to return to the 92Y/Tribeca to check out Chef Russell Moss’ latkes and beer pairings at the Beer and Latkes Hannukkah Celebration on December 22 at 7 PM.  Moss has put the party together with Brooklyn Brewery, where his nephew, Dan Moss, is the beer expert.
Expect the unexpected like pickled potato with striped bass flavored with smoking pepper chile oil and the more tame potato pancakes with beets, topped with sour cream and salmon caviar.

What are you eating this Chanukah?  Let me know in the comments section!