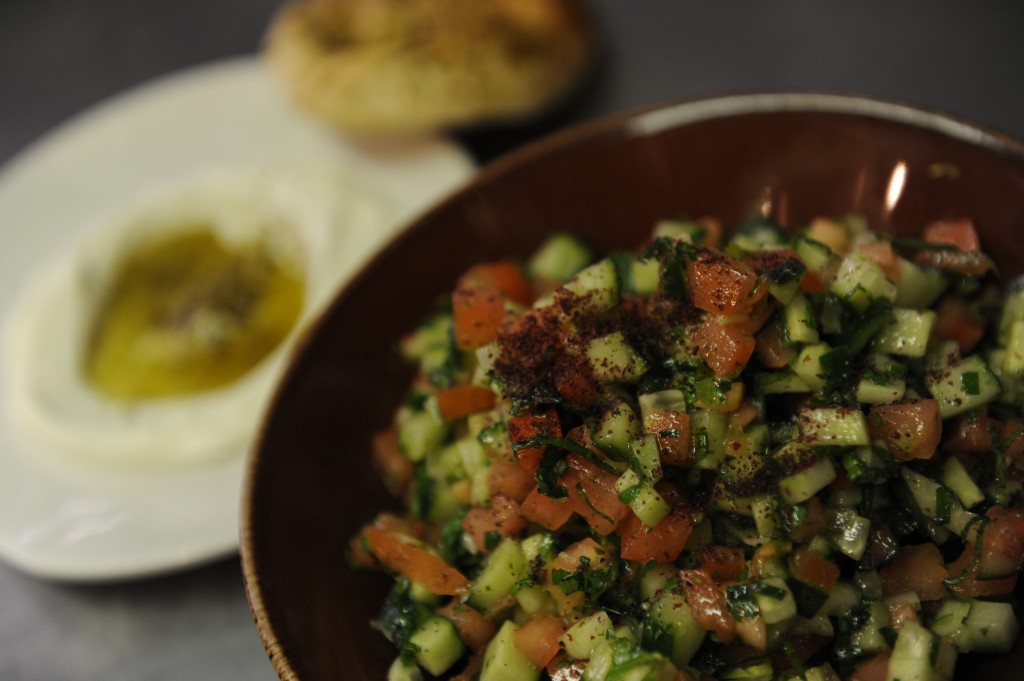 Dining at Balaboosta with an Expert

Last week, I received an invitation from Naama Shefi, Israeli food specialist and past Director of Public Programs and Events at the Consulate General of Israel in NYC. She asked me to join her at Balaboosta in Nolita, NYC, for lunch with a dozen strangers who had signed up to eat with her and learn more about Israeli cuisine.

Through a program called I Want More Food, founded by Jeff Orlick,  these food adventure seekers were scheduled to meet and eat with Shefi as their insider guide.

Here’s the concept: an “ambassador”, meaning a native of a region or country, contacts Orlick, stating that they would like to “host” a meal at a restaurant specializing in the cuisine of their home-land.

That person chooses a restaurant she thinks does a great job cooking her country’s food.  She sets the menu and decides how many guests may attend.  Attendees pay the fixed price, which includes the ambassador’s meal.  “Guests” gain access to the “ambassador’s”  knowledge, comments, and whatever else she shares during the meal. Once an “ambassador” volunteers to “host” and sets the details, Orlick sends out an e-mail inviting friends or anyone who has signed up to receive his notices.

This is not a class, not an academic exploration, simply a cool and casual way to meet others and experiment by eating cuisines you may not know anything about.

I asked Orlick if he has considered highlighting veg or kosher cuisines and his response was that decisions like that would be made by the “ambassadors” who might step forward to host.

In other words, he facilities, rather than directs.

This (relatively) spontaneous concept is about exposure to other cuisines and adventures in eating.  Ambassadors break down the barriers and hesitation to eat in foreign restaurants by setting the menu choices. The list of cuisines explored through the ambassadors program include Nepalese, Burmese, Bangladeshi, Egyptian, Sri Lankan, French, Filipino, and Indian.

With access to the menu and knowing that vegetarian options would be provided, I was curious to see who would attend and jumped at the opportunity to join in the adventure. 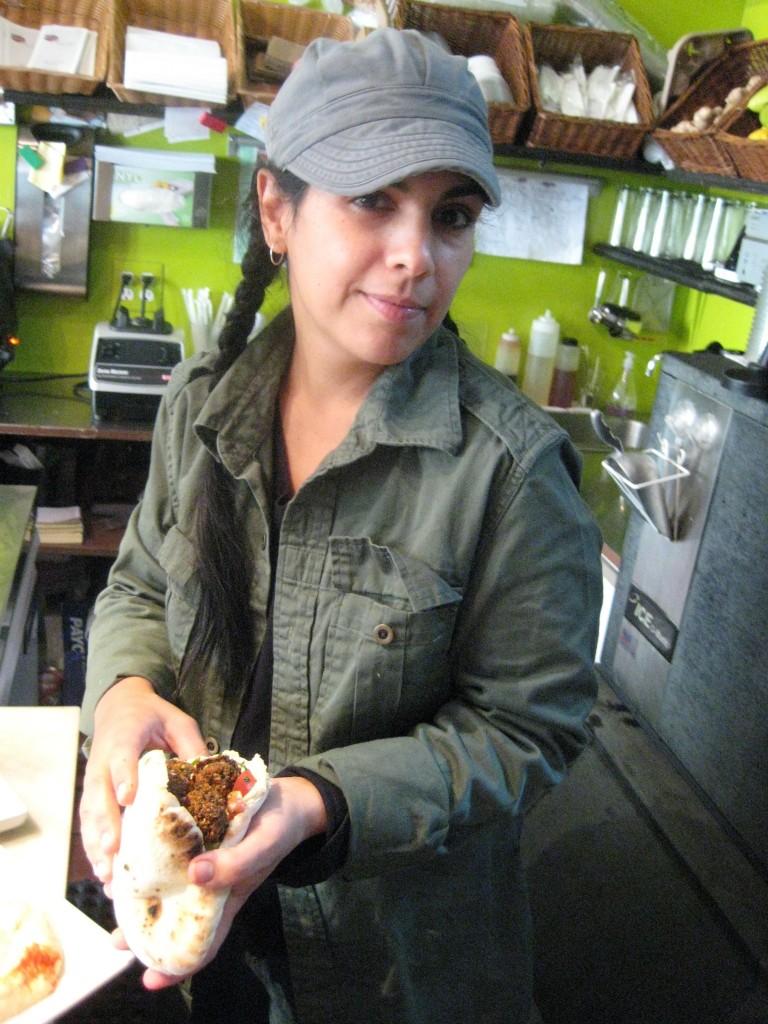 Some attendees were confirmed Israeli food enthusiasts while others were newcomers to the big flavors at Einat Admony’s Moroccan influenced, Balaboosta.

Most attendees were under 30 but there were a couple of out of towners and parents in their 50’s who knew the inside scoop and joined in.

Fifteen strangers gathered at a long table and enjoyed the meal while listening to Shefi share her knowledge  and enthusiasm for Israeli cuisine .
As a food writer for the Daily Beast and the Forward, she is articulate and passionate in a soft spoken and confident way. She grew up eating in the communal dining room of her kibbutz in Israel and moved to Tel Aviv, where she explored the diverse restaurant scene, before moving to NYC. 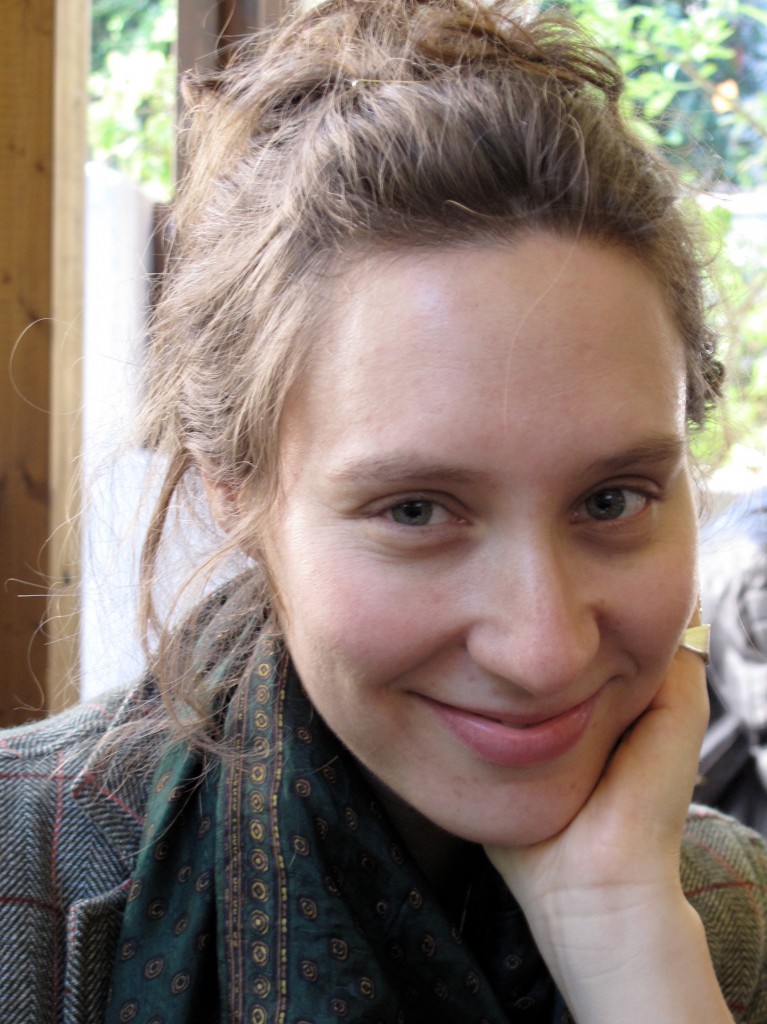 She is currently working on a project to preserve multiple Jewish culinary traditions and to promote new Israeli cuisine. I admire Shefi’s mission.

Israel’s restaurant scene is creative and international, with chefs taking advantage of farm fresh produce and dairy while incorporating influences from their travels to Europe and other cuisines of the Middle East. I am a huge fan of Israeli cuisine and have been lucky to eat in many outstanding and highly inventive restaurants in Israel, often guided by friends who live there.

At Balaboosta, the fixed menu was perfect for vegetarians or anyone who is Kosher Like Me. With the exception of one meat dish, everything else was veg, as is a good portion of the regular menu. 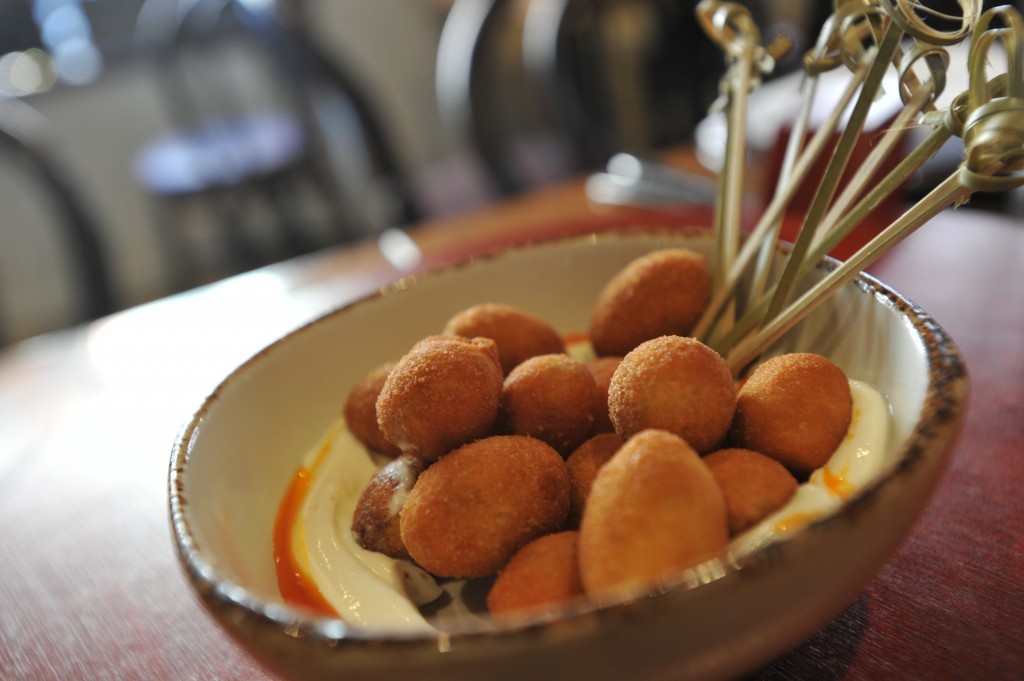 We began with Fried Olives with organic labne and harissa oil.  Labne is a dense, Middle Eastern yogurt that serves as a slightly tangy vehicle for dips and distinctive seasonings. The  fried olives were meaty and a novel beginning, sitting prettily in the snow white pile of labne, accented with hot, orange oil. 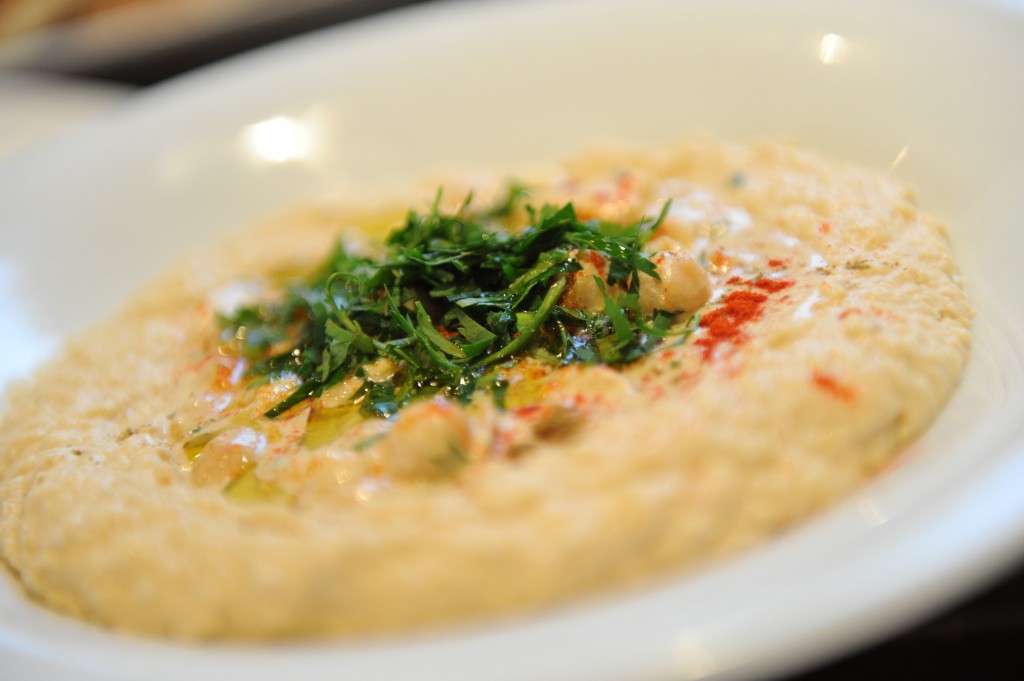 A Mediterranean sampler of hummus, babaganoush, roasted red pepper salad and pita seasoned with za’atar was the perfect choice for newcomers to Israeli food. These salads are staples on the table in Israeli restaurants and they are easy to love.  Balaboosta gets the creamy, thick richness of the hummus and baba just right.

Hummus was served piled high in a mortar. A pestle was provided for the final smash to the ground chick pea dip. Glistening, pungent cloves of roasted garlic sat jewel -like atop it all. 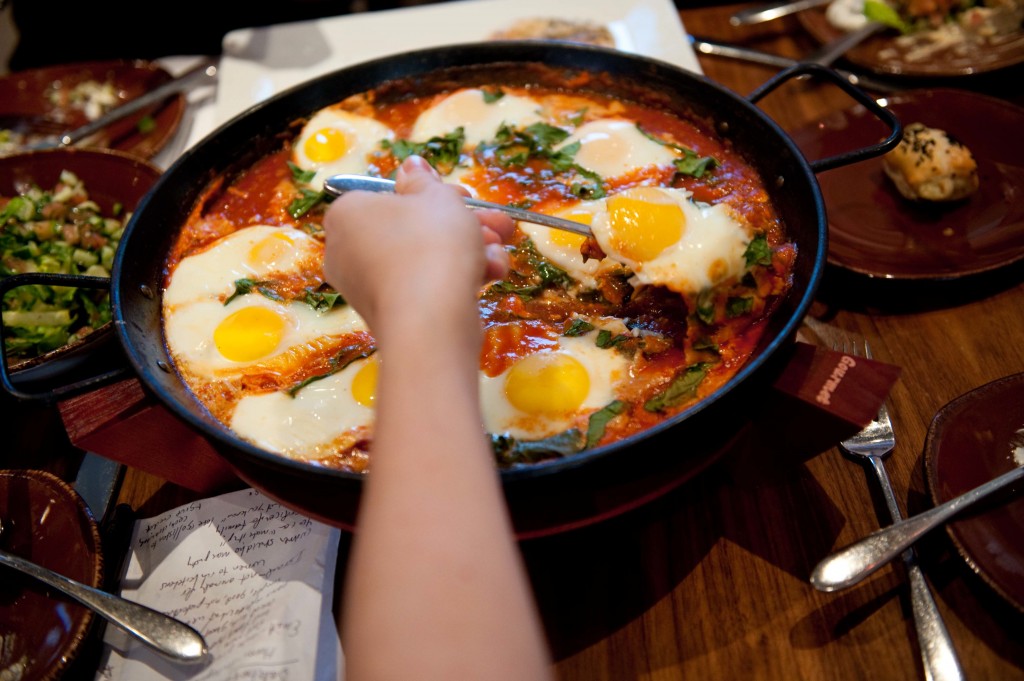 Shakshuka has as many variations as hummus but Admony sticks with the classic here.  This Moroccan dish of baked eggs in an individual casserole is overflowing with spicy tomato sauce and spinach. It is satisfying and delicious. Grilled country bread was served alongside so no sauce will be left behind.

A crunchy cabbage salad with chopped Romaine, Savoy cabbage, roasted almonds and crispy noodles was served as my veg replacement for the meat dish on the fixed menu. Cumin and minted vinaigrette seasoned the crunchy salad which was redolent of the Middle East.

More food still… typical of Israeli meals of many dishes, came in the lovely Moroccan Fish Cazuela, another saucy, tomato based dish with the added texture of sauteed chickpeas with preserved lemon and spicy paprika adding depth and interest.

Knafeh was the chosen dessert and what a great finish it was! 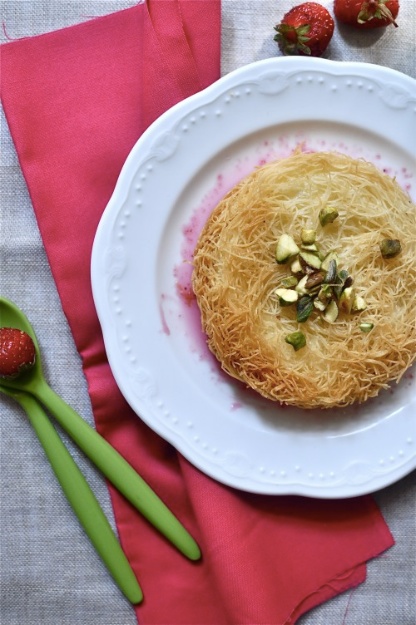 The chef shreds filo dough, called Kaaif, and soaks it in a simple syrup before layering it with ricotta cheese. This classic Arabic recipe is often made with goat or sheep’s cheese in the Middle East but utilized fresh ricotta in its place, here.

Each bite is a joy with warm, oozing, moist, sweetness providing the perfect traditional finish.

I have eaten at Balaboosta ( Yiddush term roughly meaning “perfect cook, wife, entertainer”) many times since it opened a couple of years ago, and have never been disappointed. And while Naama Shefi selected quintessentially Israeli dishes to share with those joining this cool food gathering ,  I seek Admony’s more inventive dishes, like melon soups in the summer and any interesting salad she dreams up as the season presents new ingredients.

Look for a second location of her famous TAIM restaurant (West Village) when she opens it right next door to Balaboosta on Mulberry Street in May.

Taim means delicious in Hebrew and you can count on that with Admony at the stove.