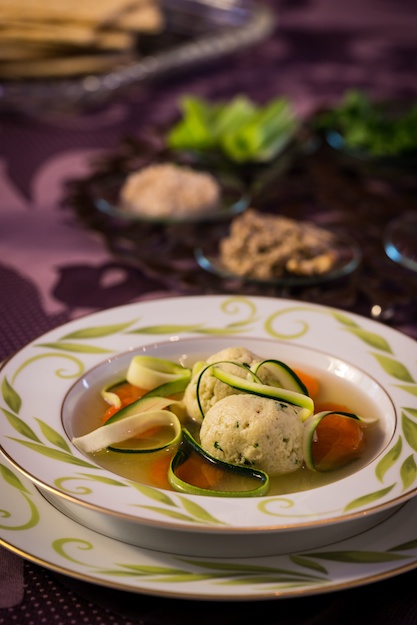 The New Passover Menu by Paula Shoyer enticed me from the first moment I flipped through it’s fifty plus recipes. And for fans of Shoyer’s previous baking cookbooks,  you’ll be thrilled to find 16 mostly gluten-free, kosher for Passover desserts.

Paula’s straight forward approach and sense of humor infuse these pages with easy to follow and mostly health conscious recipes. She begins with an overview called “Freedom from Passover Food Oppression”, reminding home cooks about how stringent Passover food restrictions can be. And then she offers solutions.

Shoyer breaks it all down with simple instructions on preparing for the holiday, planing your Seder table and arranging your Seder plate.

Once the foundations and rules are set (great reminders even for experienced celebrants and useful for newcomers) she launches eight menus, each with 4-6 dishes, including longer sections for an “Updated Ashkenazic Seder Menu” and an “International Seder Menu“. These eight menus are supplemented with a Breakfast section (gluten- free waffles and pancakes? yes, please) and a decadent dessert section, the area that Shoyer is best known for.

Starting at the beginning, I jumped into her chapter on new ideas for the Ashkenazic menu to see what she would illuminate as NEW.

I found it in her recipe for  Chicken Soup with Chicken Meatballs and Zucchini Spaghetti (scroll down for recipe).

Her soup is a traditional and basic chicken soup, much like mine. The twist is in the lovely rendition of protein rich chicken dumplings floating in broth. For those who don’t want the calories of matzah balls, this is a great solution. And for those who love ’em, she confesses freely to using the packaged mix (ok, I do too) and shares ideas on how to fancy them up with additions like chopped cilantro, parsley or ginger.

What’s really new here is a reliance on fresh ingredients and much less filler like matzah meal and other starches. Take her Asparagus, Zucchini and Leek Kugel (seasonal!) which only includes a 1/4 cup of matzah meal and is sans potatoes. Here’s a great way to lighten up, include a load of spring greens and honor culinary traditions. For those of you who  can’t imagine a kugel-less Seder, this one’s for you.

The International Seder Menu includes eight recipes influenced by the flavors of Turkey, Morocco, France and the U.S. You’ll find the requisite Middle Eastern Charoset, chunky with textures of chopped dates and figs and seasoned with nutmeg and ginger. Consider serving an array of different Charoset renditions at your Seder and get the conversation going about where they originated and why certain ingredients were used in different countries. 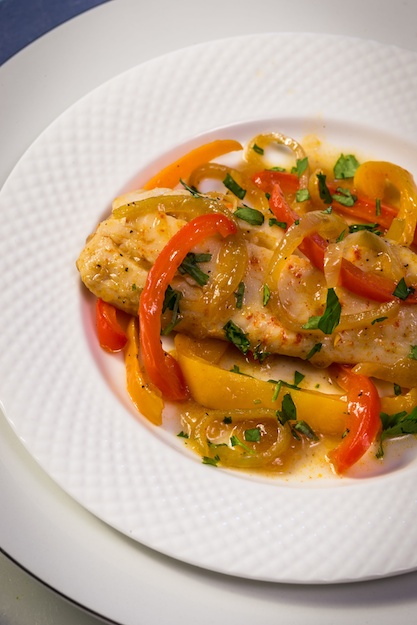 I love the Sephardic Poached Fish in Pepper Sauce loaded with garlic, onions, fresh cilantro and plenty of chili powder. Shoyer suggests serving it as a main course for lunch. I see it as a lighter and spicier alternative to heavier meats or braised chicken for a weeknight dinner.

The chapters called Italian Vegetarian Menu and BBQ Dinner Menu feel particularly fresh, with the former including a touching tribute to Shoyer’s father, Reubin Marcus, when he was stationed in Northern Italy during WWII. She lovingly tells the story of how he and his army buddies organized two Seders with plenty of moxie and out-of-the-box creativity and planning, while stationed there.

With that, Shoyer includes four straightforward Italian dishes including a handy and easy Gnocchi with tomato and light cream sauce and this do-ahead crowd pleaser, Eggplant Parmesan. 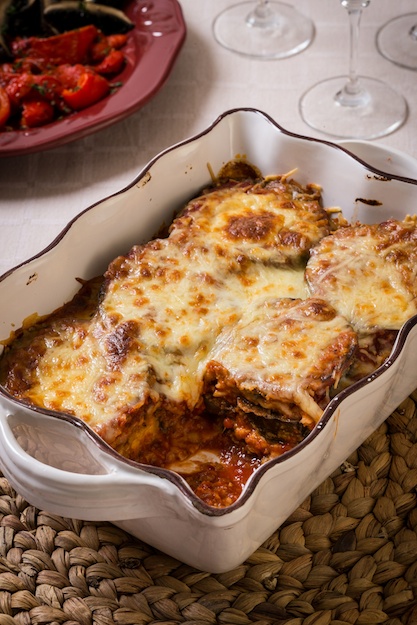 The BBQ Diner Menu reminds us that Passover is a celebration of the emerging spring season. Shoyer reminds us to fire up the BBQ if weather permits. Basic recipes for Garlic Marinated Steak with Onion Jam and Roasted Eggplant with Bell Pepper Vinaigrette will have me reaching for this volume long after the holiday ends. 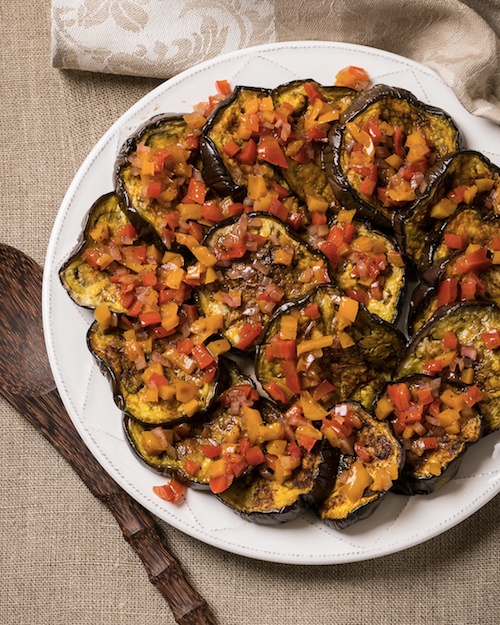 Shoyer is a renowned kosher baker so her fans will turn to the final section of this cookbook  with much anticipation. They will be pleased. 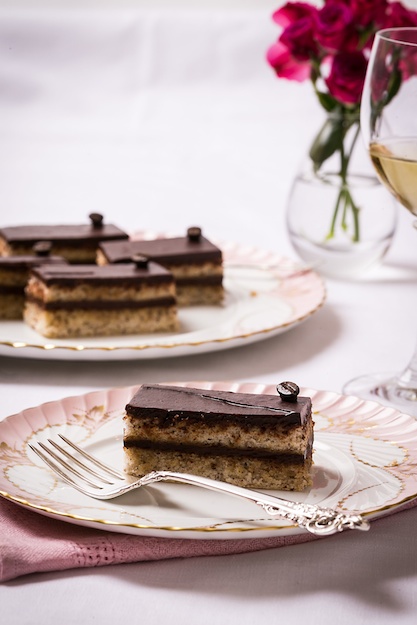 She includes 15 new desserts, many of which are gluten-free. Like her prior baking books, she presents a broad range of baked goods here including Fully Loaded Cookie Bars (jammed with pistachios, pecans, shredded coconut, ground almonds,chocolate chips, raisins and dried cranberries- whew!), easy-to-make Triple Chocolate Biscotti and this elegant  hazelnut, coffee infused Opera Cake, filled and topped with chocolate ganache.

The New Passover Menu would make a great holiday gift or a handy all-in-one Passover addition to your own library.  We’re giving one copy away so be sure to click back in tomorrow to enter. It will be easy, promise!

To read more about why we love Paula’s The Kosher Baker click here.

!To make the soup
PLACE the chicken pieces in a large pot. Add the onions, carrots, leek, celery, garlic, parsnips, fennel, turnip, bay leaves, and salt.
Add the water and bring to a boil.
Use a large spoon to skim the scum off the top of the soup. Cover the pot, reduce the heat to low, and let the soup simmer, checking after 5 minutes and skimming off any additional scum.
Add the parsley and dill, cover, and simmer for 2 hours. Let cool.
Strain through a large sieve, reserving the carrots to return to the soup when serving.
Taste the soup and add more salt or pepper if necessary.
!To make the meatballs
WHILE the soup is cooking, prepare the meatball mixture.
In the bowl of a food processor with the metal blade attachment, mix together the chicken, stock, ground almonds, garlic, and egg until a paste forms.
Add the scallions, salt, and pepper and pulse a few times to mix.
Transfer the meatball mixture to a medium bowl, cover with plastic wrap, and chill for up to 1 day, until ready to shape and cook the meatballs.
USE a spoon to scoop up the meatball batter and wet hands to shape it into 1 1/2-inch (4-cm) balls. Bring the strained soup to a simmer, add the meatballs, cover, and cook for 8 minutes.
!To make the garnish
MEANWHILE, prepare the zucchini “spaghetti” for the garnish.
Slice the zucchini lengthwise into 1/4-inch-thick (6-mm) slices.
Keeping the stack together, use a vegetable peeler to shave the zucchini into long strips.
Slice the reserved cooked carrots into rounds and return them to the soup.
Top each serving of soup and meatballs with some of the zucchini spaghetti.