Quick! Name three quintessentially Jewish foods.  Don’t think too much about it.

I bet that kugel is on your short list.

Even the most health conscious cooks will likely whip up a luscious, highly caloric noodle pudding at some point in the next month as Jews everywhere, celebrate four holidays over five short weeks.  This rapid-fire succession of holidays requires lots of planning and some easy recipes that are guaranteed to please a crowd.

Kugel is a versatile and variable concept. Depending on the region your family hails from, or the place you currently live, your kugel may be creamy and cheese laden, savory with  fresh herbs and veggies, or stacked with potato and onion layers simply seasoned with salt and pepper. Add thinly sliced firm apples or slightly under ripe pears from the orchard?

I make the full throttle dairy version that I grew up loving. No compromises when I make this one. Full fat cottage cheese, sour cream, butter all the way. There are few things that filled my home with such sweet aromas as a rectangular pyrex pan filled to overflowing with creamy, cheese laden custard. The lightly browned surface rippled with crunchy noodles that masked the moist decadence hidden beneath it.

When E. left for university, I froze my dairy kugel in single portion squares and slipped them into jumbo ziplock bags for her to stow in her dorm room’s sliver of a freezer compartment.  It came in handy, I am told, after late night parties or ahem, study sessions that left her famished.

Last year she graduated to trying to make it herself. E. is quite the accomplished and creative cook, so I was surprised when she called me with disappointment in her voice. “Mom, my kugel doesn’t taste like yours. It  just doesn’t taste like home.”

That’s the thing about kugel. It is the simplest of dishes, easy to make and with plenty of room for creativity. But we gravitate to what we remember from our  own holiday or Sabbath meals cooked at home. 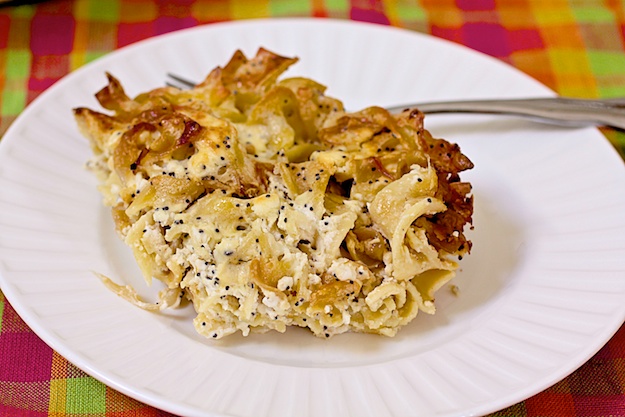 Whether your family’s kugel is the onion and potato variety, the very old Alsatian recipe using leftover bread and mixed with stewed dried fruit, or a veggie crammed spinach or sweet potato  kugel, my guess is that you have a favorite.

If you can make room in your heart for another one,  check out Melissa Roberts’ Caramelized Onion and Poppy Kugel.

It strikes me as a the perfect twist, combining savory elements with plenty of rich cheese and subtle crunch from the poppy seeds. She wandered off the path just enough  to make it interesting, but not so far that I would call it unfamiliar.

Let’s put it this way, the shoot took longer than expected cause I was nibbling my way through a generous square that Melissa carved out of the pan for me. Breakfast the next day?  If only I had some left overs….

Place it  on your buffet for post Yom Kippur break-fast and let me know how you and your guests like it.

Put rack in center of oven and preheat to 350F.
Cook noodles in a large pot of boiling salted water until al dente. Drain in a colander and rinse under cold water, then drain again.
Melt butter in a large (12”) skillet over moderate heat. Brush baking dish with some of the butter. Add onions and ½ tsp kosher salt to skillet and cook, stirring occasionally, until soft and well browned, 30 to 35 minutes. In a large bowl, toss together noodles with onions.
In the bowl of an electric mixer (or using a handheld mixer and a bowl), beat together sour cream, cottage cheese, cream cheese, eggs, and poppy seeds with 1 tsp kosher salt and 1/2 tsp freshly ground black pepper until combined well. Stir mixture into noodles.
Spoon into baking dish, cover with foil, and bake 30 minutes. Remove foil and continue to bake until kugel is set and top is golden brown in spots, about 30 minutes more. Let stand 5 minutes before serving.