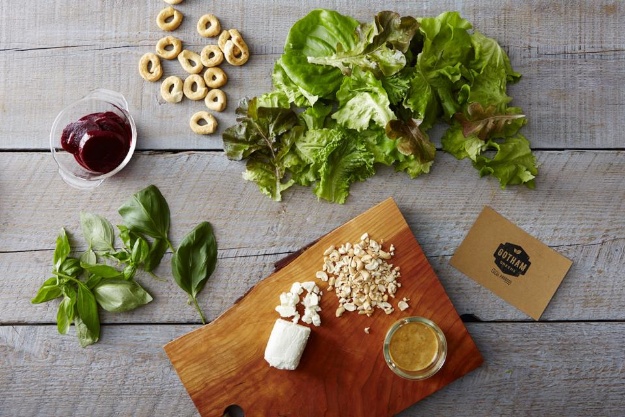 Where to Find Local Greens in Winter

Did you know that there are farmers growing herbs, greens and veggies even in the coldest winter months? Thanks to some expert input from NYC’s Gotham Greens, who “see green fields where others see rooftops”, we’ve got the inside dirt on dirt-less growing so we can help you find a wide variety of fresh and local greens straight through the winter months.

What’s the scoop with hydroponics?

With hydroponics, farmers use water and nutrient solutions (fertilizers) instead of soil as a growing base. While hydroponics can grow outdoors, urban farmers often chose to grow in greenhouses where the the environment can be completely controlled.

What are the advantages of hydroponics?

What’s more, since it hydroponics can be grown almost anywhere, a seemingly useless rooftop can enable folks to get locally produced, healthy and affordable food that can transform urban neighborhoods.

Since there is no traditional soil involved and most hydroponic vegetables are grown in controlled environments, they can also minimize the risk of soil-borne pests and diseases. Still, hydroponic farmers battle agricultural pests. While some producers do use chemical pesticides, there are plenty out there that opt for natural, pesticide-free hydroponic growing (we’ve rounded up a few for you below!).

Nicole Baum of Gotham Greens says they “have implemented an Integrated Pest Management (IPM) program that relies on organic methods and the use of beneficial insects like ladybugs so our products can be pesticide-free.”

The short answer is: sometimes.

Some traditional organic farming advocates raise an eyebrow about hydroponics since growing occurs in unconventional ways (in a manmade environment) and requires the use of refined mineral solutions rather than natural soil. But there are indeed organic hydroponic farmers out there. What it comes down to is the type of nutrient solution used to grow the crops.

Is this a new thing?

While the emerging practice of urban agriculture is considered vanguard, hydroponics actually dates back to ancient times. It is just a “different” kind of farming that most people are not familiar with today.

But we do think that this form of unconventional yet sustainable agriculture will play a huge role in the way people source and eat food in the future, and the farmers of Gotham Greens clearly agree: “The increasing scarcity of natural resources underscores the importance of efficiency in agriculture and food production. Population growth, urbanization and climate change are all factors that will strain the global food system over the next half-century, and place significant additional pressure on the environment. As a response to these concerns, scientists, agronomists, policy makers and entrepreneurs are urging a switch to more sustainable forms of agriculture. We believe that urban agriculture has a role to play within the sustainable agriculture sector. If well practiced, this form of farming can be extremely productive and efficient.”

Fun fact: Egyptian Pharaohs practiced this dirt-less method of growing centuries ago. In fact, historians believe that the Hanging Gardens of Babylon, one of the Seven Wonders of the World, was a form of a hydroponic garden!

What kinds of greens are growing now?

Since many greenhouses are climate controlled, local companies can grow a variety of greens all year, just like Gotham Greens. “We focus on leafy greens and culinary herbs as these are highly perishable and at this time of year, they usually travel the farthest before reaching our plates,” commented Baum. “Since we’re growing our products in the city, we can harvest in the morning and literally sell it to consumers hours later.”

Oh, how we love that!

You can get fresh bok choy, arugula, butterhead lettuce, and the only locally grown basil you’ll find around New York at this time of year from Gotham Greens. See where to buy and a full list of their products here.

Don’t just take our word for it, we found a like-minded eater who buys her greens in NYC on a weekly basis from Gotham: “The greens are crisp and last in my fridge. The flavor is real – it doesn’t just taste like water. And, I love the idea of eating locally – something that’s tricky to do in New York City.”

Spotlight on Gotham Greens: They are the country’s first commercial rooftop greenhouse operation that sees potential for healthy bounty where others merely see empty concrete roofs. Started in 2009 in Brooklyn, Gotham Greens recently opened its second greenhouse atop Brooklyn’s Whole Foods Market – the first time a commercial scale greenhouse has been directly integrated into a supermarket.

Despite already producing over 300 tons of greens and herbs each year, they ‘re spreading their operations to other urban centers.  They just announced plans to create the nation’s largest rooftop farm in the windy city of Chicago this year where they will be pumping out nearly 1 million pounds of greens annually. And they will likely continue to expand, so be on the look out for them in a city near you in the future.

Where to buy: Plenty of NYC and NJ retailers, as well as well-known restaurants like Gramercy Tavern.

Be sure to check out these sources, too:

Bright Farms, Inc.: Yet another NYC-based hydroponic farmer that started in 2011, Bright Farms, Inc. builds and manages urban greenhouses across the country so that no matter whether you are from Missouri, Pennsylvania, Oklahoma or NYC, you can eat local greens this winter.

Boot Camp Farms: Bridgeport, CT based Boot Camp Farms aims to transform common brownfields of American places, just like Bridgeport, into sustainable agricultural havens. In turn, they will create jobs for veterans, stimulate the local economy, and provide locavores like us with healthy, affordable food, year round. Watch for more on Boot Camp Farms in a future post.

Now that you know where to find fresh local greens in winter, what will you be preparing with them?

Want to know about another far-flung spot where hydroponics is providing fresh greens and veggies to folks who live on an island where farming is impossible due to the poor soil?

Check out Liz’s post on Canouan Island in the Grenadines, where she ran into a hydroponic farm when she hit a wayward tee shot. She may not have kept her head down but her eyes were wide open.