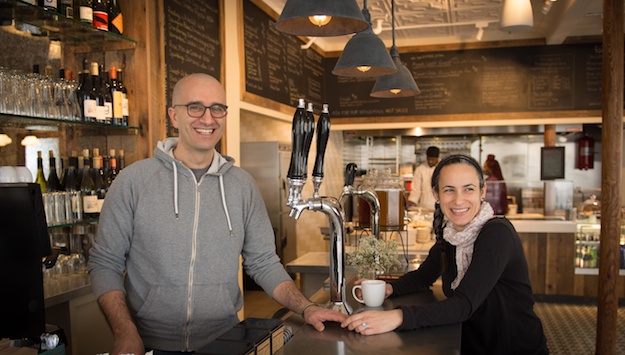 Owners, Berj and Tania; photo courtesy of Rosemary and Vine

Each dish at this casual restaurant is built on veggies, legumes, grains and spices; yet as homespun as that might seem, each one is distinctive with fresh, seasonal ingredients that are transformed into a multi-dimensional Pan-Mediterranean palette of flavors.

Nowhere near this restaurant? No worries. Rosemary and Vine shared recipes with us. Scroll down to see them.

That’s why they infused the menu with ingredients like tahini, zaatar, labneh, fava beans, pomegranate molasses, sumac, lemon juice and garlic, and even incorporated their own cherished family recipes – talk about authentic cooking!

The menu was designed by Erica Wides, prominent chef, “whole-foods” expert and host of Let’s Get Real: The Cooking Show About Finding, Preparing and Eating Food. She who merged Tania and Berj’s Middle Eastern culinary heritage with highlights throughout the region. The result: an all-appealing all-vegetarian experience that will leave you feeling all-good.

You can choose from plenty of seating options in the cream and barn wood colored cozy space. Intimate two tops contrast with the inviting communal table made of reclaimed boat wood. Or pull a stool up to the antique mirror-backed bar. Chalkboards lists the week’s certified organics. A hand-etched map of New England marks the menu’s local sources, including Whitecliff Vineyard, Sixpoint Brewery, 5 Spoke Creamery and Old Chatham Sheeperding Creamery.

My first taste of the fare was chilled Gazpacho Blanco, an ideal warm weather soup. It was a curious combination of pureed cucumber and sweet grapes, laced with subtle hints of garlic. Slivered almonds, fresh mint and a drizzle of labneh (a Middle Eastern yogurty-cheese) added depth to the velvety puree.

Find the recipe, below.

The Avocado Crostini, paired with the pungent charmoula (think Moroccan-style pesto), fresh green peas and feta crumbles on a bed of crusty bread, made for a flavorful bite. The crostini paired with the smooth gazpacho would make a perfect healthy lunch or light dinner.

Spoiler alert: recipes for both below!

The Family Recipe Babaganoush was a tasty mash of fire-roasted eggplant blended with rich tahini, garlic and lemon. Later I learned from Berj that the method of roasting eggplant over a flame “gives it a lovely smokiness that is reminiscent of the Lebanese version.”

The house-made Hummus, also a family recipe, was creamy and delicious. True to Lebanese style, it is heavier on the chickpeas and lighter on tahini. The sweet, juicy burst of the pomegranate seed garnish served as a reminder of a cherished ancient food rooted in symbolic tradition.

The flatbreads are ideal as shareable apps or great for a light meal. The “Yasmine”, with its Middle Eastern essences of smooth hummus, crunchy fatoush greens and lemon-herby sumac dressing, was full of bright flavors. It was my pick of the three versions on offer.

Between each course I enjoyed intermezzo chats with Berj, Tania and Erica, each of whom radiated pride for this authentic, native food so familiar to them. In the spirit of seasonality, the team will change the menu based on what’s local. Of course, the authentic Mediterranean dishes will remain constant. With fall around the corner, they’re expecting to add lots more hearty beans and root veggies.

As the entrée came around, I couldn’t help but think that hungry omnivores hankering for a filling meal would have no problem here. They’d choose from inventive takes on Italian classics, like 5 Cheese Mushroom Lasagne with porcini mushrooms and a tarragon infused French béchamel sauce or Truffled Summer Garden Fettuccini, laden with a rainbow of garden fresh vegetables and truffle butter; or maybe a meatless version of the classic Lebanese Kibbeh, a savory pie of potatoes, cilantro and bulgur with sautéed turmeric onions and greens.

I eyed the Family Recipe Falafel as well as the Saffron-Scented Moroccan Tagine . The tagine, a beautiful medley of textures and spices composed of butternut squash, chickpeas and zucchini over a sprawl of fluffy couscous and spiked with a tangy blended charmoula sauce (think Moroccan pesto – recipe below!) was hearty and flavorful.

The Falafel, made with earthy fava beans as well as chickpeas, came with Lebanese pita (distinctly thin and simple), tahini, hummus, and  bright pickled turnips. The combination of crisp turnips, creamy dips, fluffy falafel and crisp flatbread was a divine textural fusion.

Vegan, dairy-free desserts were the perfect encore. I tasted the decadent coconut milk-based Dark Chocolate Pudding as well as the Almond-Arborio Pudding loaded with bourbon vanilla beans and almond milk. Both were creamy, rich and deceivingly dairy-free. Next time, I’m saving room for the Lemon Rosemary Cake.

If your mouth is watering but you’re too far away to stop by, don’t sweat it. Scroll down for a selection of recipes, generously shared with us, by Tania and Berj.

This chilled soup is a velvety blend of the simplest summer ingredients, brought together to equal more than the sum of its parts. A wonderful contrast of sweet grapes and tangy vinegar lends mystery while the toasted almonds give the soup just enough body.

Cut the cucumber into large chunks, then place in a blender along with the grapes, almonds, garlic, sherry vinegar and salt.
Process until the mixture is broken down and coarsely chopped.
With the blender running, drizzle in the olive oil until combined and smooth, but don’t let the machine run once the soup is pureed. Taste the soup and adjust salt and vinegar as needed.
Chill the soup before serving, garnish with almond slices and sliced chives if desired.