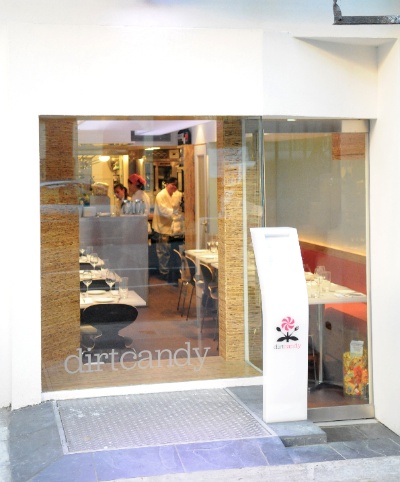 No larger than a modest walk-in closet, this unassuming storefront in the East Village, NYC, is lined not with clothing racks but compact tables, hungry customers flanking all available sides. You don’t eat at Dirt Candy for the ambiance, but if you’re lucky enough to get a reservation in the first place, it’s hardly a distraction once the game of human Tetris has been played and all are snugly seated.

An open view of the matchbox kitchen provides a unique sort of dinner theater, a glimpse behind the scenes, but also transfers a frenetic, chaotic energy to the whole meal. As the action spills out into the main floor, service does suffer; plates are hastily deposited without announcement or expansion, and questions are brushed off with unsatisfying half-answers. But ah well, these are reasonable compromises to be made in a chef-driven restaurant, provided that the food itself is capable of making up to these perceived slights.

And it does, for the most part, outshine the otherwise less than ideal conditions. An ambitious menu set on exploring new flavors and textures of vegetables, the entire list of dishes can be ordered in vegan format if they aren’t already free of animal products. Short and sweet, it reads like an excitable gardening catalog. Endearingly enthusiastic, that energy is contagious, making the anticipation for each coming course ever greater.

Cucumber! was my first pick of the evening, a hot and sour roasted cucumber soup poured table side over shredded wood ear mushrooms and crispy fried rice sticks. For a clear liquid, that steaming broth was stunningly rich, enhanced with the toasted, nutty flavor of sesame oil. Fiery spices build quickly and linger through each subsequent slurp, unfortunately overshadowing the more delicate namesake vegetable. Though warm cucumbers don’t sound the least bit appealing on paper, somehow this curious combination really worked. The round sheets of cucumber gel were the stars of this show, combining both a fresh cucumber flavor with a soft, jelly-like texture that seemed to melt delicately into the surrounding liquid. 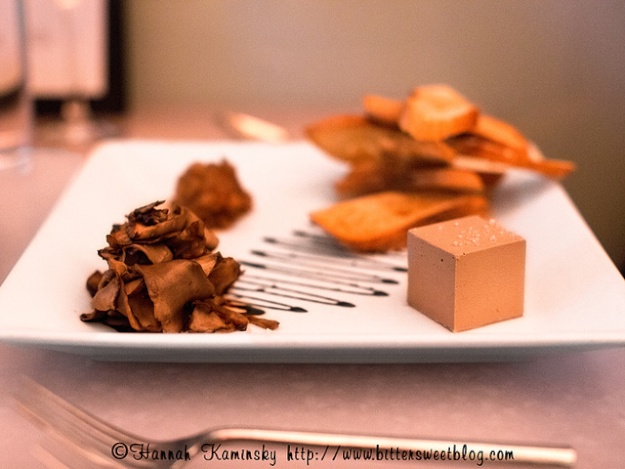 A perennial favorite, mushroom! is a must order for anyone unfamiliar with the Dirt Candy perspective. So deeply and intensely savory that you can smell the umami coming at you from three feet away, the aroma of pure mushroom will reach you before the plate even emerges from the pass.

Portobello mousse is the obvious star of the show, commanding your undivided attention with its impossibly dense, silky texture and deeply earthy, almost smoky flavor. Distilling the pure essence of portobello into this 1-inch cube must be some feat of alchemy, as it creates something that tastes more of the mushroom than any unadulterated fungus I’ve ever encountered. A seasonal fruit compote lends a stabilizing hit of sweetness to this umami powerhouse, the toast is a perfectly crisp vehicle for the decadent spread, but those secondary components can’t hope to rise beyond their supporting positions in the wake of that heavy-hitting mousse.

Though topped by a tempura-fried egg by default, corn! is happily veganized by request with tempura-fried watercress instead. While it doesn’t strike me as an equivalent swap, I can hardly argue with the results. Shatteringly crisp and delightfully salty, I could have happily gone to town on a plate of those battered greens for dinner. Moreover, their crunchy texture offset the luxurious pool of creamy polenta below. A buttery porridge of coarse cornmeal with the surprising twang of pickled shiitake peppered throughout, the whole dish screamed out “comfort food.”

The promise of the highly elusive huitlacoche was a big selling point for me, so it’s regrettable that I still walked away from that meal unable to say what they taste like. Meted out in tiny dots around the periphery of the plate, it was more about the idea of eating rare corn fungus than the actual act of eating it.

When I think of beans, piles of beige chickpeas and navy beans come to mind, so the appearance of beans! was a bit of an initial shock. Towering above the other dishes in one carefully balanced stack, the beans came in the form of soybeans (tofu,) sea beans, and wax beans.

Taste aside, you must know that this is the most flawless execution of tofu cookery I’ve come across to date; seared to an impossibly crunchy finish on both long sides of the white slab, it’s what every block of tofu dreams to become. The flavor is no slouch either, powered by a heavy-handed sprinkle of cayenne across the top, at times overwhelming the senses with heat. Such a blatant lack of finesse is startling at this level, preventing such a promising entree from becoming a clear winner.

What really stands out in my mind were the unexpected inclusion of “savory oreos” hidden alongside the main stack. The “cookies” consisted of crispy black rice, and the filling was nothing more than yellow wax bean puree. Playful and creative, those two small bites really exemplified the mission statement at Dirty Candy.

Hands down, the best part of the meal was saved for last. I was certain that the famed Sweet Pea and Mint Nanaimo Bar wouldn’t translate into a dairy-free rendition, but it was my lucky day. Although comfortably full at this point in the meal, I’m so glad I made room for dessert, because the mint ice cream was just the light, refreshing finish to cap off a fairly decadent round of savories. Regrettably, the pea flavor was no where to be found, but that disappointment was short-lived. With such bright, herbaceous mint at the helm, who could complain? If only there were enough seats to squeeze in for a quick late night snack, I’d be sorely tempted to drop in for just another layered bar of ice cream delight.

Leaving the restaurant with mixed feelings but an undeniably satisfied stomach, it’s clear that the dining experience at Dirt Candy can’t be compared to any other in all fairness. A truly cerebral affair meant to inspire, challenge, and perhaps even provoke the diner at times, the food isn’t just the end product of the chef’s efforts; it’s the beginning of a whole new conversation about vegetables.