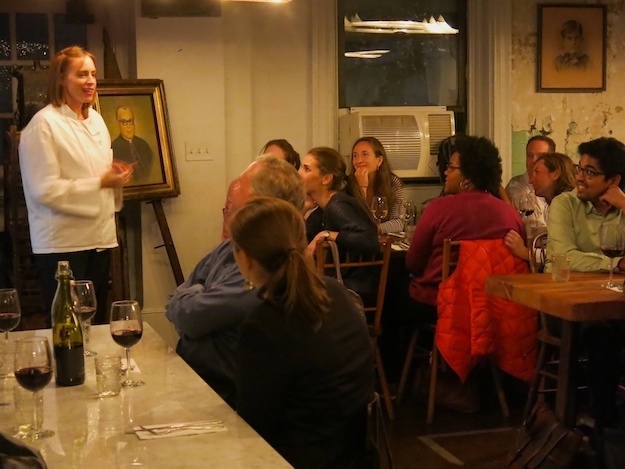 City Grit is not a restaurant and not an underground supper club. So, what is it? And how do you find out what’s cooking? And most importantly, how do you join the party?

City Grit is the brainchild of Sarah Simmons, a North Carolina native, recently named one of America’s Greatest New Cooks by Food and Wine Magazine. She launched City Grit in 2011, in the heart of NoLita, NYC, as a culinary salon that brings both well known and lesser known chefs to the basement kitchen of an old brick schoolhouse to  strut their stuff. Guests dine at tables on the first floor of the schoolhouse which serves as a showroom for handcrafted furniture by day and morphs into informal dining areas by night. 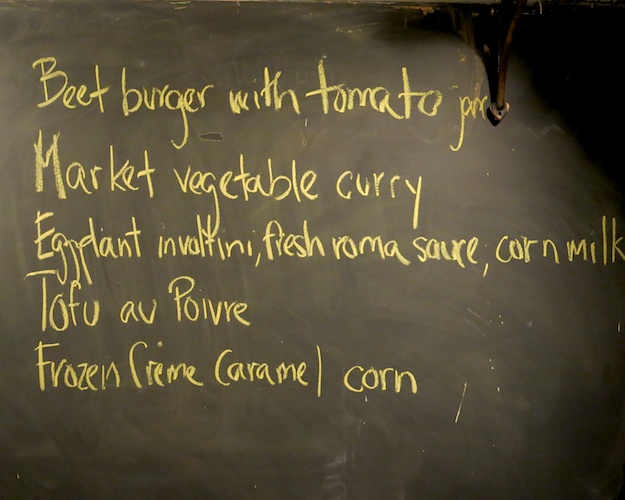 Each time I’ve eaten at City Grit, I jumped on tickets for Veggie Tales, the all vegetarian feasts created by Sarah Simmons, herself. She also hosts Southern style Shabbat dinners, for which she ensures that the meat is kosher and there is no mixing of meat and dairy. City Grit’s website gives all the details for each offering and diners sign up and pay in advance.

There are 2 rooms and depending on the crowd and circumstances, you may find yourselves chatting with new friends at a long communal table or dining intimately at a candlelit high top with your own crew. The seating is old school (literally) and of various heights and comfort levels, the bathroom is up a double flight of steps and the stalls likely have broken tiles. Be prepared for your meal to take three hours give or take a few.

Flexibility is key here, so settle in for the experience and relax. Because… 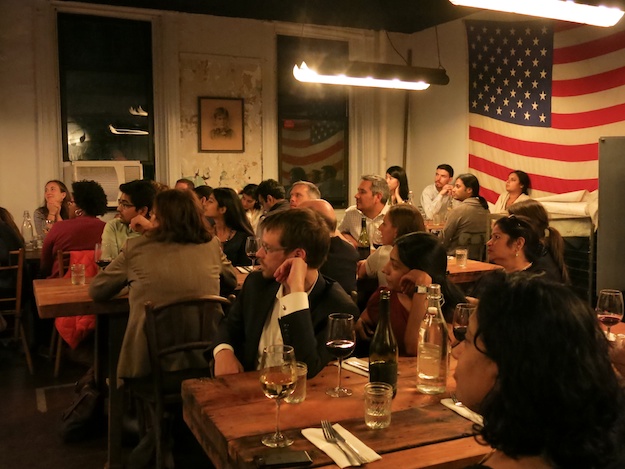 The one and only detail that really matters is that the food is highly creative and exceptional.

I loved the offbeat, unexpected, non-traditional dining environment.  I  know (now you do, too) to be open to a long eve of shmoozing and a lot of exclaiming over the delicious dishes being placed before me and other  adventurous and enthusiastic guests. 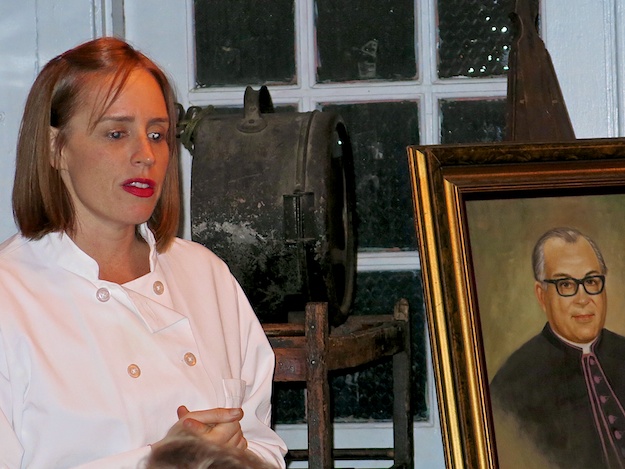 Simmons welcomes her guests and  introduces each meal, setting the friendly tone with juicy details about the ingredients, her inspiration, her favorite dishes. She is consummate host, sharing her love for all things corn, and her frustration over vegetarian stews and curries receiving less than perfect ingredients. 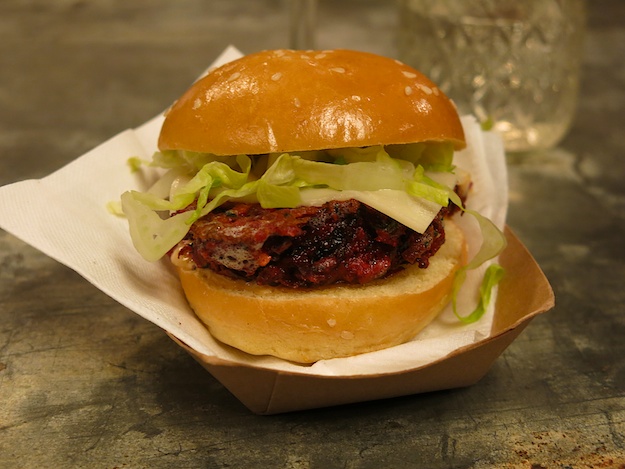 When she introduced her Beet Burger, she claimed that she would gladly do a throw-down with this one. Oh yes, we were well primed.

One of the guests at our table raised the Beet Burger to her nose and commanded us to STOP and inale.

OK. I’ll play.  We threw out impressions: earth, citrus notes, substantial without being heavy, well balanced. The glossy brioche bun was handmade by the talented baker we sat with a few months back. Tonite, she also baked the  buttermilk biscuit Roti (Indian flatbread) served with the Market Vegetable Curry.

You just never know who you’ll meet at City Grit. 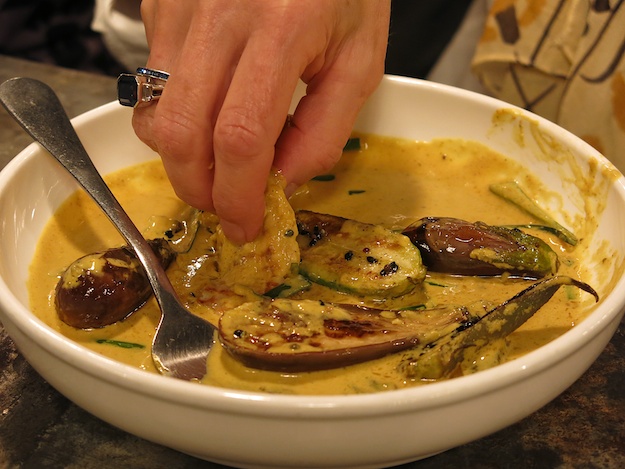 Simmons shops Union Square Market to source the freshest veggies and support local producers and growers.  The baby eggplant, tiny okra (no slime!), and sweet baby yellow squash starred in the bold yellow curry we lapped up with the spongy Roti. 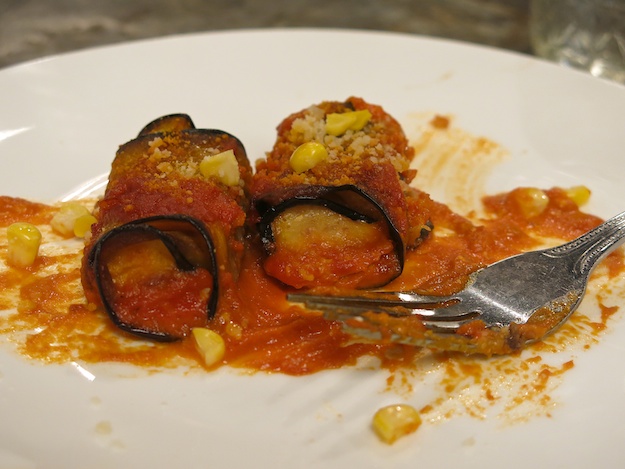 Next course was a delicate Eggplant Involtini, highlighting thinly sliced eggplant with late season, simmered Roma tomatoes resulting in a rustic, chunky sauce. House made ricotta provided the creamy filling and corn bread with corn kernels (constructed and deconstructed) dusted the surface. Simmons loves her corn and I’m loving the many unexpected ways she employs it in her cooking. 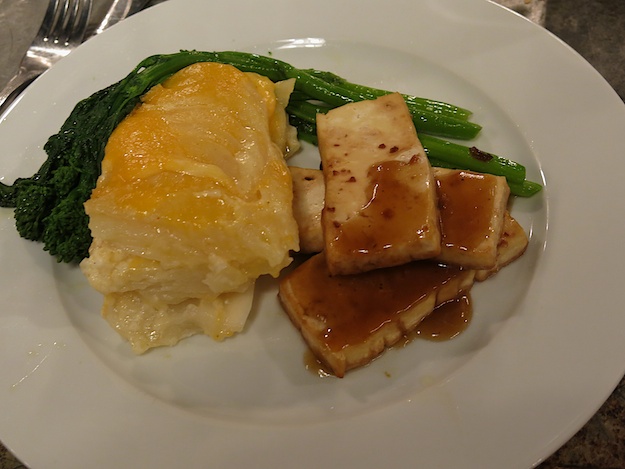 Hard to imagine eating more but onward we marched to enjoy Tofu au Poivre, a clever twist on a steak house staple.

Here, Simmons braised sheets of tofu in red wine, roasted them, and served them with a miso based mushroom gravy. Scalloped potatoes, thinly sliced and layered with rich cream, the old fashioned way, was a perfect nod to the old school steak side dish. 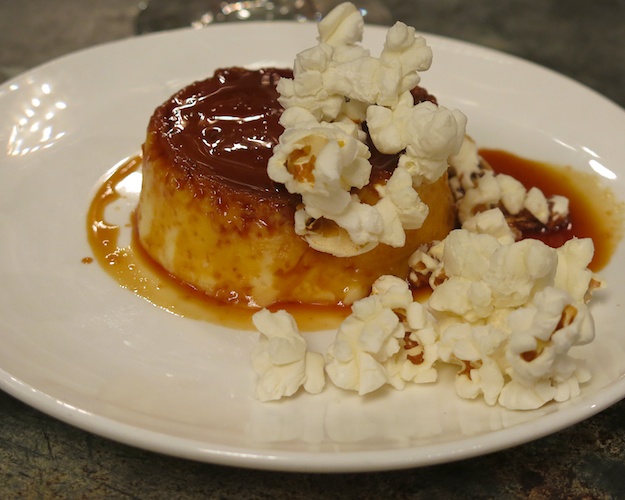 We finished with what may have been corn’s farewell nod to the season and if so, it left us with a memorable bang. A semi-freddo of corn custard, pureed in the vitamix and thickened and baked off, was set in a puddle of  glowing caramel . Popped corn lent some crunch and textural contrast. The seasons were bridged gracefully by the chilled dessert and the warming glow of caramel.

My plan is to catch Sarah’s next season of Veggie Tales. I would love to meet some readers there so let me know if you would like to join me. 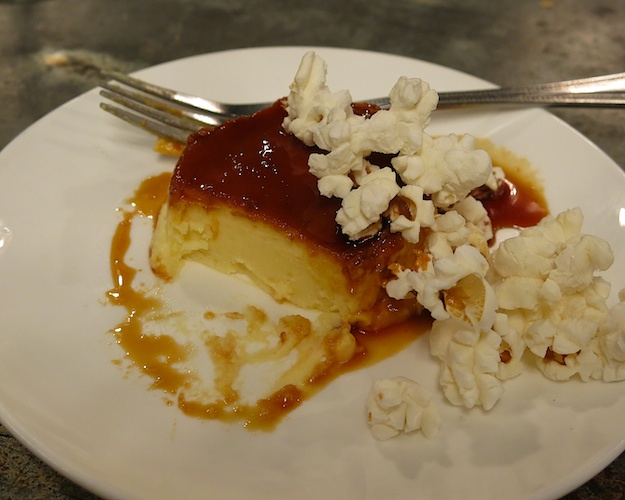 If anyone attends one of the Southern Shabbat Dinners I want to hear about it and see your pics.  The next one is scheduled for November 8. Click here to reserve your seats and for more info.

City Grit is located at 38 Prince St. (between Mott and Mulberry), NYC. Veggie Tales and Southern Shabbat dinners are a bargain at $55.00 pp. Beer and wine may be purchased at the dinners.

To learn more and to see the upcoming schedule of dinners and events click here.

Notes: City Grit dinners sell out quickly. Purchase tickets online and consider signing up for their e-blasts so you don’t miss out.

Only Southern Shabbat dinners use kosher meat and products. This is not a kosher restaurant. 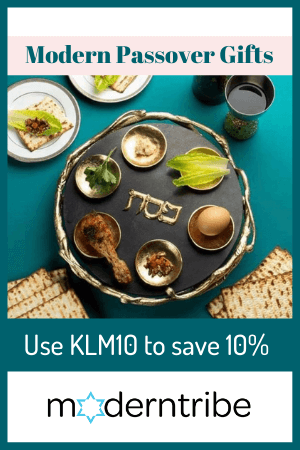