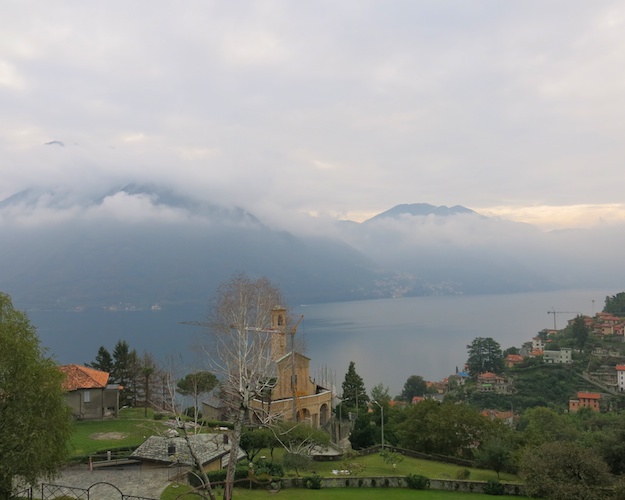 Indulging in Truffles, Creamy Pasta and Vino in Northern Italy

I had this image of myself romping through the Italian woods, slim jeans (always slimmer than the true pic)  tucked securely into knee high, waterproof boots, hugged by a warm sweater that I wouldn’t mind getting smeared with shmutz and the company of barking, highly trained dogs alerting our very own trifolau (truffle hunter) to the exact spot where these lumpy tubers would be pried free of the moist soil with an ecstatic yelp of ECCO!

I flew off to Northwestern Italy to hunt truffles and taste the magnificent, Nebbiolos, Barolos and more lovely reds than I can clearly recall.  David Lynch, renowned sommelier, author, restaurateur, was our deeply knowledgeable and well connected guide. And yes, I was there to explore the hearty cuisine of Lombardy, rich with many easy options for anyone kosher like me or vegetarian.

I was thrilled to learn that the foods in this mountainous region often included choices that were perfect for us.  Mackerel, anchovies and other white fish from these Northern lakes are plentiful along with regional specialties including stuffed vegetables, risotto, fonduta and my favorite, tagliolini, a long eggy, golden pasta made especially to honor the white truffles.

After we sniffed and swirled, sipped and swished we ate more than I care to confess.

What I didn’t do, was actually hunt truffles.

Persistent wet conditions made it impossible to take the dogs out (nope, not pigs) but Lynch made the right connection with Oreste Brezza of Giacomo Brezza Winery in Barolo and we scored what we were looking for. After a generous wine tasting over the course of a couple of hours, we bought 200 Euros worth of truffles for our small group to enjoy during our five days in a beautiful villa (c. 1911) set high over Lake Como in the tiny village of Argegno. I fell hard and fast for  the heady, sometimes overpowering, seductive and distinctive aroma and nutty, nuanced  flavors of truffles.

But first there was wine, and lots of it.  And the food! There were too many meals to recount, most, striking high notes for this fish and veggie lover. Did I mention that I’m also just a little addicted to pasta?

Here are some of the highlights:

We had our first taste of the regional buckwheat noodles during our first meal together. The chef for the evening went to Milano and purchased kosher chicken for our dinner. He also bought matza to accompany our meal. Ok. Super sweet and respectful but not the “bread” of choice when I’m in Italy. Definitely a conversation starter with our new friends from Texas.

At Brezza Winery, our first stop, Lynch ran into the lovely Amanda, who had worked for him previously in L. A.  Imagine their surprise.

Since then, she married a local and is studying all there is to know about the wines of  Piedmont. She led us through a generous tasting with passion and an obvious love for the terroir and the magnificent wines they produce. 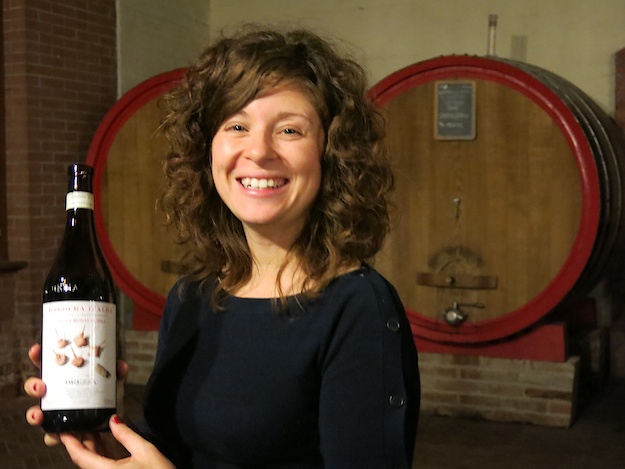 The labels on these wines were particularly beautiful and M. was sure that this one depicted dreidels. Amanda confirmed that this very traditional winery sought a symbol of slower times and old world  games. They landed on the dreidel for their label. I still can’t get over it.

We tasted at least 7-8 wines here before we were offered the golden nuggets, our truffles, wrapped carefully in soft cloth and nestled neatly into a wooden box to ensure their safe delivery.

As we departed, the truffle hunter warned us to watch Flavio, our driver, for signs of intoxication from the overpowering scent of these morsels. Lynch buried them securely under some coats in the rear and Flavio remained steady on the hair pin turns.

We visited with Lynch’s friend, Roberto Conterno at the Giacomo Conterno wine estate where we viewed the cellars that had been established in 1924 by Roberto’s grandfather. We tasted long aging Barolos straight from the barrel.

After, we stopped at Osteria dell’Arco, a Slow Foods approved restaurant, in Alba, the  birthplace of the Slow Foods Movement.

We dug in deeply to regional specialties like marinated peppers sliced into long strips and filled with creamy tuna, served rolled into bite size pieces at room temp.

We tasted the first of many plates of baccala, salt cured cod. Why not top it with truffles? 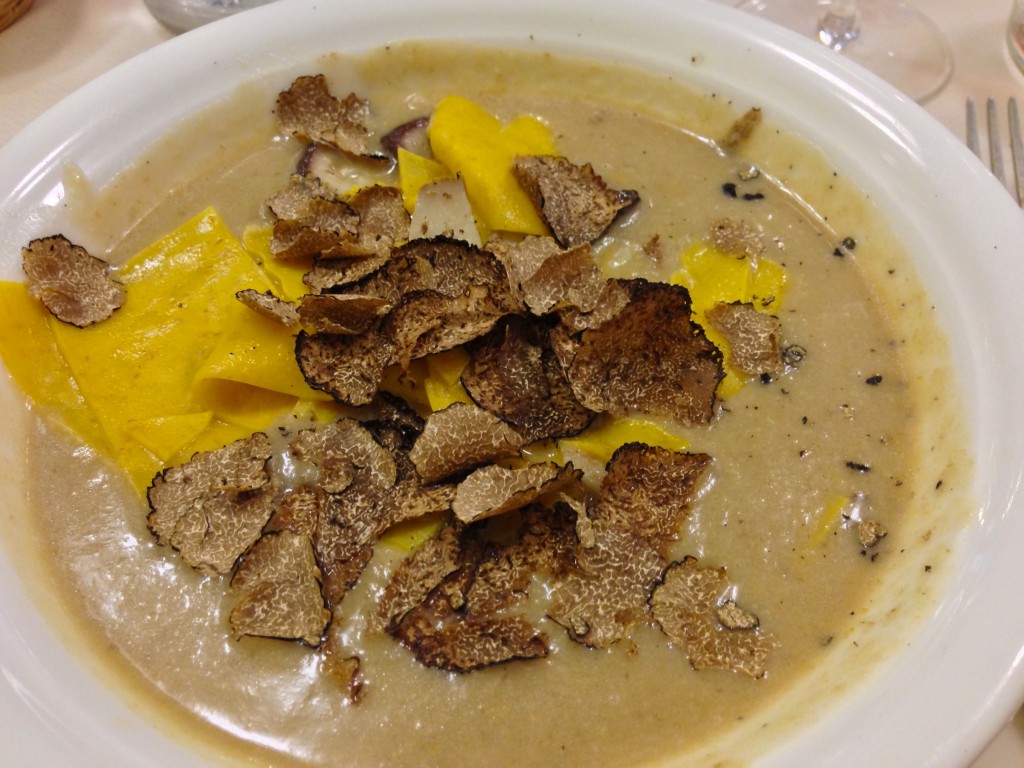 The weather really didn’t cooperate and we had some time to kill before dinner so Lynch called his buddies at Vietti Winery and they hosted us with great gusto. Those of us who could tolerate the cold and damp conditions, were treated to a walk through tunnels in their cellars that dated from the 1400’s. We tasted  their award winning, rich and round Barolos  from their private Reserve and enjoyed watching the reunion between Lynch and old friends.

The next day, with our stash of truffles in hand, we welcomed Slow Fooders, collaborators and writers, Eugenio Signoroni and Francesca Farkas to our villa. They taught us to make two pastas:  tagliolini, the Piedmantese special, and a simple ravioli filled with ricotta and parmesan. 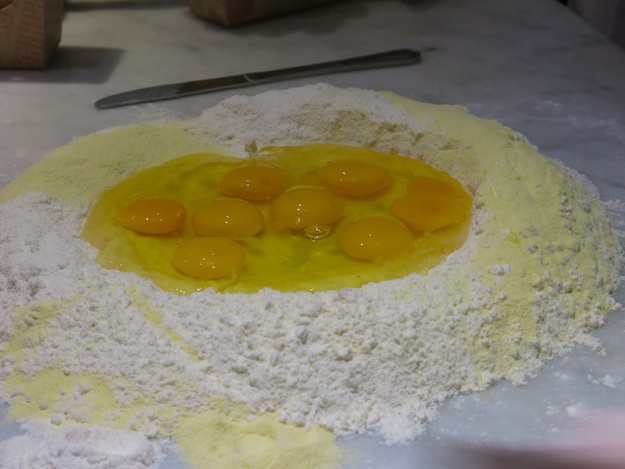 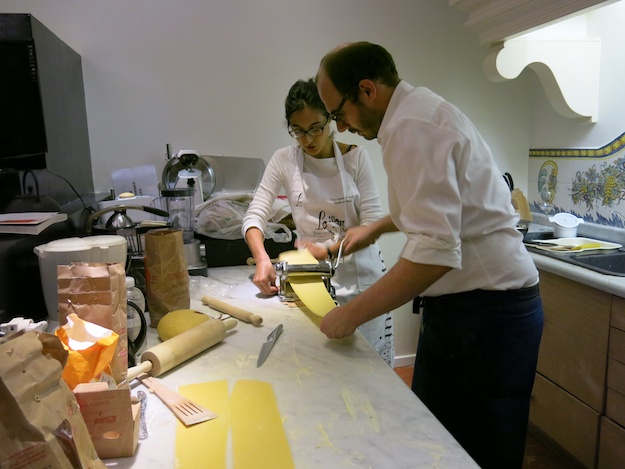 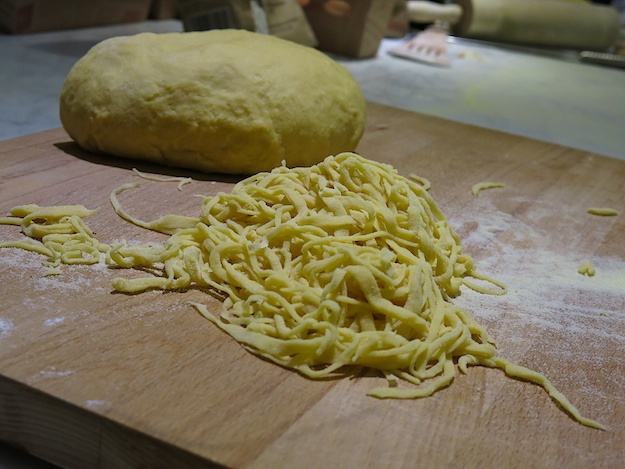 The menu choices were designed as a simple canvas for our precious tartufi. I watched Francesca carefully chip away at the dirt crust on a couple of truffles (no washing!) before Lynch took charge of shaving them over soft poached eggs with cheese fonduta and our two (!!) pasta courses.

The soft poached egg with cheese fonduta (butter, cheese, milk worked with immersion blender) is the classic Piedmontese way to create what Lynch called “the ultimate delivery system” for tasting truffles.  The heat of the dish releases the heady flavors of the black truffles while the yolk was a rich match for the earthy slivers.

Another great Lynch quote, “I’m about to grate these babies over your pasta in a way that would force you to mortgage your home in the U.S.” Truly, we were overdoing the truffle madness, but we traveled this far and wanted to take full of advantage. 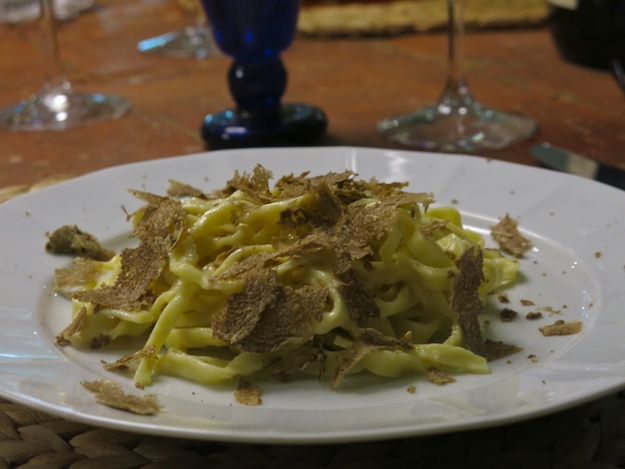 White truffles are more precious and aromatic and graced the tagiolini we made. They were crisp, nuanced and slightly nutty. 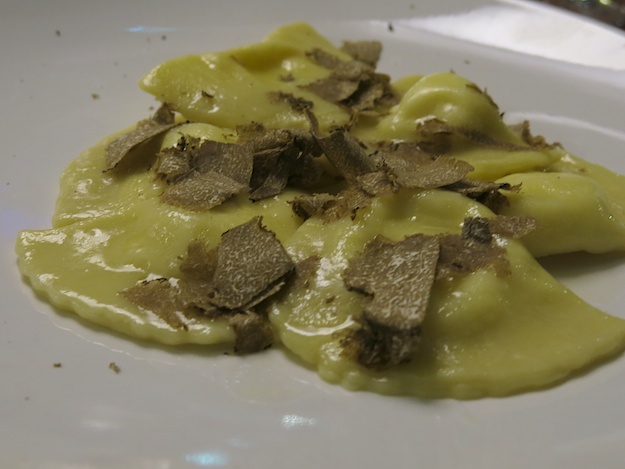 We topped the ravioli with black truffles. The simple ricotta and parmesan filling and glossy coating of butter allowed the truffles to strut their stuff.

I must mention the Lavarello, a sweet, white fish from the lake below. Chef Signorini showed me how fresh it was by pressing the flesh, checking the eyes and noting an almost sticky, elasticity to the skin.

After the fonduta and two pasta courses, it was almost unnecessary to move onto the fish course but plated with unadorned, sauteed tiny eggplant, peppers and zucchini, it was refreshing to nibble at the simple and straight forward preparation. 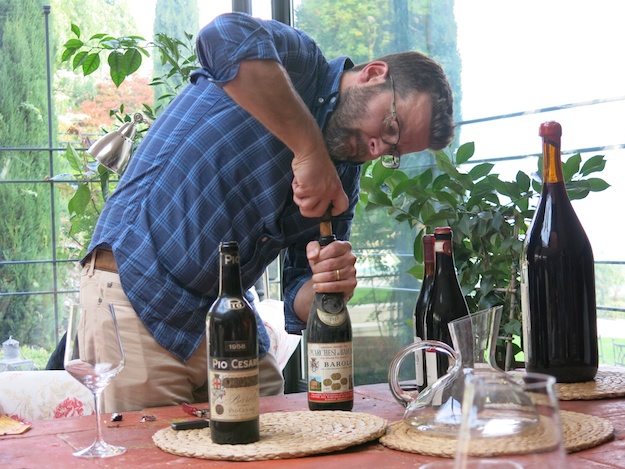 That evening, Lynch took us through a wine tasting of the decades, beginning with a 1958 Barolo Nebbiolo that was very difficult to uncork. For this one and subsequent wines we tasted, he warned us that he “might get a little shrapnel in it”, but used all sorts of tools and tricks ranging from coffee filters to a tool he called “ah-so”.

He used it to pull out the cork with surgical precision and provided it for this photos,  triumphantly noting that it was undamaged.

The next day at Arpepe Vineyards, along Italy’s Alpine border with Switzerland, we marveled at the steep terraced rows of vines, heavy with ripe, juicy grapes ready to be harvested in about 10 days.

This 150 year old winery is owned and operated by the fifth consecutive generation of winemakers and growers here. Owner, Isabella Pelizzatti Perego guided us through a beautiful tasting of their Nebbiolo wines at her winery.

We enjoyed a delicious meal at Ristorante Cantinone in the Sport Hotel Alpina (one Michelin star) where we felt more like we were in Switzerland than Italy. Some found the menu challenging but I loved the fried, pickled anchovies smothered in onions and served at room temp.

Some of my dining companions actually had to look away as I feasted on these slightly saline and savory swimmers. 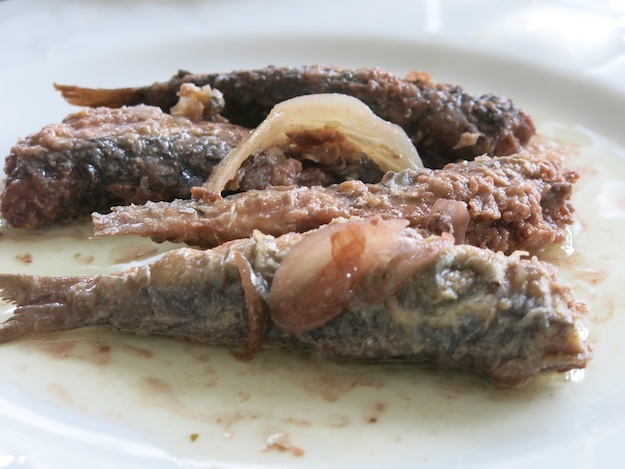 And our first tomato sauce siting: 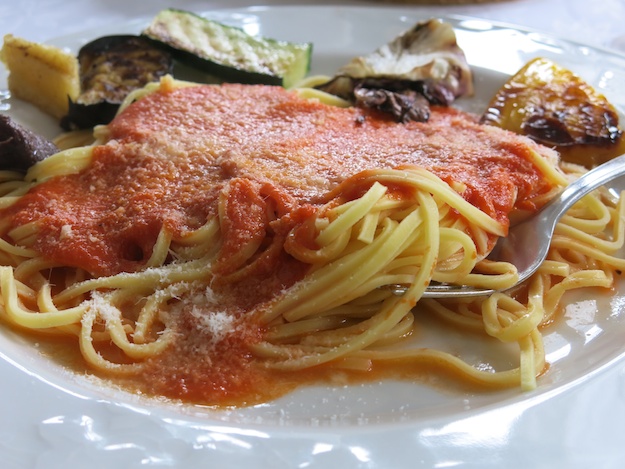 The next day we tasted sparkling whites from the region of Franciacorta at Bellavista with the esteemed winemaker, Mattia Vezzola. It was a privilege to taste with him and learn about these elegant, crisp, sparkling wines. I will be searching for Bellavista Franciacorta next time I want an elegant, appealing and feminine bubbly to toast with.  And I’ll remember to never call them champagne.

After our tasting, we  dined at the magnificent two Michelin star restaurant, L’Albereta. More formal service and fastidious preparations were perfectly in synch with the hotel’s old world charm.

Pastry encased Turbot was presented and filleted table side. The delicate white fish benefits from this traditional preparation as the slightly salty pastry seals the fish in a herb infused casing, locking in the moisture.  When the crust is ceremoniously sliced open, the herbaceous aromas are released, revealing a succulent, mild white fish. 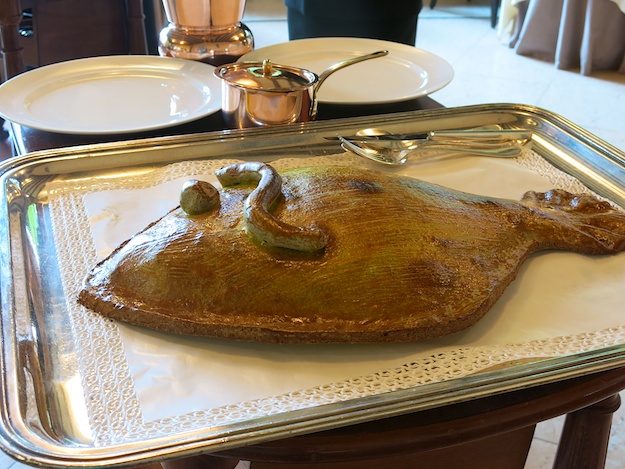 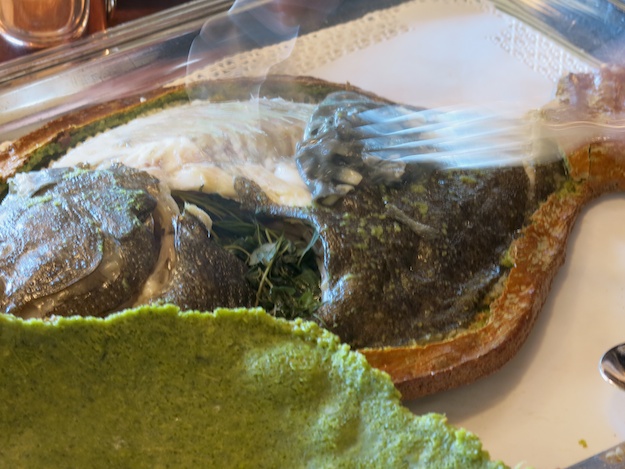 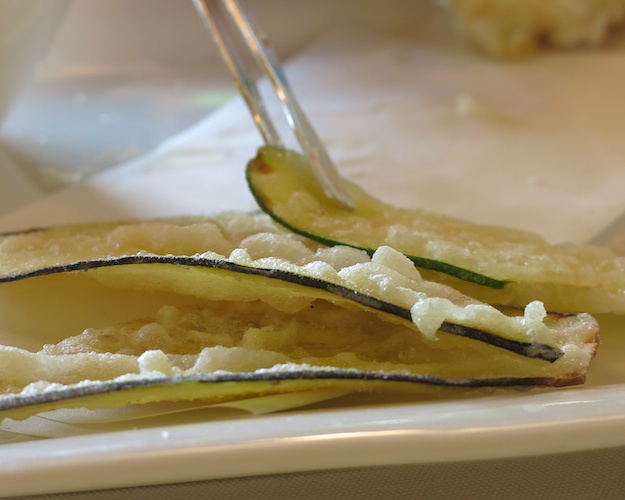 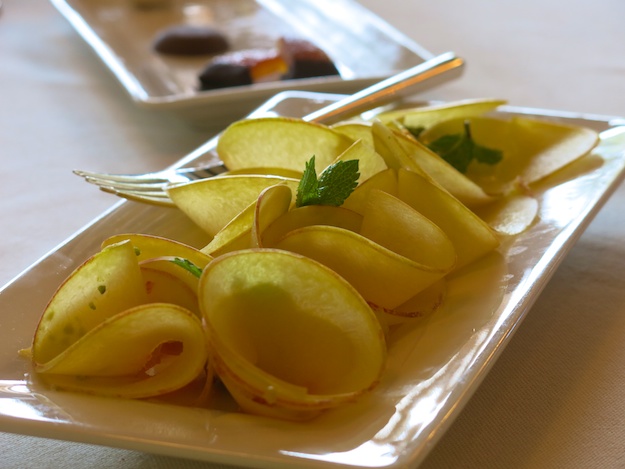 Our last day was spent in Milano with our final meal at Ristorante Cracco.

Magnificent, colorful, and sometimes enigmatic twists on classic Milanese cuisine were modern and even enthralling after having eaten such heavy uncomplicated food in the high mountains surrounding “our” Lake Como and further north.

We bid a fond arrivaderci to my new favorite region of Italy. 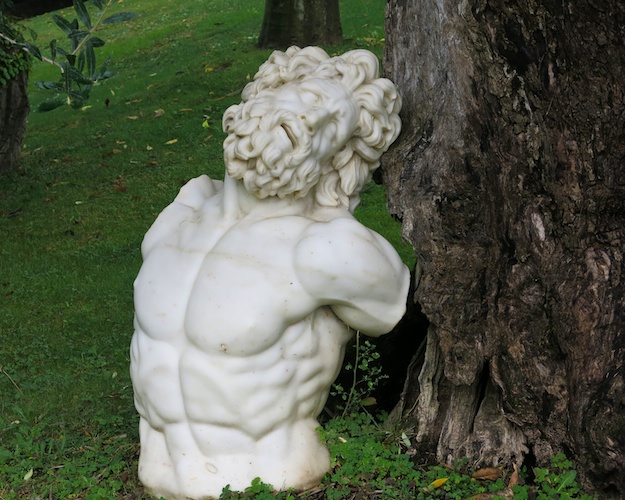 David is considered one of the foremost experts on Italian wines. He is the owner of St. Vincent, an acclaimed tavern in San Francisco’s Mission District. He was most recently the Wine Director of San Francisco’s Michelin-starred QUINCE, and its sibling COTOGNA and was named 2011 WIne Director of the Year by San Francisco Magazine. David is also the Contributing Wine Editor at Bon Appétit, where his “Wine Insider” column appears regularly.