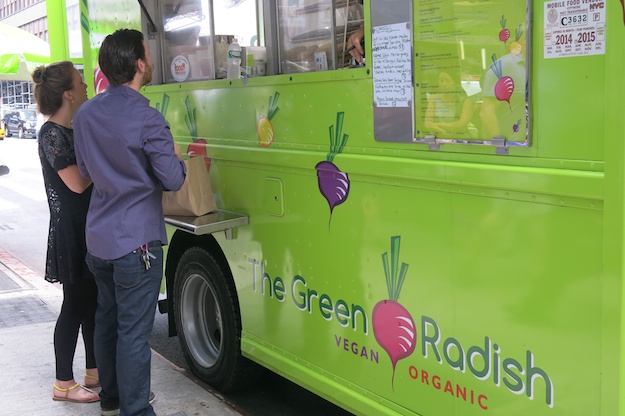 If you ever told me that I would be eating at one of those tables in the divide on Broadway in Times Square, NYC, I would have called you meshugeh.  But that’s just what I did the other day when one of my lovely and most responsive readers, N, ice cream maker extraordinaire and wildly enthusiastic eater, encouraged me to join her for lunch. I met her in my least favorite area of town to check out The Green Radish, a vegan, organic food truck that roams NYC 5 days a week.

Did I mention healthy, vegan, Time Sq. in the same sentence? It’s hard to believe, I know!

If only we could have found some shelter from the blazing sun…. but never mind. If you love healthy eats, and want to grab some on the run in midtown or any of the other changing locations,  The Green Radish is a great pit-stop. Bring it back to your office or wait for cooler days, though.

We had a crazy time with melted RawOne oozing over my tasting buddy’s gorgeous leather bag. She took one for the Kosher Like Me tasting team with grace and good humor, I must say!

James Rafferty is the chef/owner behind The Green Radish. As a long time vegetarian, he amped it up with his vegan diet and hit the road with his bright green truck and friendly crew only 9 months ago. When he celebrates his one year anniversary in September, he will have fed thousands of New Yorkers, most likely, not too many vegans.

His food is so fresh, so delicious, so healthy, that anyone lucky enough to work or roam the neighborhoods he parks in would be meshug to NOT check out his eats.

Rafferty is a  grad of the Culinary Institute of America (CIA) and worked at numerous 3- star Michelin restaurants in Europe before returning to NYC where he worked alongside Chef David Bouley at Bouley and as Executive Chef at Boughalem in the West Village (now closed). His interest in using the purest, most nutritionally dense and vegan ingredients prompted his shift to rolling mobile.

Despite the sweltering heat and the long lines, The Green Radish team was patient with the many questions patrons served up. The menu had plenty of choices for all tastes, including a Chilled Garden Medley  (soup) of cucumber, tomato, jalapeno and avocado . The daily Farmer Salad of greens, asparagus, roasted red peppers, heirloom tomatoes and pumpkin seed dressing was a reflection of summer’s bounty in the NJ markets. 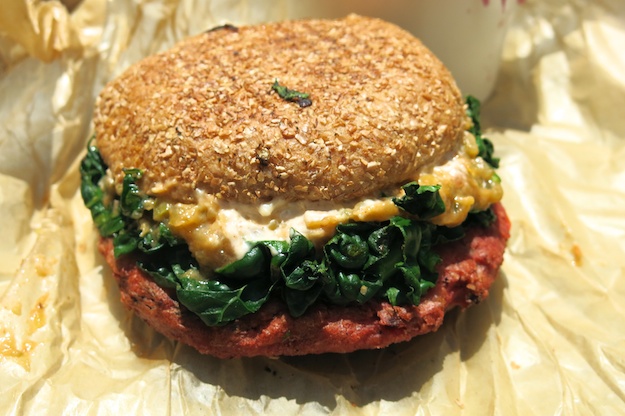 Of course, we chose The Special and loved it for its fuchsia (no doubt that it came from roasted red beets) brightness and seriously stacked toppings of “melted” onions, pickles, tomato puree, grilled kale and chipotle mayo.

This Roasted Red Beet Burger was a huge and satisfying treat. Messy? OOOOH. You betcha.  You’ve been warned so grab a few extra napkins. 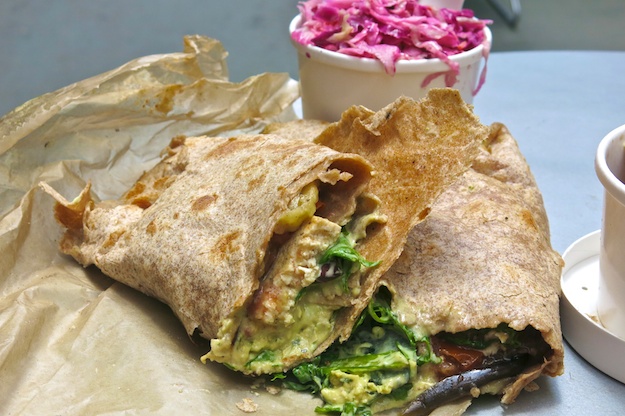 Any dish can be ordered as salad or wrap. We moved on to The Green One in a wheat wrap. Forgive the pic, friends. It was messy and delicious and we ate in a hurry cause this redhead really can’t handle that much sun. But the grilled rosemary tofu, hummus, fennel crusted eggplant, thick slices of local tomato and bright green parsley sauce was a sloppy delight.

And while we made the mistake of ordering the RawOne, a chocolate brownie with dates and hemp seeds, which melted in a liquid chocolatey stain while we munched away at our lunch, we were thrilled to taste Rafferty’s now famous DONART. 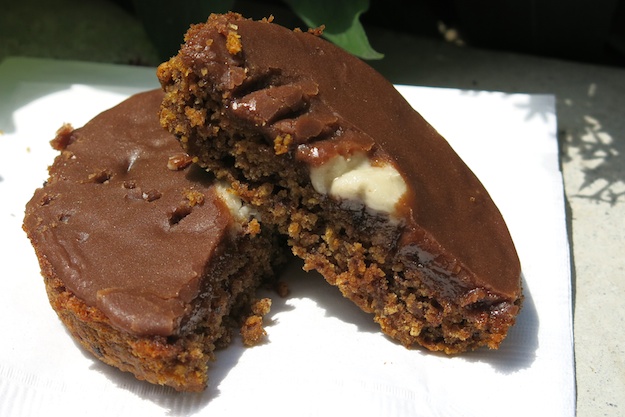 Here’s another hybrid dessert, a sort of healthier cousin to the Cronut of Dominique Ansel fame.

It looks like a tart, tastes like a donut and is actually nutritionally dense. You don’t need to pay attention to the delicious ways Rafferty has incorporated great ingredients like ground flax seeds, organic cocoa powder, dark chocolate and a combo of whole wheat flour with oats, into his DONART. But one look at the ingredients and you know this Chef actually cares about what he’s offering NYC patrons.

The Donart is $5 a pop and comes in three flavors: the Old School Cinnamon Sugar Donart with Chocolate Glaze and Vanilla Swirl; the Glazed Double Dark Chocolate Donart; and the Vanilla-Almond Donart with Raspberry Glaze and Mango Dots.

Healthy eats are rolling on the streets of NYC. It’s a dream come true!

The Green Radish posts their daily menu and truck stop locations on their facebook page and twitter feed. 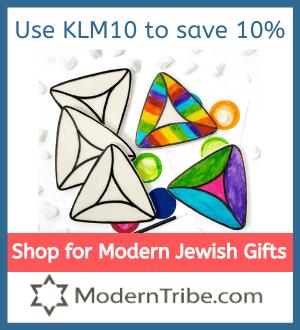