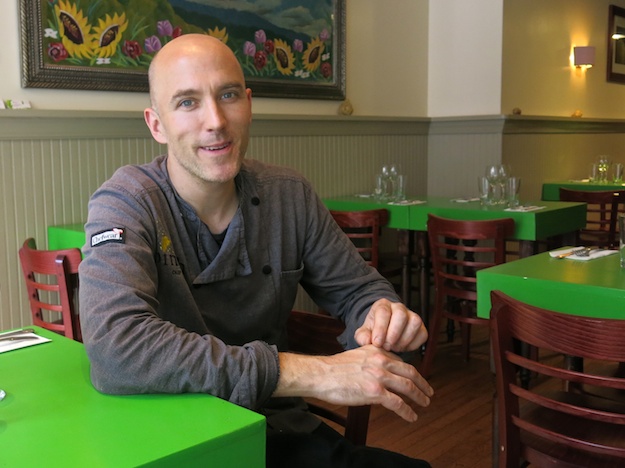 If you’re staying local this summer but dreaming of Paris, head to Table Verte on 7th Street in the East Village, NYC, for a taste of traditional bistro fare. Well, maybe not so traditional since Table Verte is vegetarian. And as far as I can see, it is the only French vegetarian restaurant in NYC.

That alone, bumped this spot to the top of my “must check it out” list.

Chef Ken Larsen was happy to take some time to chat veggies with me. He is the sole cook and pastry chef in Table Verte’s shoebox sized kitchen with two burners on the stove and one dishwasher to lend a hand. So what does this Brooklyn native know about Parisian bistro fare?

After training at the French Culinary Institute (before he became vegetarian) he headed to Paris, where he observed, shopped and cooked the French way. He admired the attention paid to vegetables, not as a garnish or necessity but as a celebration. 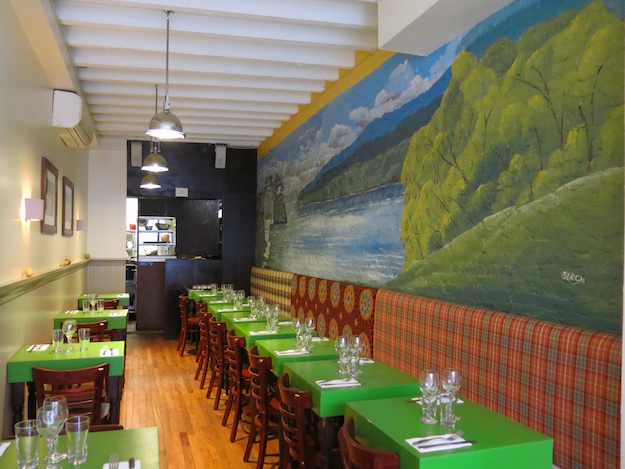 Larsen focuses on traditional French techniques to produce approachable Bistro fare. There is nothing haughty or disguised here; you won’t find any mysterious protein substitutes filling in for animal protein.  He shops Hunt’s Point, seeking mostly organic produce and responding to seasonal availability by changing his menu weekly, or even daily.

E. and I put ourselves in his hands, asking him to prepare his favorite dishes for us. I asked him to steer clear of the most approachable dishes: Mushroom Ragout over buttered pappardelle, Eggplant Lasagna (served with harissa chickpea ragu) and Goat Cheese Tartin layered with shallots, truffles and 180 day old Gruyere. There’s nothing wrong with these dishes. In fact, they are friendly and familiar. But I was looking for the fast track to Paris fare and hoped the chef would take me there. 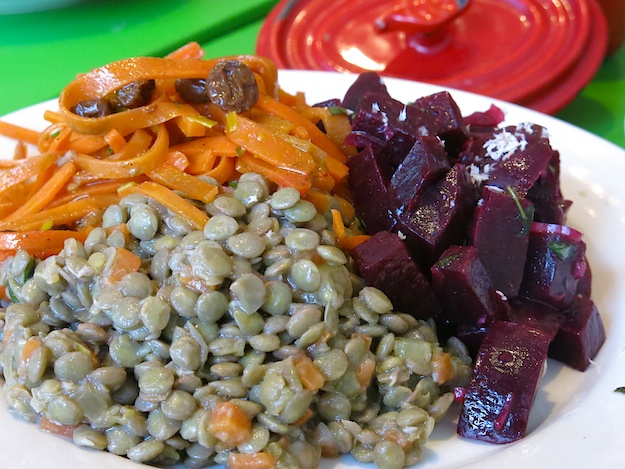 Larsen arranged the Assiete de Crudites so we could try a selection of salads  (all vegan and  gluten free). Generous mounds of Lentils Vinaigrette, Beets with Horseradish and a classic Carrot Salad (not on the menu) would have been enough for dinner but it was only the beginning.

Larsen is generous with herbs and other “supporting flavors” as he rounds out and adds layers to simple vegetable profiles.  Leeks and harissa seasoned crisp julienned carrots while classic Dijon added the necessary sharpness to vinaigrette moistened lentils. I was searching for something more interesting in the beet salad, maybe more tarragon or a touch of vinegar to balance the natural sweetness. 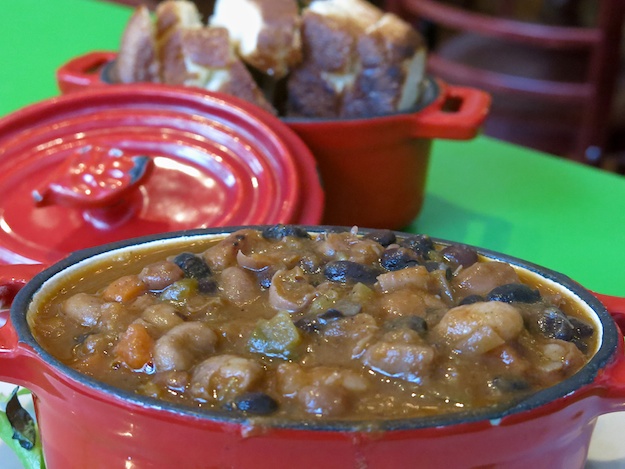 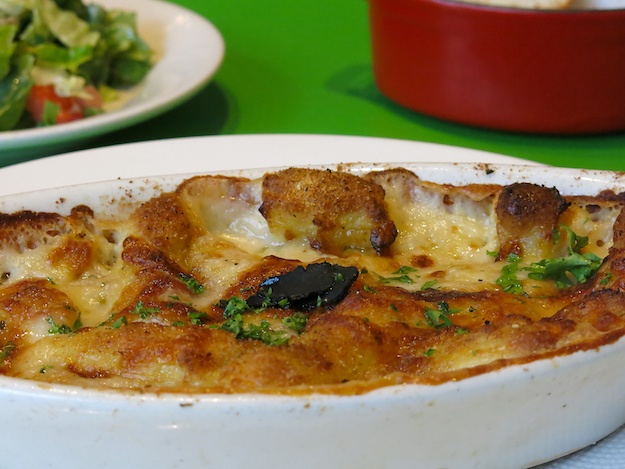 Gnocchi Parisienne au Gratin was the most decadent of all of the dishes, with creamy Mornay sauce and nutty swiss cheese faintly scented with truffles. French gnocchi is a souffle utilizing pate a choix ( dough used to make profiteroles and eclairs) rather than the more familiar Italian potato dumplings. Get ready to spend your calories here but what the heck, you would in Paris, anyway. 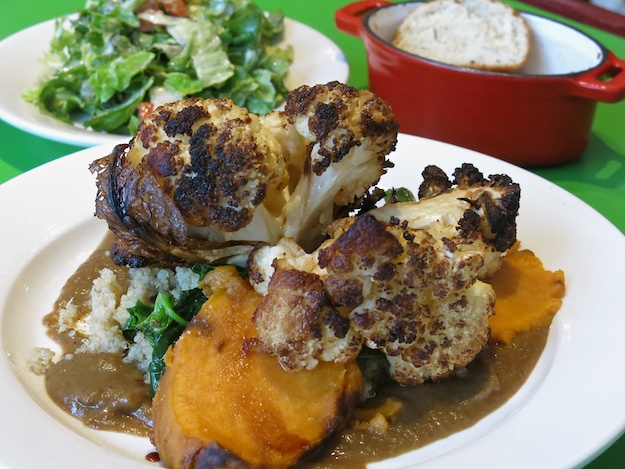 Choux Fleur Roti (vegan and gluten free) was a hefty plate of golden roasted cauliflower. Browned and crunchy, it graces a mound of rosemary scented quinoa and a few cinnamon infused roasted yam slices over sauteed greens. An enigmatic and delightfully sweet and salty sauce of fig and caper puree hugged it all. Somehow, it works. 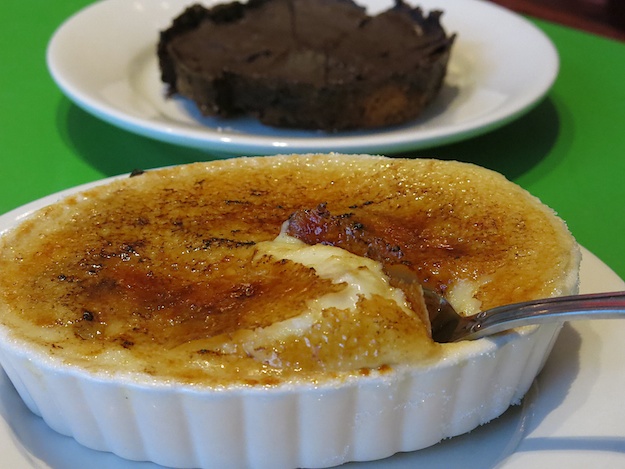 Among the desserts are a number of gluten free and vegan options. We started with ( very non-vegan) Banana Brulee with chunks of mashed bananas and nilla wafer crumbs bathed in Creme Patisserie nestled under a perfectly torched caramel crust. Divine. 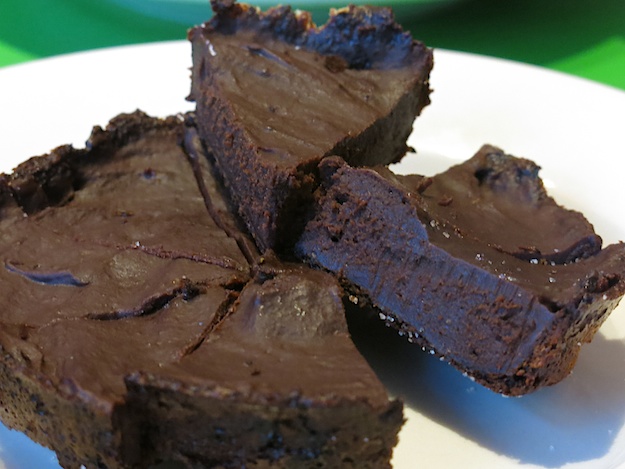 Ignore the fact that only a tiny portion of Table Vert’s menu is online. That is not where their efforts are going.

Ignore the slightly sticky tables that could use a good spritz to clean ‘em better (can’t and won’t find an excuse for that). Go here for the authentic French bistro fare and you’ll be transported and thrilled that the entire menu is fair game. And with so many clearly marked options for vegans and gluten free eaters, in addition to some friendly basics, your whole crew, including meat eaters, can be happy here.

For now, Table Verte is BYOB. A small corkage fee is charged to open wine and beer. No hard liquor allowed.

I turned to Boston blogger Molly Parr for this easy and flexible recipe for Moroccan Carrot Salad. Find her mostly vegetarian perspective and very funny voice at Cheap Beets. With a windfall of bright bunches of carrots about to hit your local markets and CSA shares, this is a great one to have up your sleeve. Thanks for sharing, Molly! 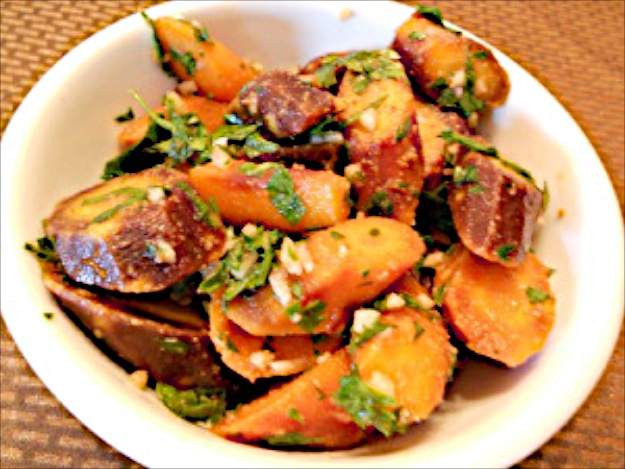 Fill a small saucepan with water and pinch of salt. Add the chopped carrots and set on the stove to boil. Cook until soft, about 10 minutes. To test for softness, pierce with a fork.
While the carrots are cooking, chop your garlic and parsley. Place those in a medium-sized bowl, along with the spices and salt.
Once the carrots have cooked, remove from the heat and drain in a colander in the sink.
Add the cooked carrots to the bowl of garlic, salt and spices. Add the oil and lemon juice.
Stir. Enjoy.