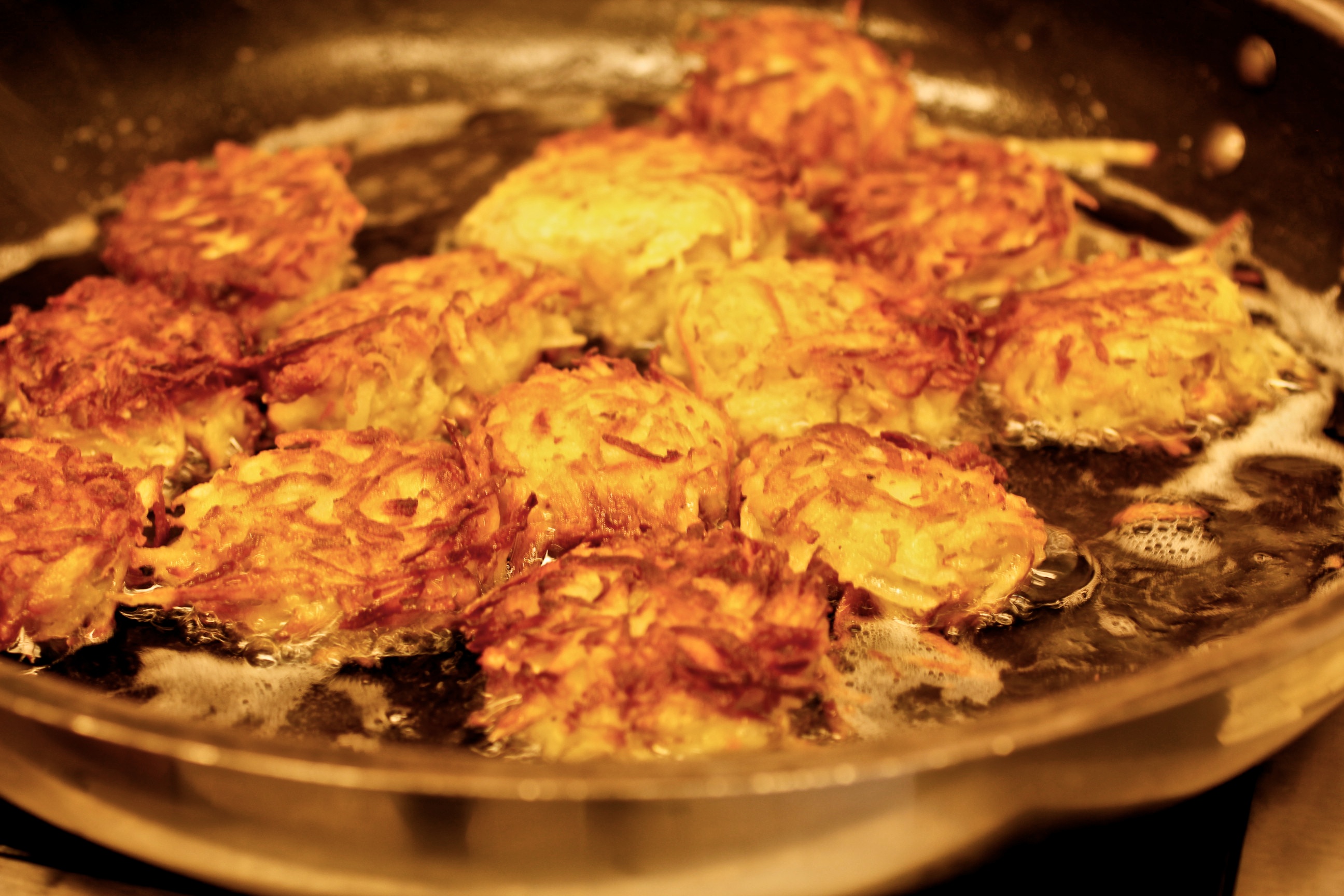 Sizzling Latkes and Gravlax with Chef Russell Moss in TriBeCa

Chanukah is fast approaching. We celebrate from December 20-27 this year.

My head is already sizzling with ideas for latkes variations.You know what I mean.
How do you like your latkes: bite size, lacy and crisp throughout or voluminous and golden brown all over with extra crunchy edges?
And, what about integrating other veggies into the basic potato recipe?
We unexpectedly made latkes the night before Thanksgiving this year. In my enthusiasm to try new veggies, I roasted four, totally unfamiliar and particularly unwieldy, turban shaped, striped squash. They were sweet enough, as my farmer had promised, but too dry to enjoy the way I had imagined.

The hot orange pile of squashy pulp needed to be rescued.

M. jumped at the opportunity to mash them and combine with a couple of eggs, a little flour, salt and pepper and whatever chopped green herbs were still hanging around before they found their way into the turkey.

It’s not hard to turn any veggie into a latke. We love getting creative, but it is best to recognize the difference in consistency and textures when using veggies other than the common starchy Idaho potato.

Remember your beloved grandmothers and do what they did. Feel the mixture with your hands and add a little more flour, egg, or matzah meal. I always opt for more egg before turning to more starch.

Feel free to experiment with dried and fresh herbs. Some like their latkes sweeter, with the addition of nutmeg and a hint of cinnamon. I like them alongside roasted chicken, and add chopped leeks and a green herb like thyme or oregano. 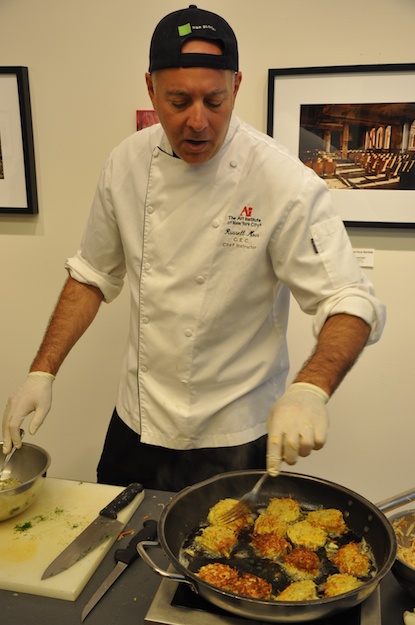 To get my creative Chanukah juices flowing, I attended a      latke cooking class at the 92Y in Tribeca last week.

Executive Chef Russell Moss conducts a selection of one hour  classes on a wide range of cooking topics there. He is deeply  experienced as a Chef, instructor and competitor with both hot  and cold foods.  He is the force behind the creative food  programming there.

Now I know my way around a basic latke and didn’t really need  a refresher course. So I was a little blase when the handout  included a recipe for basic latke and applesauce. Still, Moss’s  easy-going, likable manner won me over and I was looking  for tips to share.

Chef Moss plunges his grated potatoes into a water bath in  order to release the starch. I always put my potato quarters in  the water bowl to prevent the potatoes from getting discolored   BEFORE grating them. Releasing the starch by soaking the    grated spuds and then squeezing the water out with your  hands facilitates better browning.

A little water left in the potatoes is ok as the latke is actually  steaming in the center as the outside crisps in plenty of oil.

And, because I know we all debate how much oil to use,  remember that this is not the time to be stingy on the oil, ladies.  It is all about the oil, remember? You are using a good amount  of oil in deference to the historical reference, ok?

I was charmed by the tidbits of new info Moss was sharing. But I really perked up when I spotted a glistening side of salmon, nestled in a pan alongside a generous mound of  fresh dill and salt, on the demo table.

Chef showed us how to make gravlax. It is so simple that it’s almost embarrassing (so don’t tell). 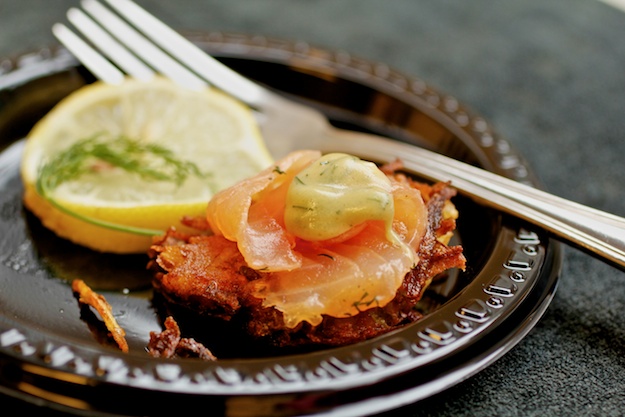 Get ambitious and make gravlax to serve alongside mini-latkes.  A dollop of Chef Moss’s sweet mustard sauce adds another flavor layer and warm color.

Now THAT is exciting.

Thanks Alexander Chack, Food and Beverage Manager at 92st/Y in TrBeCa, for the photo of Chef Moss.

grate potatoes directly into a container of water, enough to cover the potatoes
remove the potatoes from the water, strain and squeeze out the extra water
grate the carrots and onions into the drained potatoes
mix in egg, flour, salt and pepper

heat 1/4 inch of neutral oil into a saute pan
form the potato mix into a ball, just larger than a golf ball
fry until golden brown

Note: make sure the pancakes are cooked all the way through. If they are getting too brown before the inside cooks, the oil is too hot.