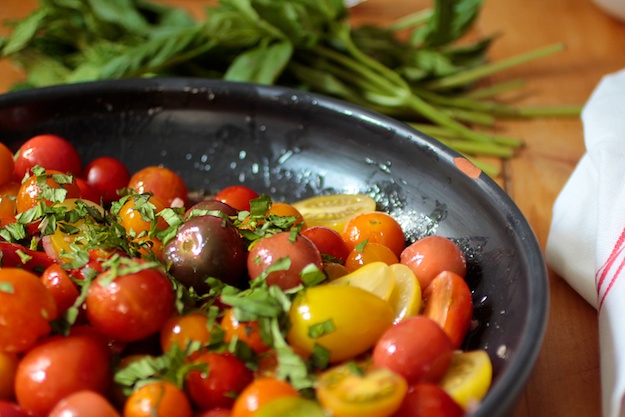 There’s nothing like perfectly vine ripened local tomatoes eaten with nothing but a dash of salt and a drizzle of your favorite olive oil.

Did you know that there are over 10,000 varieties that range in color from pink and white to black and purple? And did you know that this beloved summer crop, bursting with refreshing flavor and most commonly associated with savory dishes, is actually a fruit?

Scientifically, yes, a tomato is indeed a fruit. In fact, it used to be called the Peruvian apple due to where it originated. Now, all you gardeners out there know that by definition, fruit is the ripened ovary of a plant that encompasses a pit or seed; so yes, tomatoes are fruits! Back in the 1890’s, the US Supreme Court officially labeled them vegetables for tax purposes. 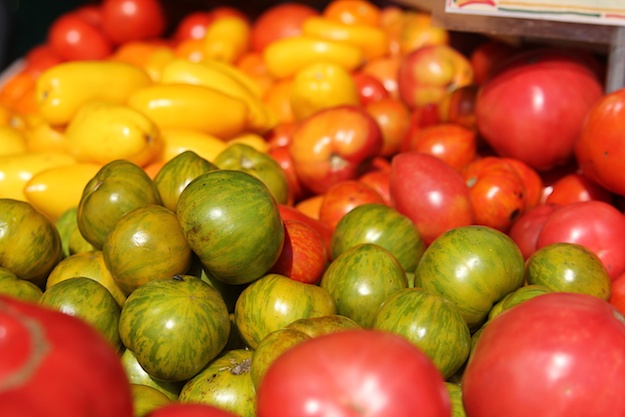 While it might seem overwhelming, the most popular ones out there are the beefsteak, plum, cherry and yellow, all of which can be found growing right here in New England this time of year. Note that the well-known heirloom tomato simply refers to a non-hybrid variety that has been passed down for generations and encompasses a whole family of other variations. 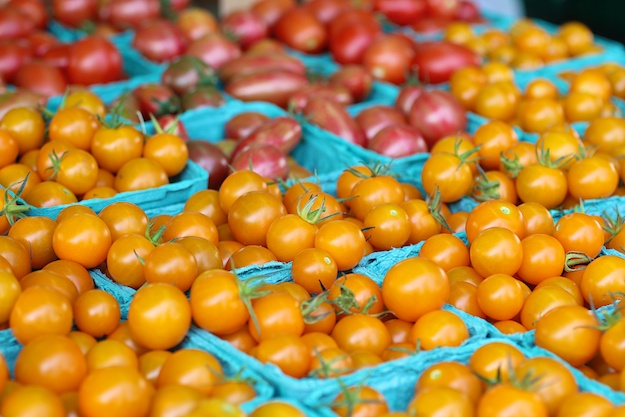 There are really black tomatoes out there? 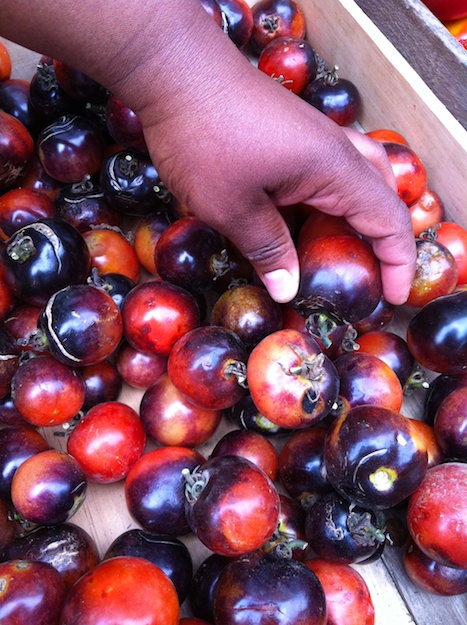 We were surprised too! We knew about purple carrots and white asparagus – but black tomatoes?

This is a pretty new variety and probably hard to find in local markets at this point. Be on the look-out as these tomatoes are said to have impressively high antioxidant levels.

Here’s a quick run down on the different colors of tomatoes: Green tomatoes are lower in acidity than red ones but still have a strong flavor. Dark purple/black tomatoes will have a smoky flavor. White ones, as you might have guessed, are blander. Pinks are quite similar to reds. 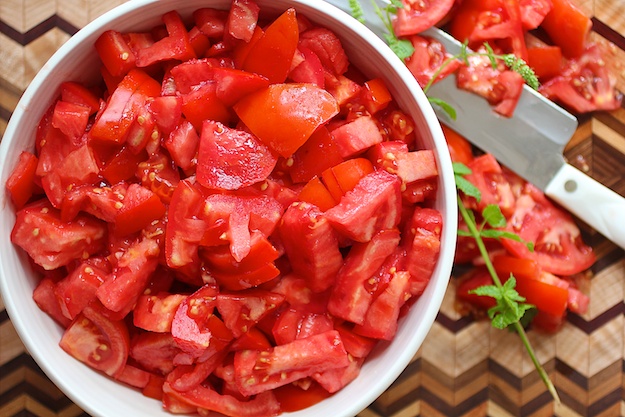 What else should I look for when selecting tomatoes?

We don’t have to tell you that buying local is your best bet for optimal produce, and when it comes to tomatoes, it’s the same story. 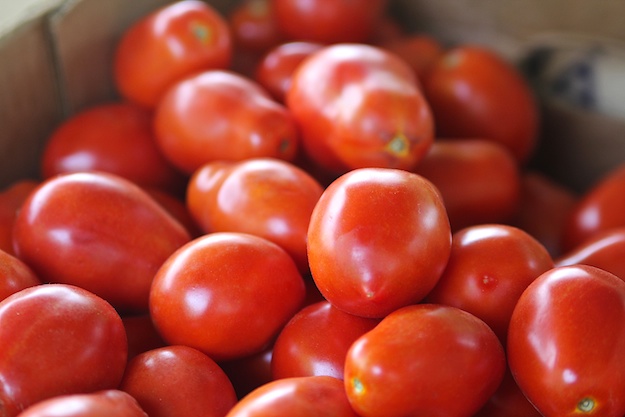 Hopefully, the tomatoes sold at your local farmers’ market will be at peak ripeness. Tomatoes become more flavorful as they ripen on the vine, and most local farmers are masters when it comes to choosing the right time to pick them and bring them straight to the market to give us that fresh, juicy tomato flavor we love. 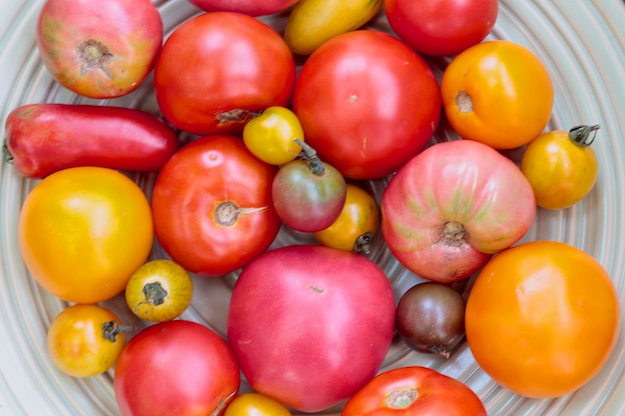 Place them on your counter and you are done. Refrigeration (cold temperatures in general) causes tomatoes to lose their flavor and overall essence so please, don’t even think about it.

Wash them well with cold water. If you are going to be using them in a salad or sandwich and want to keep the seeds in tact, we recommend cutting them vertically. If the recipe calls for them to be peeled, we recommend blanching them similar to how we described it in last month’s peach post. 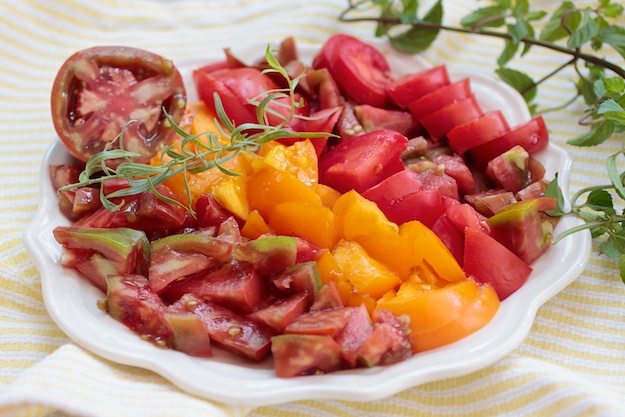 How can I make them last?

You can preserve these great summer tomatoes by creating your own sundried stockpile. Buying sundried tomatoes gets expensive, so why not just make your own at home?

Here’s how to make sundried tomatoes:

If you have a dehydrator, great, but if not simply fire up the oven to about 170 degrees. Cut them lengthwise (it is your choice whether to remove the seeds or not; sometimes the seeds can slow down the drying process) and then place evenly on a baking sheet. We like to sprinkle some olive oil, fresh basil, thyme, and a bit of salt & pepper on top for added flavor. Turn the tomato slices about every three hours until they have that leathery texture – this usually takes about 9-12 hours (varies depending on the tomato variety and hence water content). When done, you can let them cool in a plastic ziplock bag in the fridge or another cool, dark place. 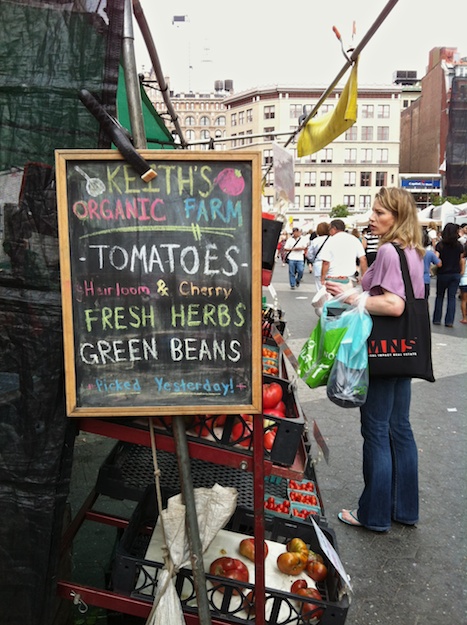 Want to pick your own? Check out the farm closest to you here.

Keep on scrolling to find my favorite peak of season Tomato Soup with Sour Cream (or Yogurt) and Chile Peppers. SO easy!