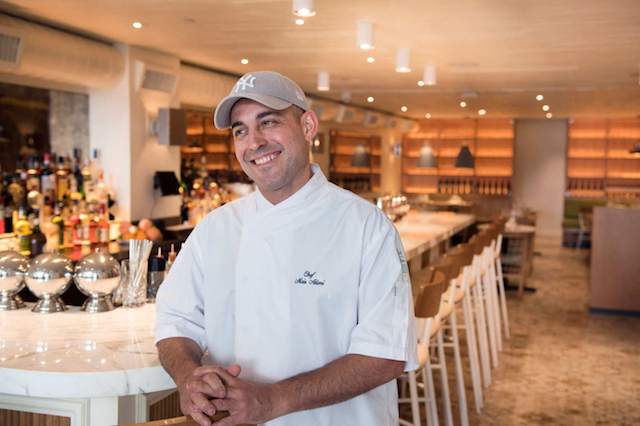 This is NOT an Israeli restaurant, according to the chef and co-owners of Nur. So don’t expect to find falafel or pita, please.

This is Pan- Middle Eastern, meant to be a reflection of the melding of cultures and flavors throughout the Levant and landing with great excitement in NYC. You won’t miss the falafel, promise.

Stepping into Nur, the two week old lovechild of Israeli superstar chef Meir Adoni and Breads Bakery owner, Gadi Peleg, felt like a joyful celebration that was just gaining momentum as we waited for the late spring sun to set.

Peleg and Adoni want to tell the culinary story of the region, not just Tel Aviv and not just Israel.

There was lots of Hebrew being spoken and plenty of hugs and exuberant greetings as Chef Adoni made the rounds. With his Yankees baseball cap perched backwards and his easy smile, he dodged between tables, checking in on friends, greeting fans (from Israeli TV fame) and newbies with equal enthusiasm.

His excitement for his first NYC gig is palpable as the volume quickly escalates. The owners’ interests in the larger region is reflected at once in the cocktail menu and wine list.

Wines come from Israel (most of them are kosher), Crete, Corsica and Lebanon, among other Mediterranean hotspots. We enjoyed the adventure into unknown terroir and landed on a dry white from the Bekaa Valley of Lebanon. For arak lovers, there are at least seven to chose from.

The space is appointed simply, mostly with soothing blonde tones, a wise choice considering how complex the flavors are.

We spoke to Adoni about his commitment to making all of his recipes with vegetarian bases so the dishes can be adjusted for those who are kosher like me or simply meat or shellfish adverse.

Rumors are flying about his next NY restaurant being kosher. Let’s hope.

We started with the Jerusalem Sesame Bagel, a common street cart offering in Israel and other Middle Eastern countries. Breads Bakery’s influence is strong in the breads offerings. In this classic oversized yeasty bagel, the perfect texture and flavors are presented with a sides of za’atar and lima bean bean puree. Dip first so the za’atar adheres to the bagel.

Classic Kubaneh is served with Yemenite schug and grated tomato. I’ve already read enthusiastic comments from diners who say they haven’t tasted authentic breads like these outside of the Middle East.

Of the “small dishes” only one was kosher friendly so we tried the Date Doughnuts. A little worried about the concept of sweet/fish/nuttiness, we took an easy leap, knowing that this dish is one of his classics from his heralded Israeli restaurants, Blue Sky and Lumina (both in Tel Aviv and kosher).

Smoked trout, crushed almonds and minced dates are scooped into sweet and savory mounds, fried and presented nestled atop smooth river stones. These are bold flavor combinations to start, but then dip  each bite into a citrusy curry sauce and you’ll know you’re having an adventure. (I also loved the presentation as chef made the connection between trout fishing and the dark, smooth stones that one navigates if wading in rushing waters. Yes, I fly fish.)

Of the “dishes to share” we loved the Fluke Kibbeh Nayeh– nutty bulgur, chunks of simply cooked fluke nestled in a shallow, generous pan with lots of play between the harrissa (warming), yogurt (cooling) and the tart ring of what we learned was “black Persian lemon powder”. Think: preserved lemons and then more tart. We were encouraged by the Chef to alternate swiping all those flavors together with sips from an accompanying shot glass of gazpacho. The gazpacho provided a neutralizing contrast to the flavors in the pan. VERY yin/yang.

This is not a kosher restaurant by any means but Chef is sensitive to the kosher like me crowd and uses vegetarian broths and bases in all of his dishes. So when we asked if the Casablanca Chraime could be had sans the shellfish, we were delighted to try it.

Adoni’s Moroccan family background is front and center in this savory classic fish stew with pumpkin tershi. When I asked about the hand-rolled couscous (imagine what’s going on this kitchen), he shrugged and said his love for Moroccan food is too passionate to do it any other way.

Sea Bass with seared chunks of fish, was served over freekeh risotto, spring greens and a dollop of eggplant cream. We’ll be ordering it next time.

For vegetarians, there are no compromises with the Smoked Eggplant Carpaccio dotted with feta, tehina, dates and pistachios.

After having such bold flavors throughout the meal, I prefer to veer off towards cooling and simple flavors for dessert. For that, I might have chosen New Middle East, a semolina and mascarpone cream with citrus compote, yogurt crumble, sumac meringue and blood orange sorbet.

Instead, we opted for Flavors of Ramallah, candied rose kadaiff, layered with pistachios and pumpkin marmalade with a scoop of honey sage ice cream.

Although my dessert hankerings lean more towards palate cleansing and less complexity, I admire the sustained creativity at Nur, from start to finish.

One more thing: When I write about a resto for this blog I generally wait at least 2-4 months after it has opened before taking a look. It’s only fair to allow a chef and his team to settle in. I made a couple of exceptions when I dined at Nur on their third night open and this was one of them. I found the service to be extremely well informed and gracious, a credit to two extremely experienced food pros. I look forward to returning as soon as possible.

Note: Nur is NOT a kosher restaurant. It is kosher friendly in that all bases are vegetarian and most dishes can be adjusted to eliminate certain ingredients unless they are at the center of the dish. There are 2-3 fish choices, at least 1 vegetarian dish and plenty of breads to nosh on. And OH! THOSE date doughnuts!

Leave a Reply to Howard