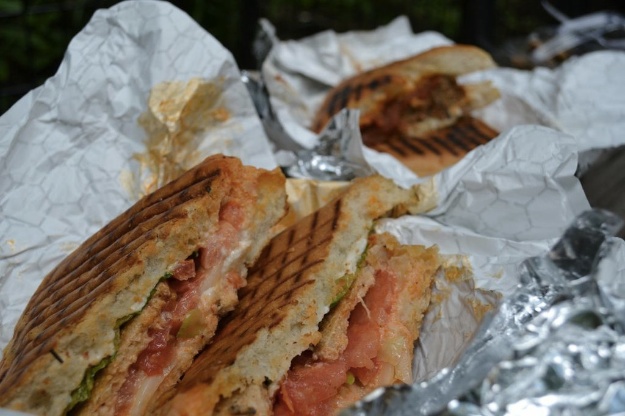 The best way to enjoy lunch at Terri is to not have it there at all. On a nice day, this sandwich bar, which boasts only a handful of stools, is a great place to stop before staking out a cafe table on Fifth Avenue or in Madison Square Park.

Organic, vegan and kosher, Terri caters to just about every food mishegas (except for glutenfree). As an alternative eatery to the chain lunch spots along 23rd Street, it boasts a menu that includes salads, sandwiches, wraps and smoothies. For the Flatiron lunch crowd, this tiny spot provides fresh, fun food with a flavorful kick.

On my first visit I ordered the Thai “chicken” wrap. Fresh lettuce, a mix of carrots and peppers combined with a tender, but chewy chicken substitute hit the right note. Dressed in a tangy peanut sauce and wrapped in a tortilla, it had the right Thai flavor, combining sweet and sour with a hint of spice. 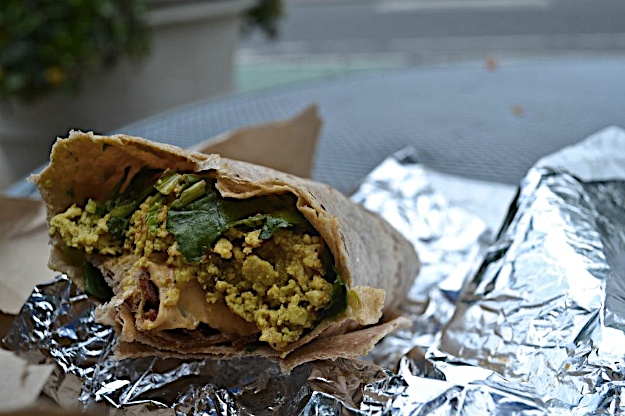 The breakfast scramble I ate on a subsequent visit wasn’t as successful, however. Also a wrap,the “scrambled” tofu was mushier than it was scrambled, and it had a sharp, vinegary taste. The day I visited, the restaurant was out of the vegetarian sausage that accents the tofu. The young woman at the counter suggested I substitute the soy bacon instead, which lent a nice chewiness. But overall the texture and taste of the scramble was disappointing.

The bacon worked better on its own in the bacon cheddar cheese ranch sandwich. This sandwich was probably about as good as it gets if you’re hunting for an alternative to a BLT. Perfectly salty and somewhat drippy, the sandwich felt like I was transgressing on several food fronts from kosher to vegan.

Both the scramble and the sandwich use Daiya cheese, a non-dairy, vegan cheese that actually melts. As my dining companion, also someone who keeps kosher, noted biting into a “meatball” sandwich with mozzarella, “I haven’t had anything close to this in years.” 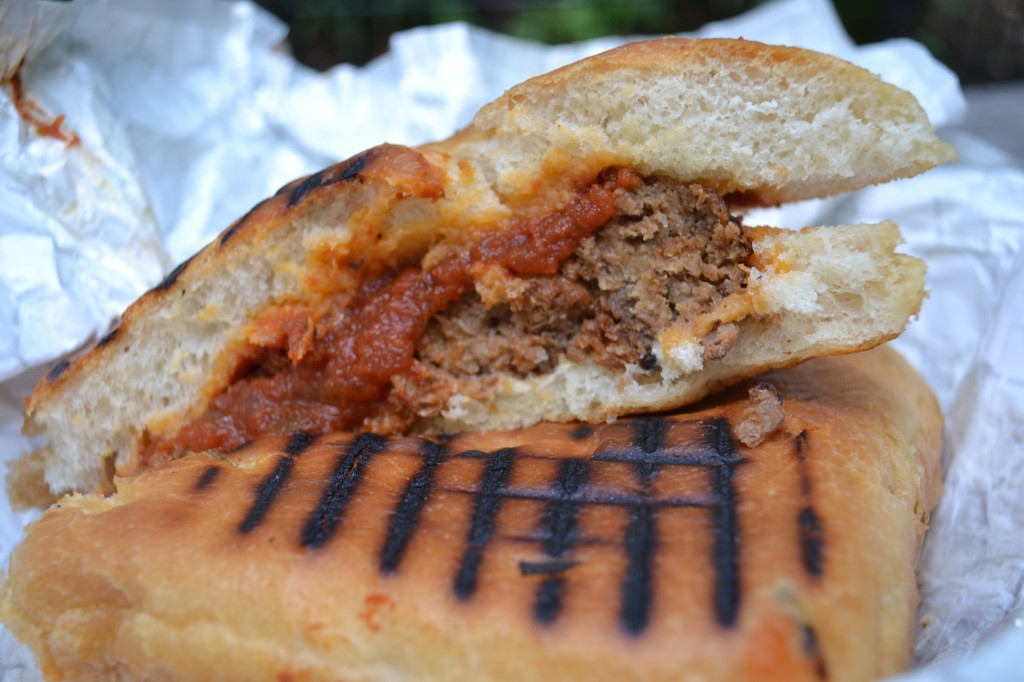 The Buffalo Chicken sandwich is a kissing cousin to the bacon melt, with spicy chicken and a flavorful vegan mayonnaise dressing. It’s a bright, cheery sandwich to wake up the taste buds, making good use of tomato and crunchy celery on a light airy bun. If any one dish approximates its meaty counterpart, in heft and taste, it’s that aforementioned meatball sub. The “meatballs” are pleasantly chewy and dense, the marinara sauce flavorful and the Daiya mozzarella — almost frighteningly — looks like it melted right off of a pizza. 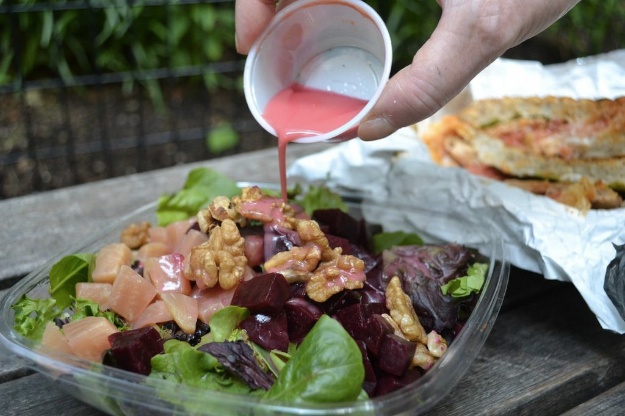 I only tasted one salad, of mixed greens and beets, and it was my biggest disappointment. All the salads are pre-prepared and in plastic containers. This one lacked any spark, with its mix of arugula and yellow and red beets. Walnuts sat in a clump atop, and the orange citronette dressing reminded me, in consistency and in its Pepto-Bismal pink color, of that jarred borscht you can buy, once you mix in a dollop of sour cream. 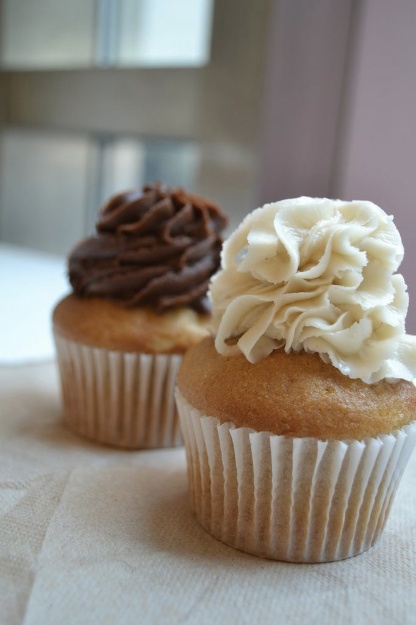 Perhaps the biggest surprise at Terri was the cupcakes. As a baker, I have my doubts about most pareve and vegan offerings. I like my desserts dairy, delicious and decadent. Terri’s vanilla cupcakes are dense and not too sweet; the chocolate are rich and fudgy. The vanilla and chocolate frostings provide sweetness and lightness atop a decent cake. And it was a perfect end to the meal, which might have started to feel a bit holier-than-thou without it.

Founded by longtime friends Chris Cochran and Michael Pease, and named for their mothers, who shared that name, Terri is certified kosher by both International Kosher Council and Uri l’Tzedek, which offers a Tav HaYosher designation. Restaurants that meet the Tav HaYosher standard offer fair pay and hours and meet workplace safety standards.

All the sandwiches and wraps are priced reasonably at $8.05. Salads are $6.89

Marla seriously got into cooking between her freshman and sophomore years of college as she made her way recipe-by-recipe, through “Maida Heatter’s Book of Great Chocolate Desserts.” She is a journalist by trade, who loves to bake and braise, and continues to write and post at www.marlaecohen.com. All photos here are by Marla Cohen. 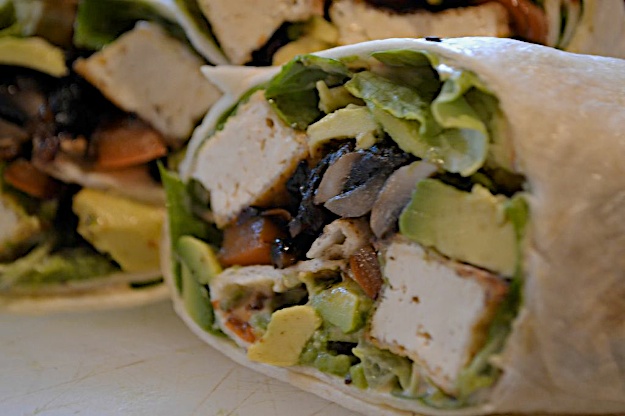 Set the tofu on three layers of paper towel on a plate or cookie sheet.
Cover with three layers of towel and another cookie sheet or plate.
Weight with two large tins of tomatoes and press for about 20 minutes. The towels will be soaked through.
Heat 2-3 tbsp of oil in a large fry pan. Cut the tofu into strips.
Place in hot oil until crisp and brown on one said, about 3-4 minutes. Turn and repeat.
Remove with slotted spoon and drain on paper towel.
Replenish the oil if needed.
Sautee the onions until golden, salt and continue to cook until brown and caramelized.
Remove with slotted spoon, add mushrooms and garlic or garlic skape, cook until brown and soft, remove with slotted spoon.
Cook peppers until charred and soft.
!To Assemble:
Cut avocado into strip.
Mix mayo and hot pepper condiment together and spread on two tortillas or wraps (you can heat them each for about 5 seconds in a microwave to make them more pliable).
Scatter greens on the wrap, leaving a border of about an inch.
Toward one edge of the tortilla, place some tofu strips, avocado, red pepper, onions and mushrooms.
Along the narrow ends of your filling, fold the top and and bottom of your wrap over it.
Along the edge nearest your filling, roll up, so that you have something resembling a blintz or burrito.