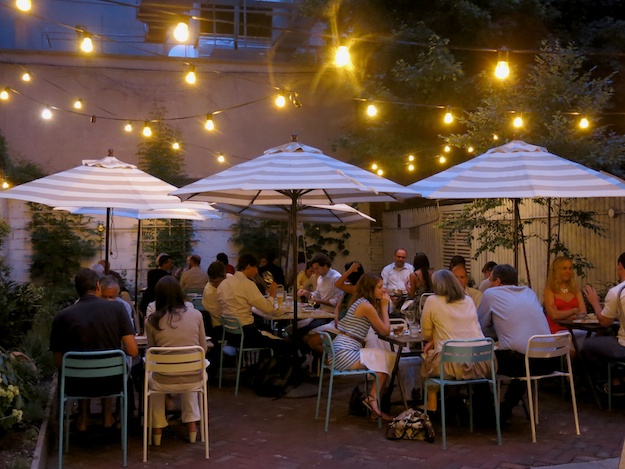 Mediterranean Flavors Sparkle at The Cleveland

On my first visit to The Cleveland we scored a table on their beautiful back patio. As the skies darkened over SOHO/NoLita we appreciated being snugly cocooned from the busy neighborhood.

Co-owners Paul Shaked and Hudson Solomon are in their mid-twenties and bring a youthful energy and a bit of Brooklyn vibe to their restaurant. Their chef, Tal Aboav, came from Balaboosta’s kitchen via Israel. His Mediterranean inspired ingredients and menu choices often point straight back to his roots. 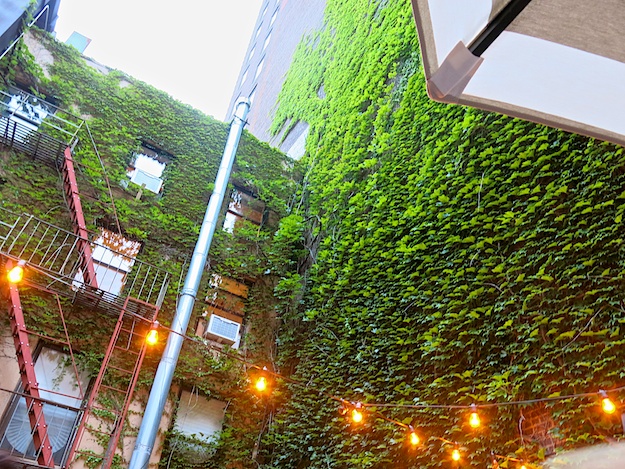 We started our dinner by telling the server that all  five of us eat fish and vegetarian; no meat, no shellfish. No problem. No attitude. She explained that most items on the menu could be teased apart in order to make them vegetarian.

But there were plenty of choices on the dinner menu for anyone KLM or vegetarian, so we dove right into four starters and agreed to share. 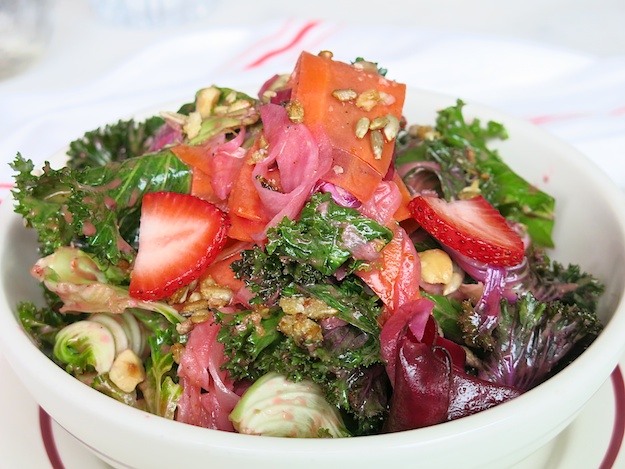 Now, I am a big kale fan but when there are lots of options I tend to steer clear so I can try other dishes. But E. had eaten brunch here a few times and raved about this kale salad so it made the order.

Curly bright green leaves were massaged and tender, topped with pickled carrots, chunks of beets and punctuated by  marinated onion. Candied sunflower seeds, crispy roasted chickpeas and vinegar soaked strawberries topped this out of this world composition. I ate it again when I returned for lunch and it was equally seductive. 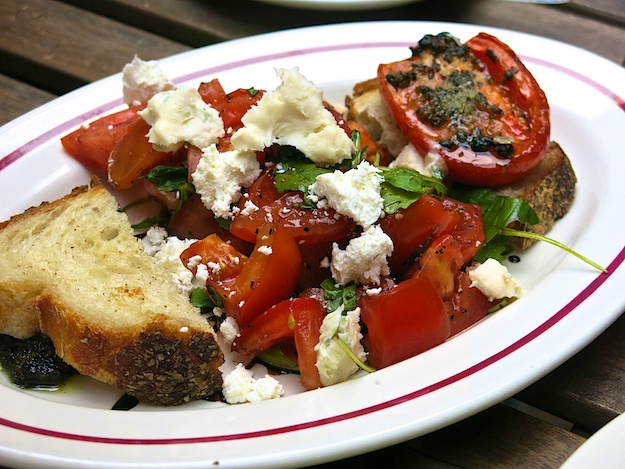 Panzanella was an obvious choice with summer tomatoes at their peak.  Pesto and balsamic vinegar moistened the bread and seasoned gorgonzola and manouri cheeses. I prefer to allow the tomatoes to star in panzanella;  the pesto distracted from allowing the tomatoes to strut their stuff. 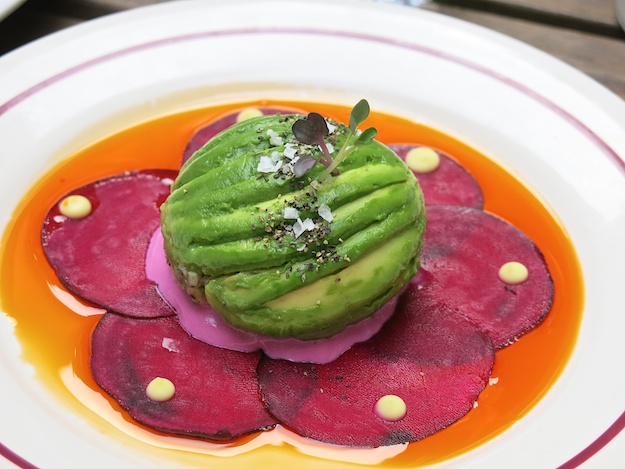 Avocado and Salmon Tartare was embraced by a ring of paper thin slices of pickled beets. There was a great yin yang happening between the acidic beets and the rich, very fresh salmon and generous mound of avocado. Delicious. 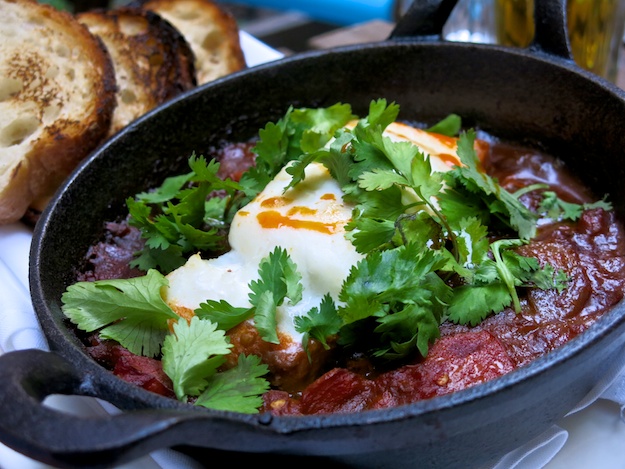 We ordered all three fish dishes on the menu with the guys gravitating towards the Spicy Moroccan Cod, served in an iron skill. The fish was simmered perfectly but  the guys wanted spicy to mean SPICY and hankered for more heat. Next time, they’ll mention it and I bet it will be delivered.

A. had the crispy Branzino with almond-cauliflower puree and house preserved lemons. Oh that crunchy skin…. just right.  Chef Tal Aboav pops a few preserved lemons into his dishes here and there, lending a Mediterranean (more Moroccan)  and more nuanced tartness. 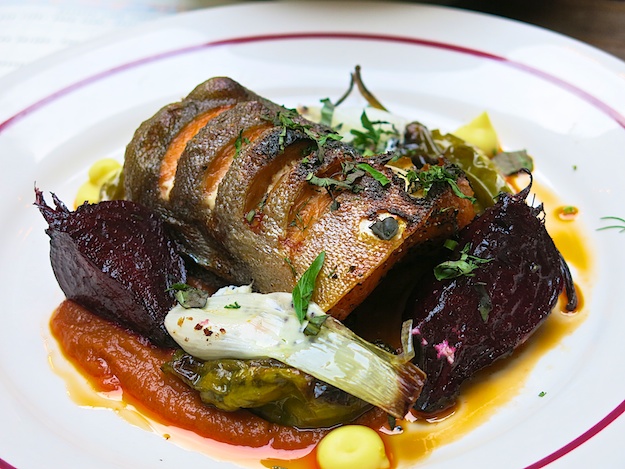 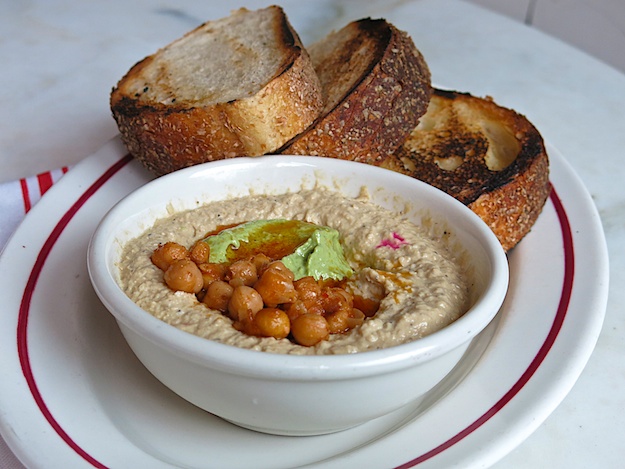 When I returned for lunch a few weeks later, I was thrilled to learn that Breakfast is served until 4:30 each day. Breakfast lovers rejoice!

I jumped right on the Hummus, topped with spiced chick peas and green tehina. Aside from being a little cumin heavy, the texture was chunky and pleasing.  But, I am not crazy about toasted peasant bread with hummus and wonder if the Chef might consider something slimmer, instead. 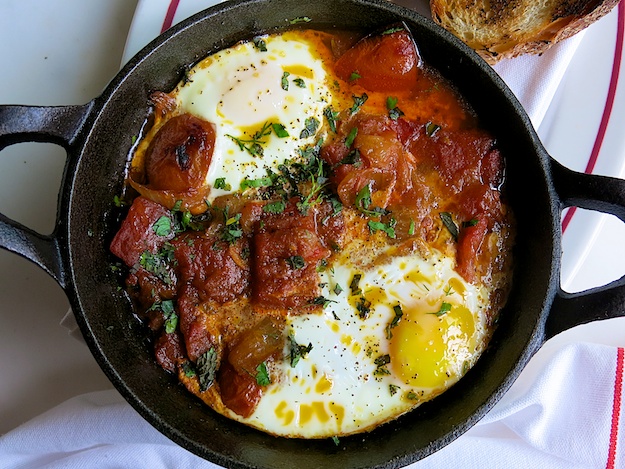 Shakshuka, the darling of brunch menus throughout Israel and NYC, was saucy, with lightly cooked eggs nestled in a spicy, tomatoey pool. Plenty of country bread assisted with the clean-up of the skillet. 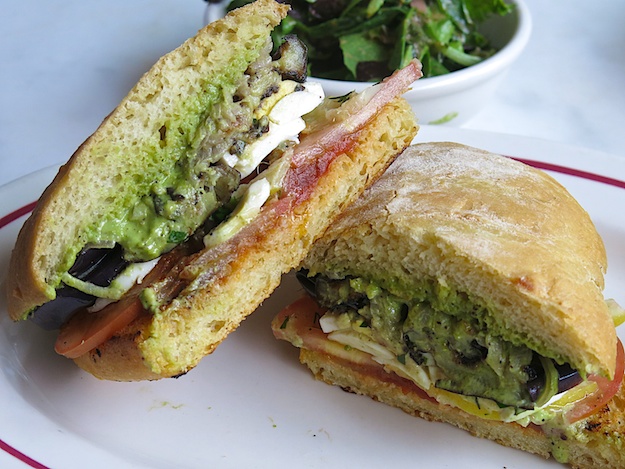 The Israeli influence was more pronounced at lunch and Sabich begged to be ordered. Freshly fried, paper thin slices of eggplant were layered with hardboiled eggs, pickled onions, preserved lemon and green tahini. Each bite was a pleasing contrast of textures.  Sabich may be my new comfort food.

If you’re unfamiliar with this Moroccan inspired sloppy goodness, The Cleveland is a good place to check it out. 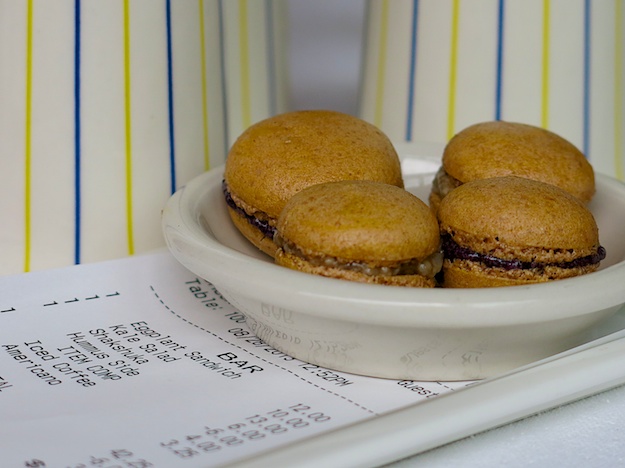 Desserts range from chocolate fondant to rich gelati flavors like Mexican cinnamon and milk chocolate malt. We finished our  lunch with mini house made macarons filled with the slimmest layer of jammy blueberry and banana purees. Tiny bites of sweetness may be the way to go after such a rich meal.

House made sodas (blueberry-mint and hibiscus ginger-ale) are fun non-alcoholic choices. The wine list is robust and dominated by French beauties with a few Italians mixed in. I’d like to see some great American wines from the west coast, upstate NY and L. I. along with a few gems from boutique wineries in Israel.

News in Autumn: Chef Tal Aboav is shifting to warming foods with some great new additions to the menu in about three weeks. Vegetarian highlights include butternut squash ravioli.  The back patio will be tented and heated for the first time, allowing for continued use of that lovely space.