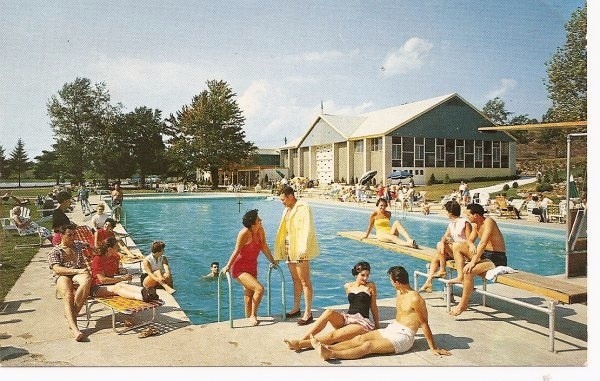 Finally, someone has reinterpreted our favorites and created Jewish food with a twist.

I heard Alan Wilzig and Zach Kutsher in conversation at the 92STY/Tribeca in January. They were chatting about the legendary Kutsher’s Country Club in the  Catskills, the namesake and inspiration for the recently opened restaurant, Kutsher’s Tribeca.

These business partners summoned up images from a different era, one where vacationers ate heaping piles of whatever tasted great, without any concerns about fat, chemicals or origin of ingredients. And it was unlimited.

There were close to 50 senior citizens in the room, all listening intently and grinning knowingly as these boyhood friends reminisced about their summers “in the mountains”.

The great, great grandson of the founders of original Kutsher’s Brothers Farm House, (1907), Kutsher enjoyed telling what it was like to grow up a quarter of a mile from the resort and sit at the “family table” while his grandparents greeted everyone and managed everything.

“Guests” enjoyed long days recreating on the 1500 acre property in Monticello, NY, which included every imaginable outdoor and indoor activity plus a sports camp, golf course and fully equipped lake front . Kutsher’s was the last of the grand resorts from the heyday of this era spanning  from 1920-the late 1960’s. 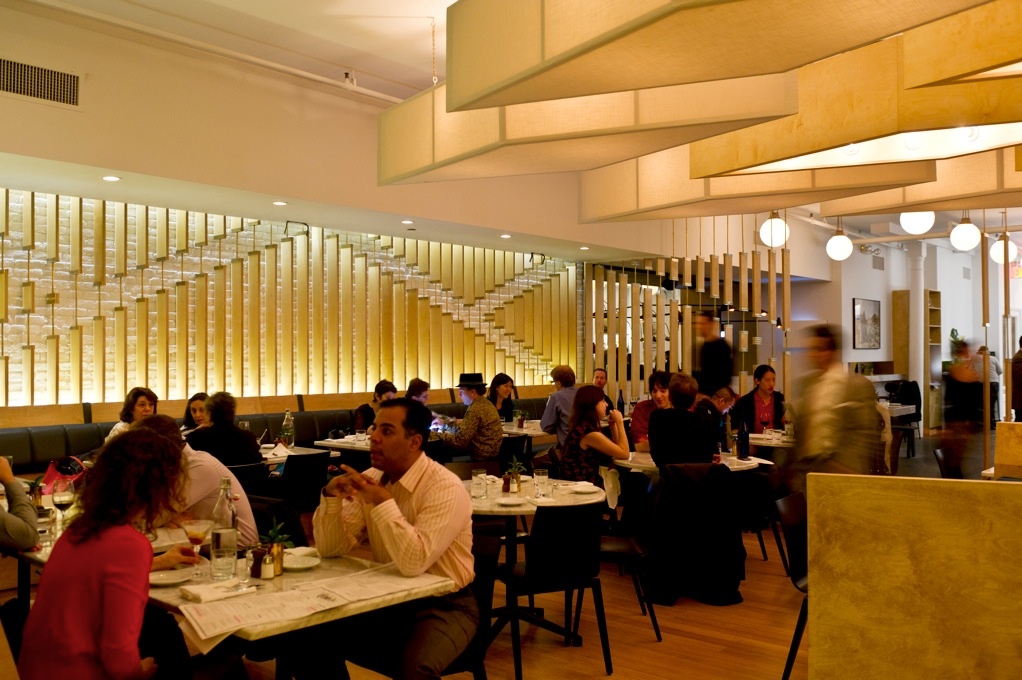 Today, Zach Kutsher welcomes guests to his restaurant that pays homage to that era.  He greets diners, peering over their tables, showing concern for their experience, like his grandparents did when they presided over up to 1200 diners at any given meal at the resort.

At Kutsher’s Tribeca, Executive Chef, Mark Spagenthal, has done away with fatty, bland and colorless foods that some associate with their immigrant grandparents.

He has completely transformed the old European Jewish dishes that graced the tables at Kutsher’s Hotel in its heyday.

Still, the references are all there: kreplach, kasha varnishkas, pickled herring, potato latkes and much more.

The reinvented classics are mostly modern and reflective of our times, with a focus on local and organic ingredients when possible (micro greens in an airy pile atop newly conceived gefilte fish of poached wild halibut), and spare, artistic plating. 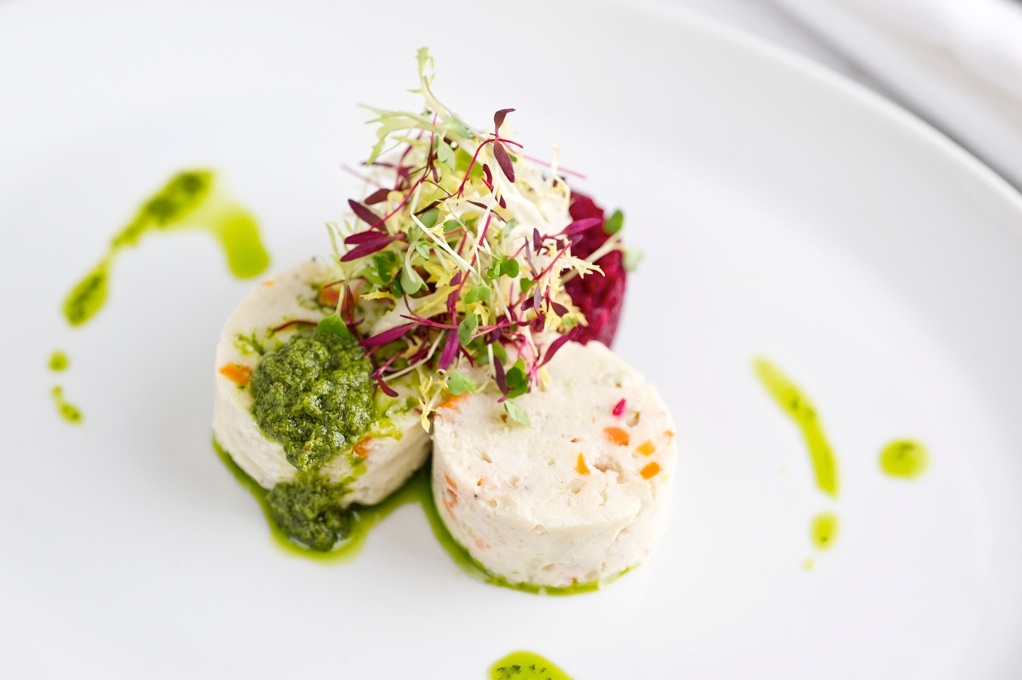 My dining companions were keeping Kosher Like Me for the eve and allowed me to order. We stuck mostly with first course choices and added two entrees, eager to continue exploring these reinvented dishes.

I yearned for more distinction in flavor though, perhaps an herb or some clean fish flavors would have accented the upgrade that went beyond the cheap karp originally used by our grandmothers.  The fresh horseradish (beet tartare in modern speak)  added the requisite sharpness as counterpoint. 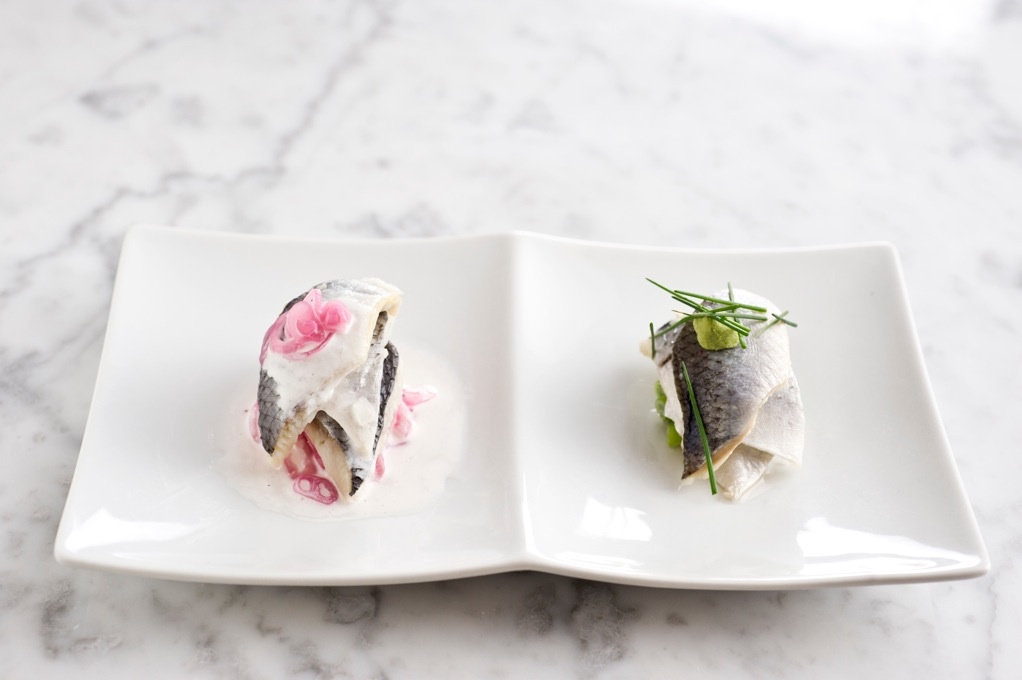 Pickled Herring Two Ways brought me back to my childhood. One half of the split plate presented herring bathed in sour cream with pickled onions. The other half brought the dish forward and sharper with wasabi and yuzu. Herring isn’t for everyone but I love it and was glad to see it offered here. 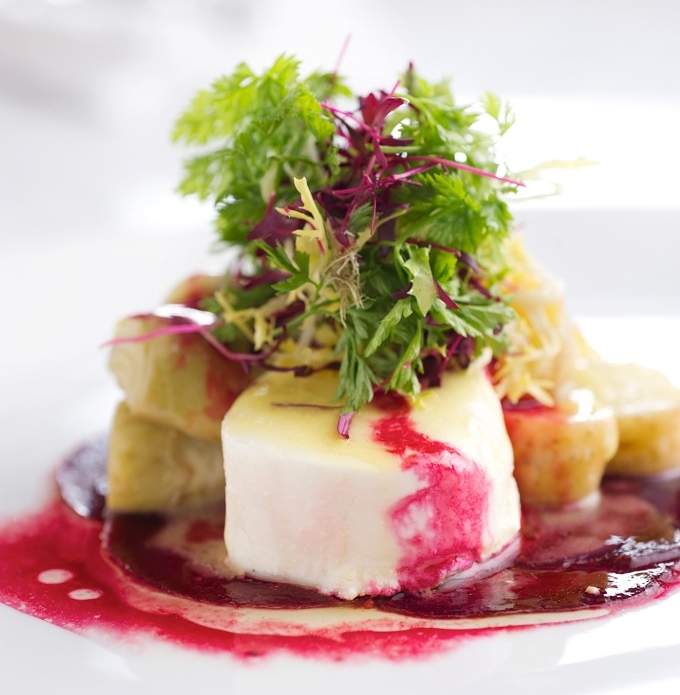 Of the salads, we opted for Borscht Salad, a clever reference to the aforementioned Borscht Belt and the once favored (by our grandparents) magenta root veggie. Marinated, tangy goat cheese accompanied simply prepared beets and fingerling potatoes on a bed of greens with a colorful dressing of macerated beet vinaigrette.

Latkes are another familiar side dish and are offered under “Noshes for the Table”. This reference to “ordering for the table” was mentioned by Zach Kutsher in his midday talk I attended. When hotel guests wanted to take advantage of the “all you can eat” policy, they often ordered extra dishes “for the table”, in order to not appear glutinous. 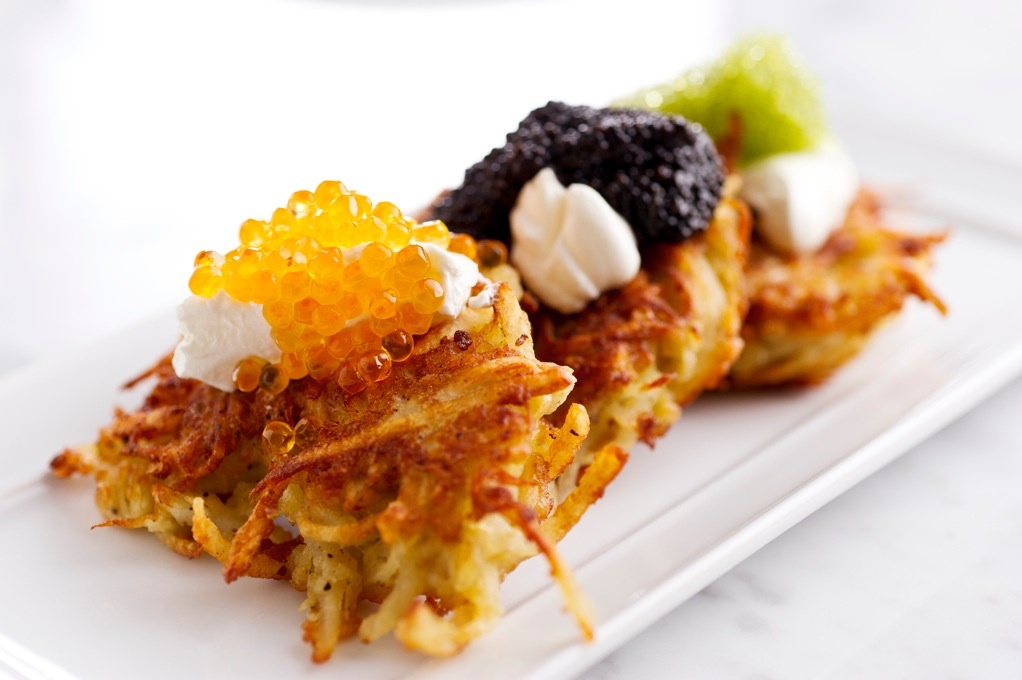 Here, “Crispy Potato Latkes” are just the right size, offering up a surface to be topped with “local apple compote” or “sour cream with 3 caviars”. Beautifully browned and crisp, the latkes are fun to share and summon up memories of family dining.

All around us, platters of “Friday Night Roast Chicken”, “The Works”, a loaded delicatessen platter, and “Mrs. K’s matzo ball soup” were being served. These dishes were  not in the cards for me, since this Kutsher’s (unlike the resort)  is not kosher.

Interestingly enough, the restaurant pays homage to the original kosher dining room by not serving pork or shellfish.

For entrees we ordered the “Wild Mushroom and Fresh Ricotta Kreplach”, another twist on the meat and onion filled dumplings we often ate floating in chicken soup for holidays. These were ravioli like and rich, with walnut pesto, olive oil shmaltz (a reference to chicken fat) and sharp sheep’s milk cheese.

I was anticipating more exciting flavors in the “Falafel Custed Salmon”, a great idea touching upon our Israeli connection and served with harissa and red pepper relish alongside cooling yogurt (raita?) infused with cucumbers and dill.  If the crust were spicier and needed the cooling, I would have liked it better.

We finished with tea and a plate of assorted cookies, including ruggelach, apricot jam filled hamentaschen, and chocolate dipped macaroons. We were stuffed but just needed “ a little something”.

Not to be overlooked is the cleverly appointed interior with plenty of  broad swaths of honed wood hearkening back to the wooded landscape of the resort. Groovy lighting from the 60’s is part of the fun and heightens the nostalgic vibe.

All in all, Kutsher’s Tribeca is well worth a visit. With the first three entrees on the menu being fish or veg, and plenty of starters and side dishes to choose from, eaters who are veg or Kosher Like Me can manage easily and happily here.

By the way, I suggested to the chef that he consider making a rich veg broth so that others who are Kosher Like Me might have something to float those gorgeous matzah balls in.  If anyone finds this on the menu, let me know.

Leave a Reply to Lisa