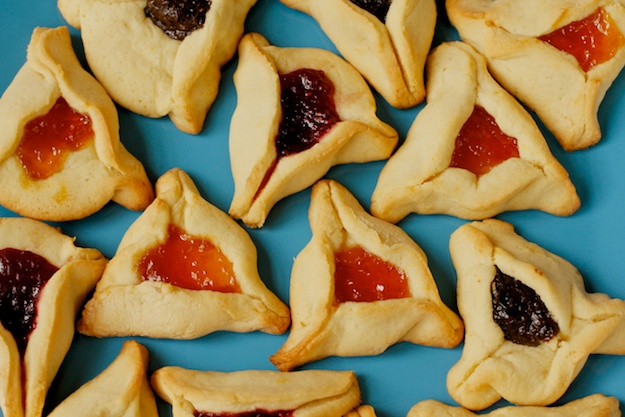 Hamantaschen: Delicious No Matter How You Spell It

Hamantaschen are delectable, triangular filled cookies eaten on the holiday of Purim.

While some think that these tasty folded treats resemble little hats, they are referred to as Oznei Haman in Hebrew and Orecchie d’Aman in Italian, in both cases meaning Haman’s EARS, not hats!

A little reminder of the story:  The Book of Esther or the Megillah is part of the Old Testament. It tells the story of a Jewish beauty named Esther who became queen of Persia and was able to thwart the king’s plan to kill the Jewish population. Her cousin, Mordechai, helped and encouraged her to devise the plan. The story took place during the rule of Ahasuerus (Xerxes), the Persian king who reined from 486-465.

The story is told through two identical readings of the Megillah on the eve of March 7 and the morning of March 8, this year.

Esther and Mordechai are celebrated as heroes while Haman’s (the one who devised the evil plan) name is drowned out with boo’s and deafening noise makers of all kinds, so that his name can barely be heard in the narrative. The kids, especially, love the craziness and noisy celebration along with the costumes and many sweet treats.

So, why are these addictive and scrumptious cookies triangular? 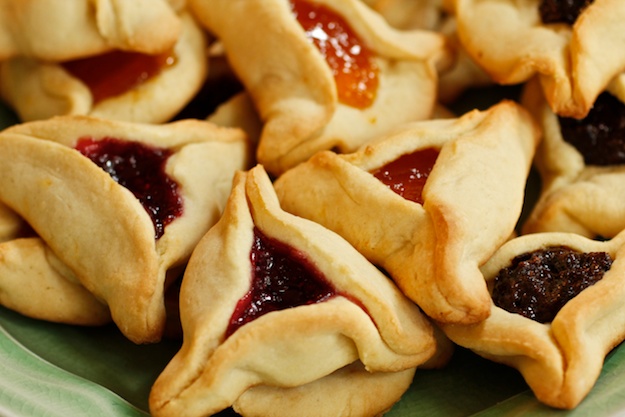 There was a practise of chopping of criminals’ ears before they were hung. As the plot twisted and reversed itself on the evil Haman, he was executed.  Gruesome, I know.

Traditionally, hamantaschen are filled with poppy-seed,  but there are plenty of variations on the dough and the filling.  Most doughs use oil or non-dairy margarine in order to keep this recipe parave (non-dairy).

I turned to my friend, Melissa Roberts, for her recipe and advice on how to make these treats. 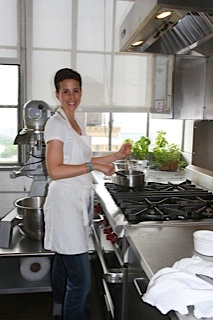 A recent Westport transplant from New York City, Melissa was a food editor at Gourmet developing and testing recipes in the magazine’s test kitchen. She was also a cook and stylist in the Food Network’s kitchen. Melissa now freelances as a recipe tester and writer for various magazines and websites including Bon Appetit, Health, Real Simple, gourmet.com, and ctbites.

Thanks for sharing this fabulous recipe and teaching me your tricks while baking these delicious treats together! 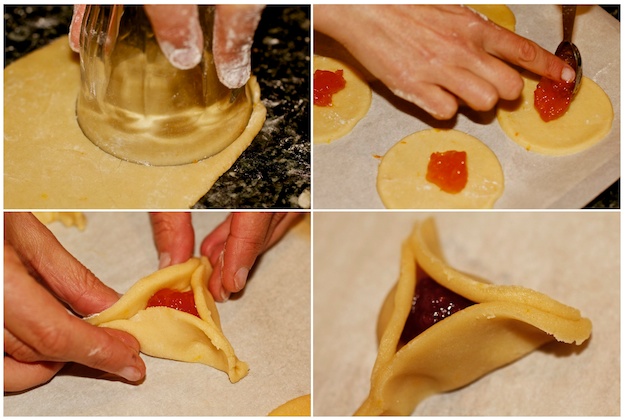 Special equipment: a 3 to 3 ½ inch round cookie cutter (the top of a wine or drinking glass also works well)

Whisk together flour, baking powder, and salt in a bowl.

In the bowl of an electric mixer, beat together butter and sugar at medium speed until light and fluffy. Add eggs, one at time, until incorporated, then beat in vanilla. Scrape down sides of bowl and add flour. Mix on low speed until a dough just comes together. Gather dough into a ball and flatten into a disk. Wrap tightly in plastic wrap and chill until firm, at least 3 hours or overnight.

Line a large baking sheet with parchment paper. Place rack in middle of oven and preheat to 375F.

Halve dough and keep remaining half chilled. On a lightly floured surface, roll dough with a floured rolling pin to ¼ inch thickness (about 10 inch round), dusting surface with flour as necessary. Cut out as many rounds as possible and transfer to baking sheet, arranging them ½ inch apart. Reroll scraps and cut out more rounds. Put 1 tsp filling in center of each round and fold up edges to form a triangular shape, pinching corners together tightly but leaving filling exposed.

Bake until pale golden, 12 to 14 minutes. Cool on baking sheet on a rack 5 minutes, then transfer cookies to rack to cool completely. Make more hamantaschen in same manner on cooled baking sheet lined with fresh parchment.