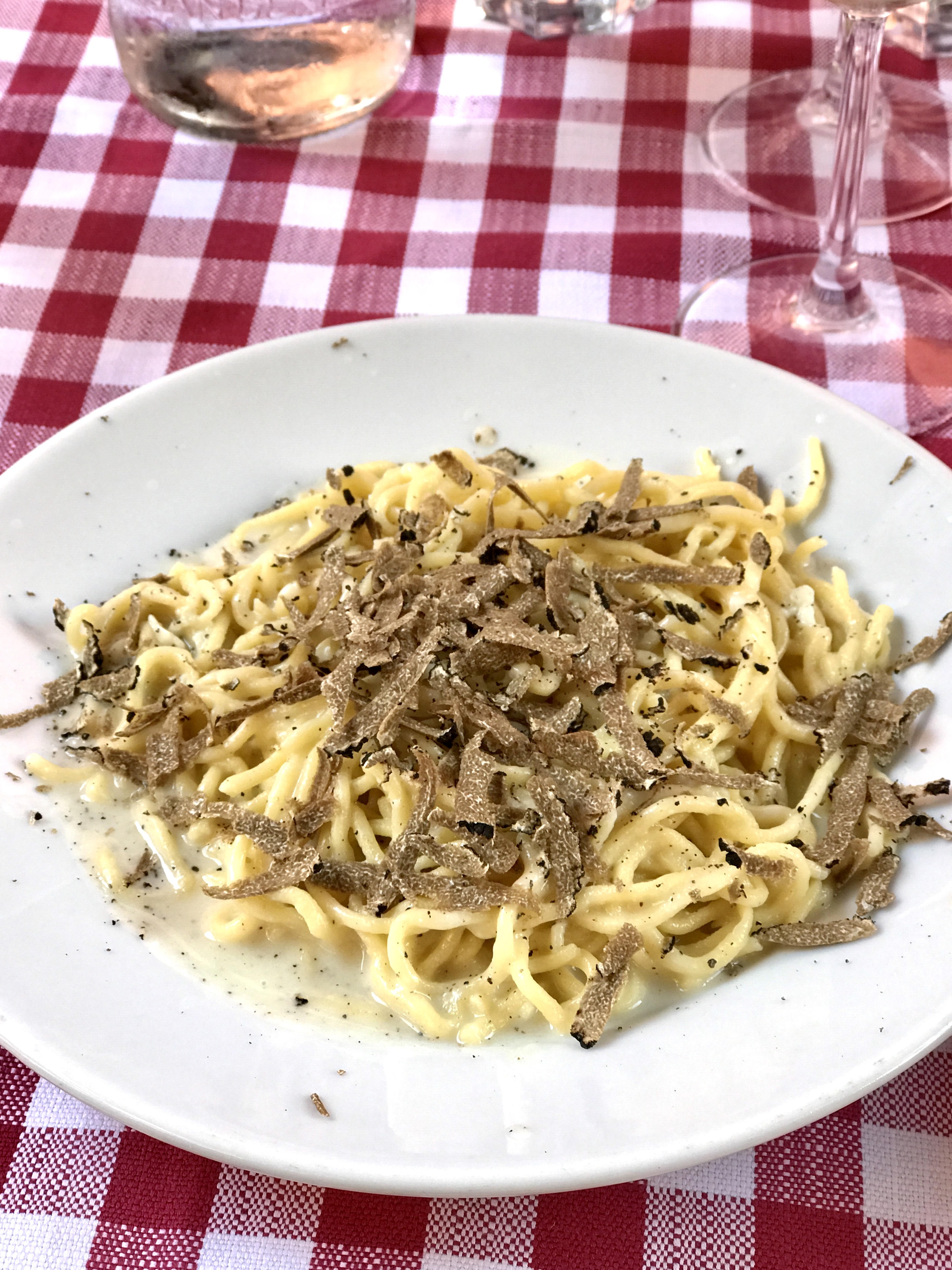 We ate at least one bowl of Cacio e Pepe Pasta every day while in Rome a few weeks ago. That seems like a lot, I know. True confession: sometimes, I even ate it twice a day. It’s a Roman classic that’s on every menu and one of the few, if not only, vegetarian pasta dishes found at many restaurants. This addictive sauce of parmesan cheese, butter and plenty of black pepper was thoroughly enticing in its creamy, slightly salty simplicity.

While we were in peak truffle season in October, we ate plenty of shaved truffles over our pasta, too. Italian truffles are certainly a prized seasonal ingredient, but they aren’t treated as preciously as they are in the USA. We’ve never seen a scale used to weigh our fungi topping (I hate that), although sometimes there’s a surcharge (OK with that).

We never ran into pasta dishes with veggies mixed in, but found our veggie fix by ordering sautéed cicoria, dark, slightly bitter, wild greens (kinda like dandelion greens) that are omnipresent in the Roman countryside. Sometimes we found antipasti options that offered all kinds of goodies for kosher leaning folks like us.

Let’s just say that we ate a lot of Cacio e Pepe and sautéed greens.

Scroll down for recipe that will transport you there.

For this version of Cacio e Pepe Pasta we’re suggesting roasting Hen of the Woods or Maitake (the Japanese name for the same) mushrooms. You’ll find these umami rich, highly aromatic mushrooms at outdoor markets in the USA throughout autumn.  Sub in cremini or porcini if you can’t find Hen of the Woods but their unique texture and feathery beauty are worth seeking out.

While you may top your pasta with these crispy Hen of the Woods ‘shrooms, consider using this same recipe but blitzing the roasted mushrooms in a processor and using the pureed mushrooms in a blended sauce to coat penne or any tube pasta with ridges. This would be especially appropriate if using less expensive and less distinctive varieties, like portobellos.

You can’t go wrong, either way.

For all natural kosher cheeses, including aged parmesan that you’ll need for this recipe, we suggest you purchase from our friends at Grow and Behold.

For more on our travels to Rome and specifically our time in the Roman Jewish ghetto, scroll down or click here.

For more on Italian Jewish cuisine, consider one of my favorites (and one of my first cookbook purchases), Classic Italian Jewish Cooking: Traditional Recipes and Menus, by Edda Servi Machlin (kosher). This volume is part memoir, part cookbook and details the rich culinary history of the Jews of Pittigliano in Tuscany.

For more on Roman cuisine, check out Tasting Rome: Fresh Flavors and Forgotten Recipes from an Ancient City by American transplants, Katie Parla and Kristina Gill. While this is not a kosher cookbook, it has two rich sections on Roman Jewish cuisine; one illuminates ancient traditions and recipes and the other details newer influences as a result of the influx of Jews from hostile Middle Eastern countries.

Cacio e Pepe pasta is a Roman classic that's deceptively simple. The sauce is made with butter, cheese and lots of fresh cracked pepper. This modified recipe (really more American in the choice of mushrooms) includes seasonal Hen of the Woods mushrooms. Find these mushrooms (also called Maitake) at farmers' markets across the USA in the autumn.

Bring a large pot of salted water to a boil. Cook the pasta according to package directions.

Grate the Parmesan cheese into a large mixing bowl. Add the pepper and butter to the bowl.

Drain the pasta, reserving a 1/2 cup of the water. Add the cooked pasta to the bowl and drizzle with water until the sauce reaches an appealing texture. Toss gently until combined, adding more water if needed.

Break mushroom bunches into pieces and arrange in single layer on a parchment lined sheet pan. Distribute garlic, salt and black pepper over the mushrooms.

Roast 15-20 minutes, until the mushrooms are crispy around the edges and soft in the center.

Top the pasta with the roasted mushrooms, additional Parmesan cheese and cracked black pepper and serve.

When salting water for pasta, add enough salt so that the water tastes like ocean. YES. That's a lotta salt and it's important.

Never forget to reserve pasta cooking water by placing a heatproof glass measuring cup right into your colander in the sink. Pour off some of that starchy cooking water into the cup, set aside, and continue draining pasta through colander.