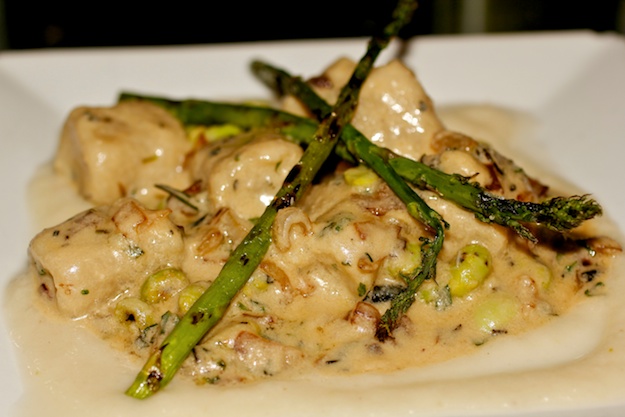 Blossom Keeps Me Coming Back For More

Naysayers may ask, “If it is vegan, what is there to eat, really?!”
Think vegan is bland and limited in choices?  Think again.
Blossom has been on the  NYC restaurant scene since 2005. I have trouble imagining the dining landscape without it.  There are a number of great (yes, I said it) vegan restaurants in NYC and I count Blossom as one of them.

As one who avoids all animal products that are not kosher, I relish having an entire menu to choose from. Yup. It is like a celebration and I get a little giddy when the entire menu is fair game for me. No need to ask tons of prying questions here.

Blossom has morphed slightly as it grows the number of its outposts. The owners, Pamela Blackwell and Ronen Seri , remain razor sharp in their focus on vegan, seasonal, organic preparations. While the concept of eating animal free products never changes, the expansion into various neighborhoods, as cafes, juice bars, fast food joints and dessert spots, changes the vibe a bit.

The original Blossom opened on Ninth Ave. in Chelsea only seven years ago. Set in a bi-level brownstone with a cozy fireplace, the vibe says, “relax and retreat from this highly trafficked neighborhood.”

Blossom du Jour is self described as “shrewd fast food”. Diners may grab it on the go, but the kitchen is surely working long and hard to prepare choices like “The Little Italy”.

I would fight the frigid winds howling across Central Park right now for this vegan take on the meatball hero from the corner market of my childhood.  I hanker for steaming, saucy, vegan meatballs smothered in sauteed peppers,onions and vegan cheese, all topped with homemade marinara sauce. YUM.

I checked out my fave Blossom spot, on Columbus Ave. between 82/83, for lunch recently and caught the autumnal menu before the winter menu arrived in mid-December. 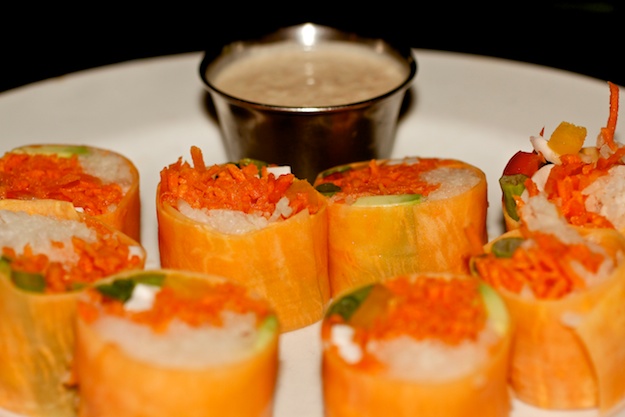 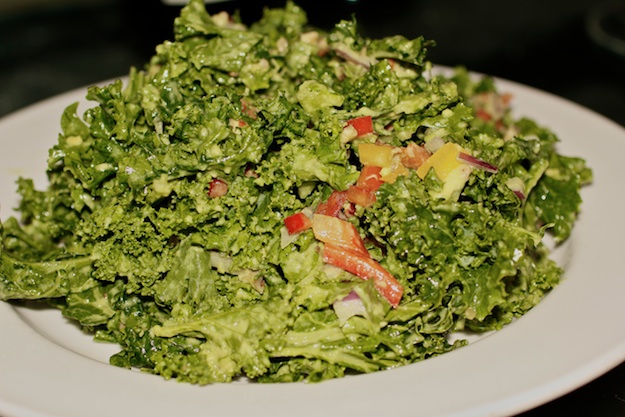 A huge pile of raw kale salad is only for the kale lovers in the crowd.  I relished the flavorful and well dressed mound.

The bone chilling rain had us pining for something warm. My dining companion, a friend who is kosher like me, suggested that we try something heartier and hot. 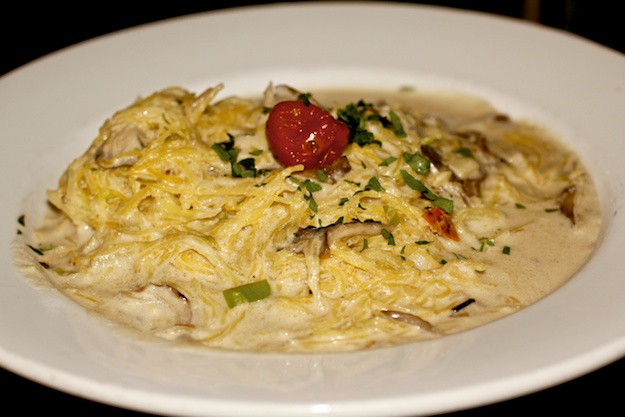 The spaghetti squash and gnocchi entrees were rich with nut butter based sauces and an array of green veggies which brightened the mild and rich creaminess. I loved the abundance of wild mushrooms so generously integrated into the spaghetti squash Alfredo.

We returned last week on a frigid evening and sought refuge as far from the front door as we could. 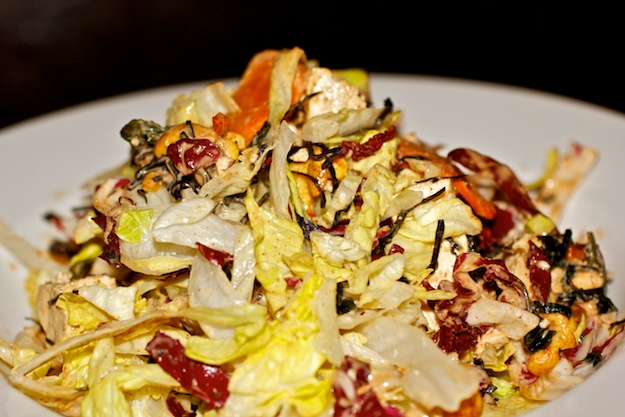 There was such great texture that I quickly rebounded from the inclusion of iceberg lettuce, realizing that it lent great crunch. The creamy peanut dressing added kick. Talk about a plate of health! 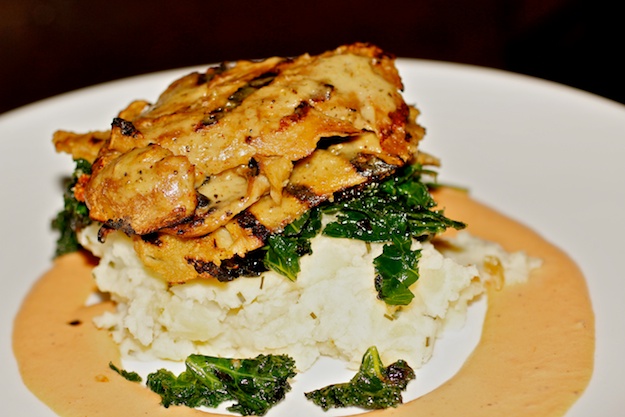 Of our two entrees, I preferred the Lemon Peppercorn Grilled Seitan with chive mash and sauteed garlic kale. Fresh crushed tomatoes blended with cashew cream to create a lovely, mild sauce. The seitan had an eggplant like texture that was pleasing and substantial.

Desserts without egg or dairy? Blossom has nailed it with a selection of cakes baked in house beginning at 5 AM, daily. 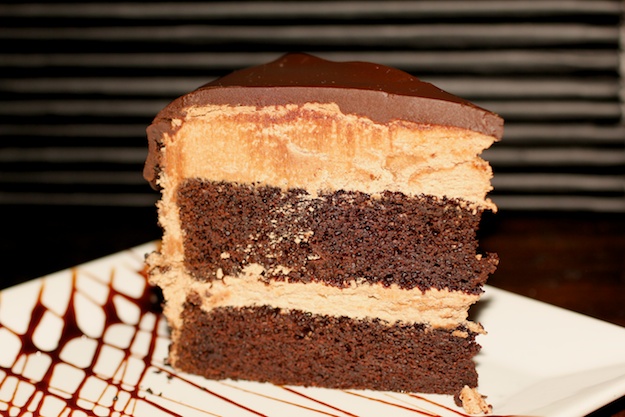 At lunch, E. and I indulged in the chocolate layer cake and agreed that it could compete with any dairy cake we have eaten.

At dinner, M. and I couldn’t resist the carrot cake with creamy tofu spiced frosting. Three cashew ice cream flavors were offered. We opted for ginger molasses over chocolate peppermint or coffee. I would have preferred a spicier kick from the ginger rather than a prominence of molasses but the honest to goodness creaminess is a feat not to be taken lightly. 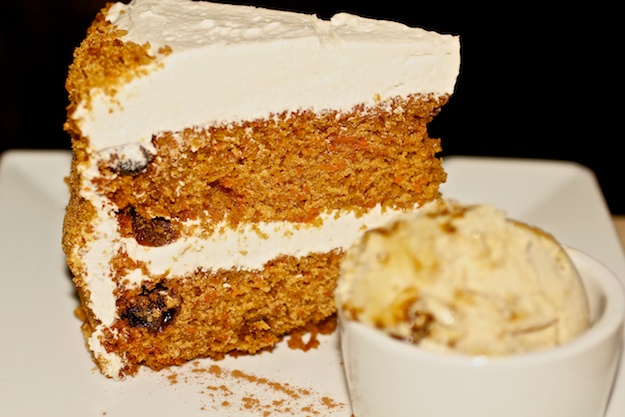 For vegans, vegetarians, those who are kosher and those wanting to cut back on fat and all things artificial, check out any of the Blossom locations.  You won’t be disappointed.

Note: Blossom is certified vegan and parave by the International Kosher Council. They serve both organic and kosher wines in addition to artisanal beer.