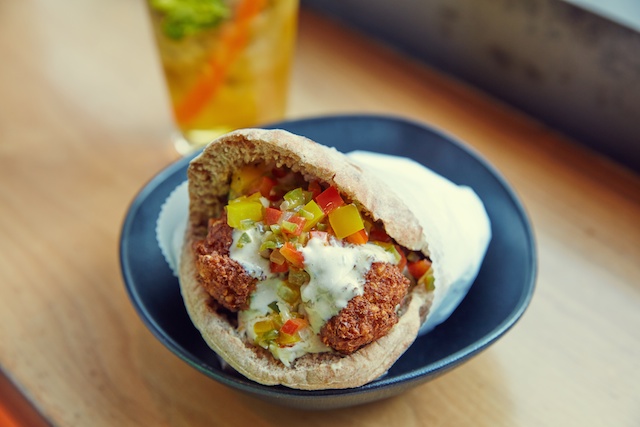 I know I promised you more on my noshing adventures in Israel (watch for it next week) but suddenly I realized that I have neglected to share something BIG with you falafel lovers living here in the USA!

In September, Chef Einat Admony of Taim, Balaboosta, Bar Bolonat and Top Chef fame kicked off a 12 month series of creative, out o’ the box falafel challenges with some of the most exciting big name chefs around. Each month from September 2016- August 2017, Einat asked one chef to dream up a unique falafel recipe that is then served at Taim locations in NYC. Each creation is served for one month only.

And how great is this? Each chef choses a charity that will receive $1. from every (special of the month) falafel sold!

Here’s how the series started and what you can calendar for the next eight months of falafel madness coming up. Taim announces more about each creation at the end of the month so you can schedule your visits. Yes, there are some of us who will actually do just that.

In September Mario Batali launched the series with White Bean and Fennel Pollen Falafel with Spicy Jalepeno Peporanata. His cause was Mario Batali Foundation. Other chefs who have participated so far are Amanda Freitag, Bobby Flay and Gail Simmons.

Bobby Flay and Einat have plenty of falafel history between them as you may remember from the THROWDOWN Flay challenged Einat to. Remember who won? RIGHT! The falafel genius, herself!

When Flay created his November falafel he combined black bean falafel with avocado- smoked chile relish and pomegranate yogurt crema with goat cheese. If star power helps bring in the customers, all the better for their chosen charities.

Here’s the all-star lineup of chefs coming up in 2017.

Start with Molly Yeh and get ye to TAIM before January ends. Molly was a real friend and shared her recipe for falafel with preserved lemon yogurt, spicy pickled onions and fresh mint with lil’ ol’ us!

Watch for the recipe here on Thursday! Molly included everything you need to whip up this creation from scratch: homebaked pita, falafel, pickled red onions and yogurt flavored with preserved lemons. WOW!

Cause I know you may want to plan, here’s the upcoming falafel line-up and the chefs dreaming up these creations:

Note: Taim, NYC is vegetarian, often vegan and has gluten-free options. It is certified kosher by United Kosher Supervision.

We’ve written about Einat a few times including this post about her cookbook and her Mom’s recipe for Chicken with Walnuts and Pomegranates. Check it out!

Leave a Reply to Hindy Garfinkel